Blog Snake.io Snakes its Claim as a Top Advertiser 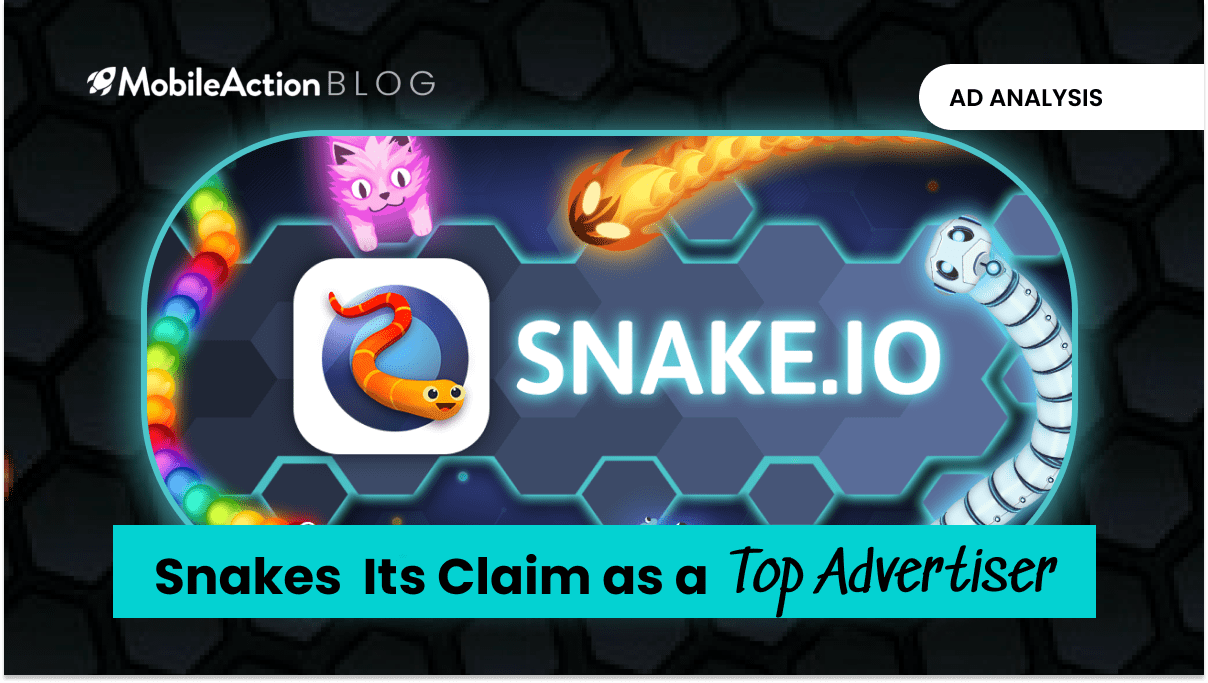 What is Snake.io? This snake game is a part of a group of snake games available in mobile game stores. These games date way back to when we all had flip phones and all we could do when we were bored was to try and make a little pixelated line get as long as possible without running into our own tails. Those were the days! Well, the snake game has persisted. And this specific snake game is 23rd overall in advertising right now!

Let’s take a look at mobile ad intelligence to see how this top advertiser is running their campaign.

Firstly we can see that the game is well-liked with a much larger percentage of green reviews than otherwise. Snake.io also has a very solid visibility score of 88! Nice going!

As shown by our mobile app intelligence, the app has good reviews. Good app reviews are good for app store optimization. Not only are their reviews good, but they are also frequent.

Snake.io has been successfully slithering up the ranks in its category. The app has had its good days and bad but is generally gaining traction this month. Its advertising strategy must be working. What does our mobile app store marketing intelligence tell us about this?

Hopefully, it will be able to maintain the momentum and continue to climb. Let’s see what we are working with in terms of a Campaign.

This top advertiser puts most of its ad efforts into AdMob. Snake.io also uses Applovin and MoPub for its mobile marketing campaign.

The app is marketed across 13 networks. The drastic difference between the percentages in these places indicates that they are seeing real benefit from the first few, and the others may be for testing purposes.

Other snake games on the market at the moment have a much lower publisher count. Most of the top advertisers have creative counts in the tens of thousands. You can see detailed creative count comparisons in out latest report on Mobile Advertising Trends 2021.

For a top advertiser, they have a relatively lower creative and active creative count.

This may be due to the nature of their creatives, the nature of their targeted users, or both. A top advertiser like this will use fewer creatives when they know specifically what works and what doesn’t already. This is because they may have performed some A/B tests and therefore know what works on their target audience. Sometimes top advertisers will also have fewer iterations of their creative if the game or app is VERY straightforward, or if they are only targeting a few different types of people.

Basically the ad has to fit all potential users.

Over the past month, Snake.io has started removing emphasis from AdMob, and Mintegral and Applovin’ are taking its place. All of this changing in strategy signifies that they are probably at the beginning of a new campaign. This fits with the change in geographical emphasis.

The still image creatives for this campaign all seem to be fairly similar in style and color. They feature gameplay as well as the customizability of the snakes.

The application is in a well-known genre of game, namely games. Games like snake io can be found across both stores.

All of us can recognize snakes from our pasts if not the recent trend in snake games. This means that their creatives can mostly focus on how fun and colorful the little snakes are. The question for this demographic is not how do you play snake.io but rather, is it worth it? The job of the creatives for this group becomes about displaying why this app is of good quality.

The two different styles of ads and the emphasis on customizability are simple enough but have clearly been effective thus far.

If we think back to the ratings from earlier this strategy makes sense. The game is delivering a very specific product and it is doing this well. There is no need for them to go too wild with the ads. All they have to do is say “hey do you like snake games?” and their visuals speak for themselves.

There are also video creatives that tend to center around gameplay. These demonstrate how the game looks in a sped-up version of what typical gameplay might look like.

People are downloading it and liking it. Some of the creatives even say “no lag and smooth gameplay” so they know their strengths and are showing them off.

What To Learn from Snake.io

In all, this strategy emphasises simplicity and clarity overall. The creatives are to the point and confident in the product they offer. This paired with the expansion towards wider audiences, is a solid strategy. The game also targets many age groups. It is both familiar to older people who remember playing on their flip phones, and fun for new players who haven’t heard of snake games before.

For more insights schedule a demo and we will keep you posted!

« Should You Target Singular or Plural Keywords for ASO?
How to Respond to App Store Reviews to Boost ASO »