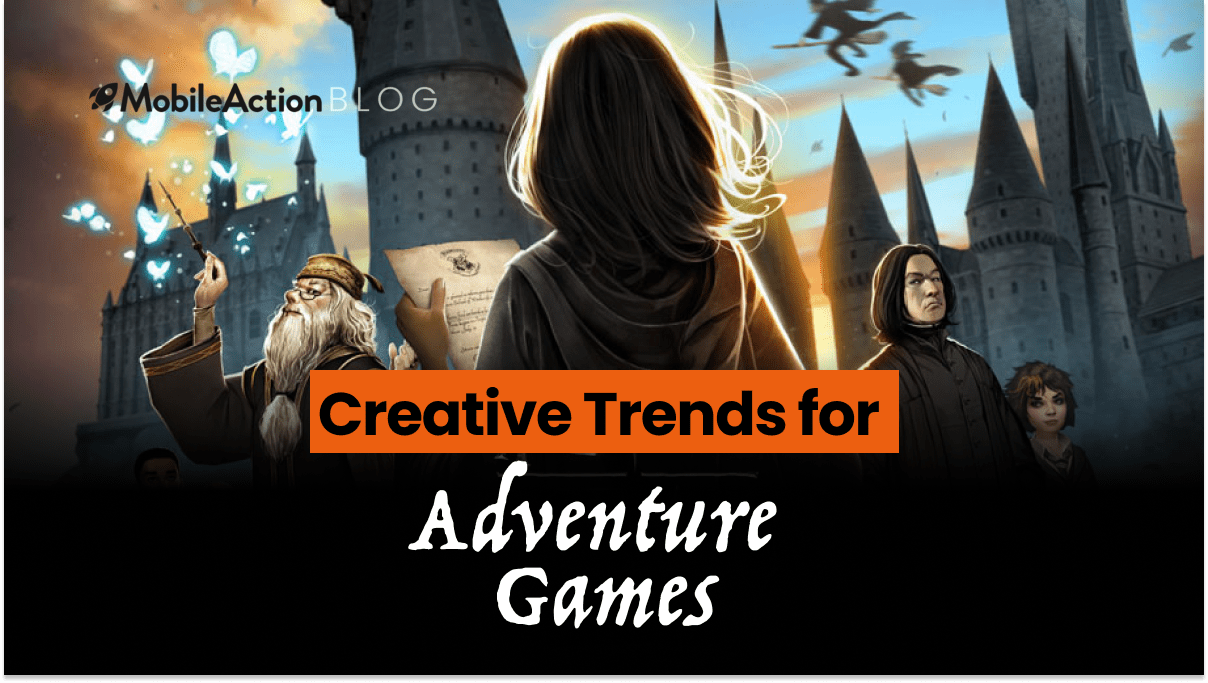 What are the trends for Adventure game publishers?

Adventure games, also known as Point-and-click adventure games, put an emphasis on storytelling, and, like with Harry Potter: Hogwarts Mystery, can provide the user with an expanded immersion in a fictional universe they may already be invested in.

These games are popular online and as console games, but their prevalence in applications, while perhaps fewer in numbers, cannot be ignored. In fact, applications are the perfect place to play an adventure game. It is right there on your phone, you don’t have to leave it to go about your day.

We collected this list of top publishers from MobileAction’s Ad intelligence tool and you can go check it out as well if you are interested in seeing what any games that we did not cover are up to.

It should also be noted that we covered specifically adventure games, not the creative statistics for these publishers as a whole. With no exceptions, these publishers had at least one other genre of game.

The publishers that we examined for this creative trends analysis are the following.

In the Top Publishers, there was only one app per publisher that we have selected that fit the criteria and was available in both stores.

Special mentions go to Jam City which has Harry Potter: Hogwarts Mystery but also includes Family Guy The Quest for Stuff. However, we did not include it in the list because it has a relatively smaller campaign with a much more specific target audience of predominantly the United States, Canada, Australia, and the United Kingdom. It still has a large set of creatives and will be discussed further in the creative analysis section.

DeusesCraft has three adventure games but only one of these was available in both the App Store and the play store at the time of writing this post.

Helio Games is Also a top publisher with the same effect. We did not include Mutiny: Pirate Survival RPG for this reason.

This is a creative trend in and of itself. About half of the top Adventure game publishers have one adventure game which is still growing or in the works at the moment, or which is popular in one store but has not yet been launched in the other.

It is important to keep some terminology in mind when reading this post, so we have included a little glossary that you can look back at if you get lost in the post.

Active creative count: The number of creatives that are currently being used.

The data below is from Campaign Analysis from our Ad Intelligence tool. To get insights about any app in different categories, schedule a demo with us.

What we can see here is that Adventure games have a huge percentage of total creatives in proportion to their active creatives in both stores. This demonstrates that these apps are generally doing a lot of testing to see what works for them and then reducing the number, just using what works well.

The apps with the least total creatives have the highest ratios between active and total. This means that the ads that they did have were deemed successful and have mostly continued to run with few adjustments.

There is not a clear trend indicating which store has a larger percentage of their total creatives active. But most of the apps are close between stores.

There is a very clear trend in both stores away from playable creatives. The split between HTML, Image, and Video tends to be a little different from app to app. However, there is a trend towards video.

Looking at the graphs we can see that there is indeed a slight preference for video in the App Store. There are also slightly more playable creatives in the Play Store. Generally, the trend looks similar across both.

Looking at the averages in Ad Publisher counts we can see that there is a huge variety in the different games and between both stores as well. This may be because Adventure games are highly individual. Just like a book preference or a film preference, each adventure game has its own unique user base with its own traits and habits. This will also have an effect on publisher count. Harry Potter: Hogwarts Mystery may have a larger count on most metrics because of the popularity of its source material.

The difference in ad networks between stores shows that the App Store versions of each app are usually advertised on less ad networks. The biggest difference being with Genshin Impact and Grand Hotel Mania.

Though this seems like a pretty even spread between apps, we get something interesting when we look at every top ad network across both stores.

The most used ad network was Facebook in all but four cases. This means that in general, most adventure apps are advertising the most on Facebook.  Facebook has a huge network consisting of Instagram and Messenger, it might be a good idea to use it for test purposes.

Both games from this publisher are expansions of existing source material. Let’s see how these games use this to engage their respective audiences.

This app calls upon the users imagination, inserting the user into the Harry Potter world. This is a great strategy that has also worked for other material in the past outside of the app world like the Pottermore Website.

This app takes things a step further by allowing users to be part of the narrative as well and to interact with all of their favorite characters.

The creatives show the user how they will be able to virtually attend this school of witchcraft and wizardry. Some of the creatives tell the user to discover their house. Others demonstrate the house via the colors of the ad and highlighted words. Loyalty and Yellow being associated with Hufflepuff, Bravery with Gryffindor, Ambition and green with Slytherin and so on. They also show off aspects of the game. From these screenshots, we can see that there will be a series of mini-games. These will happen along the way to progressing through our time at Hogwarts.

Family Guy: The quest for stuff

This game has a far simpler approach. The creatives are obviously tailored for a very different audience. This makes sense. Both these games are made for the fans of each fictional universe and should be tailored to best suit those groups.

The Family guy creatives emphasize collection, show off classic characters, and offer deals on in-game currency in their creatives.

What to Take Away From Top Adventure Game Publishers

It may have been easier to have one specific takeaway from all these games! However, what we can see about Adventure games is that they are highly specific to their individual target audiences. Oh, and they don’t really use many playable creatives and usually advertise on Facebook!

To further examine one specific game or to look at more trends in the future, sign up for a demo