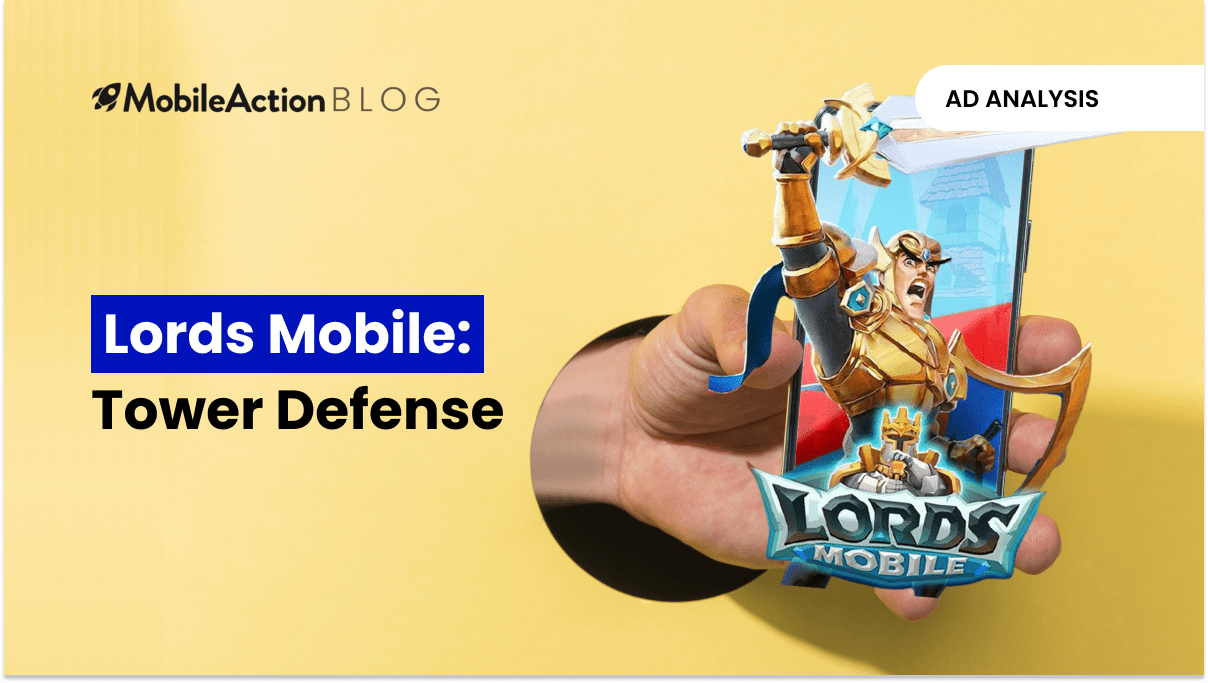 Mobile Games increased their popularity greatly during the last year. With the recent pandemic, we’re more inclined to spend more time on our mobile devices. Which makes us more likely to play mobile games to cure our boredom. Naturally, the competition within the mobile advertising environment also peaked.

However, even with the increased competition in the “Games” category, some apps manage to climb up the ranks easier than others. Lords Mobile Tower Defense is one of those lucky games, now the question is, is it luck or is it a clever mobile advertising strategy they apply to climb up the ladders of success? In this post, we will focus on Lords Mobile’s Ad Analysis and talk about what Lord’s Mobile Tower Defense has done successfully (and differently) in its paid growth strategy.

Let’s take a look at the game itself. Lords Mobile Tower Defense is a strategy game, which lets you build armies, conquer the enemy land, and build an empire. The game does not have a ton of in-app purchases and it gives you a decent amount of playtime with the daily default energy refill. But surely, a good gameplay experience is never enough to get listed higher in the rankings.

In a world where almost everything has been done before, it’s usually the marketing strategy you implement that can make or break a game.

So let’s dive deeper into the reasons why Lords Mobile Tower Defense has reached the success they have now.

Yes, Lords Mobile is not the first game IGG.COM has published.

Their previous experiences in the mobile gaming sector make it possible for them to convert their past users to new users. As you can see through our Market Intelligence tool, they have previously published 20 apps in the App Store.

Considering the fact that many of their older games are action-based RPGs, it wouldn’t be hard for IGG.COM to increase their TTR for Lords Mobile creatives by publishing ads and prompts on their older games. Cross-promotion is always a great way to attract new users.

But that’s not the only thing they did right.

They utilized a massive amount of advertising. They had 1398 different ad creatives, and 18.013 ad publishers in total. This means that mobile app users can get a glimpse of the game, wherever they look.

If they published dishonest creatives which really weren’t based on the actual gameplay of their app, they’d probably get a lot of backlash and bad reviews on the Apple Store.

Luckily for them, IGG.COM did not take that path. Many reviews show that the users are satisfied with how ads are consistent with the actual gameplay, therefore it’s safe to say that they implemented a successful mobile advertising method.

It’s not only the honesty that attracts users, it’s also the content of their creatives. They did focus mostly on battlegrounds, the battle aspect of their game.

That means that they discovered their audience is mostly intrigued in the battlefield aspect of the game, and decided to showcase that part of the game. We can instantly see some examples through our Mobile Ad Intelligence product.

It’s clever to give the audience what they wanted all along. Showing the potential players real screenshots from the battles increased Lords Mobile Tower Defense’s perceived integrity, therefore increasing their trustworthiness as a brand. Showing integrity always counts for good mobile advertising, along with happy clients.

They reply. They care.

Every app out there gets a bad review every once in a while. Some even more than others. Although it’s common to think that a bad review leaves a stain on your game/app, that’s not always the case.

A bad review opens a way for improvement, you just need to know how to reply to those bad comments. IGG.COM does that quite skillfully, for Lords Mobile Tower Defense. The team takes the time to reply to all those bad app ratings and reviews. They tell the users they care for their feedback and will take their opinions into consideration. Which is a great way to win the user back!

A lot of apps do bid on their competitor’s brand keywords, which usually ends up putting them higher up the rank. Lords Mobile Tower Defense is one of the games that apply the tactic. Although their keywords are quite specific, bidding on “clash of clans” was a clever user acquisition strategy after all.

For a company who’s confident in their own app, it’s safe to assume that a user who wants to play another game can also quite like Lords Mobile Tower Defense, and would download the app after all.  Lords Mobile is highly active on Apple Search Ads, running ads in 37 countries. They also make sure to bid on the brand keywords of their competitors.