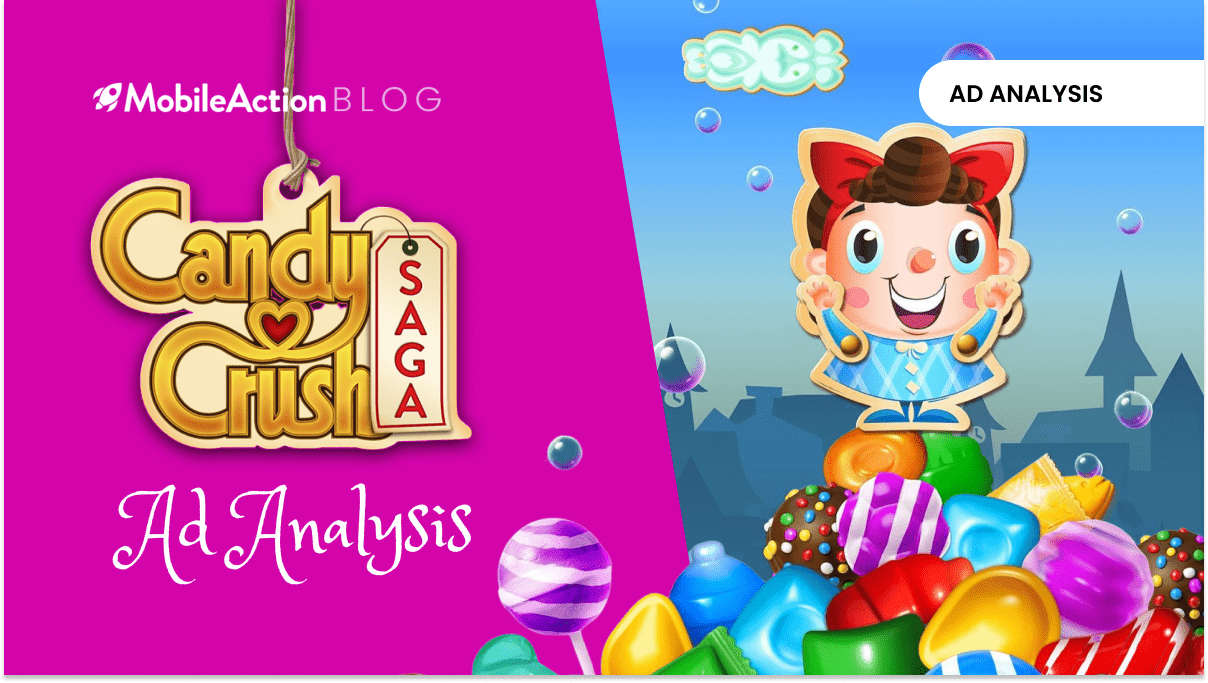 If you are here to learn how to market your mobile game, stick with me. I have a great case for us to study.

There are few things in the world that are as popular as the tv show Friends or Netflix. Almost everybody has heard of these two, right? And, when it comes to mobile games, we cannot help but mention Candy Crush Saga.

It wouldn’t be too far-fetched to claim Candy Crush Saga started the entire match-three craze. There was a total madness when it first launched back in 2012 as everybody was swiping candies on their phones In 2021, people are still playing Candy Crush Saga.

Don’t believe me? Check their category rankings and see for yourself.

Developed by King, it is one of the most addicting games ever. And now it is time for us to uncover their mobile app marketing strategies.

Candy Crush Saga is currently the 4th Top Advertiser in the App Store. They are currently using twelve ad networks and running ads on more than 17.000 apps. It would not be wrong to say that they are truly everywhere.

Now let’s take a look at their creatives. Our Ad Intelligence tool shows that they met users with more than twelve hundred creatives in the first week of August 2021

Their distribution share fluctuates in time but as you can see in the following, they mainly run ads in the United States of America.

While one of their biggest rivals, Toon Blast is translating their creatives to all languages, Candy Crush Saga is not following this strategy.

As you can see, all of their creatives seem to be in English although they run ads in more than 45 countries.

However, we can see that they are localizing their product pages for countries with different languages.

Even though Candy Crush is a huge brand name with years of presence in the market, we can see that paid mobile user acquisition strategies are still critical for their efforts. Now let’s take a deeper look at their mobile ad creatives and try to gather insights about how to market a mobile game app from an industry leader.

Remember, marketing is about attracting people. But if we use misleading creatives to attract users, this might backfire on our user acquisition strategy.

Let’s explore this suggestion with an example. Most games are trying to attract users with unrealistic creatives. They show a video for an interesting game and when you click the ad, you face a completely different app. This tedious act won’t do any good to your marketing campaign. Since most of these people who clicked your ad will probably delete it afterward.

That is why we should always ensure that our ad creatives reflect our actual game. Since people would get offended due to misleading ad creatives. As a result, we may get negative comments even though our game is remarkably good.

As you can see, the user is happy with the real game, but because of the false advertising, the very same user gave one star to the app.

As you can see, they are displaying their actual gameplay. Because it is an engaging game with colorful graphics and attractive visuals, their creatives also look very pleasing to the eye. And, this is how we should market our game, too.

Another example of a/b testing for their mobile app marketing strategy is in the following image.

As you can see, they are testing their creatives with different headings, different color sets to see which one gets the best response from users.

The Power of the Brand

As we mentioned above, Candy Crush Saga is running tons of ads. Meaning that we are going to come across to their creatives one way or another. Additionally, they are also running Apple Search Ads.

As you can see in our Search Ads Intelligence tool, Candy Crush has an impression share in most of the high traffic keywords. Although it does not have the most impression share, displaying your ad at the top of the search results can bring satisfying results, especially for such popular keywords.

We can see that over 600 thousand apps organically rank for the keyword ‘games’. By using Apple Search Ads, Candy Crush Saga skips the organic line and appears in front of these apps.

Another interesting detail is that Candy Crush Saga has low impressions for its own brand keywords.

Let’s elaborate on this with the following example.

Even though Candy Crush organically ranks in the top 3 for its own brand keyword, competitors can still steal some of their potential users by using Apple Search Ads. That is why no matter how big your brand name is, Apple Search Ads can be a great tool to protect yourself from competitors.

It might take some time to build a brand name as big as Candy Crush, but using our app intelligence tools, you can scale your mobile business at breakneck speed.

If you are also wondering about how to market your mobile game,  schedule a demo with us today and let’s start growing together!