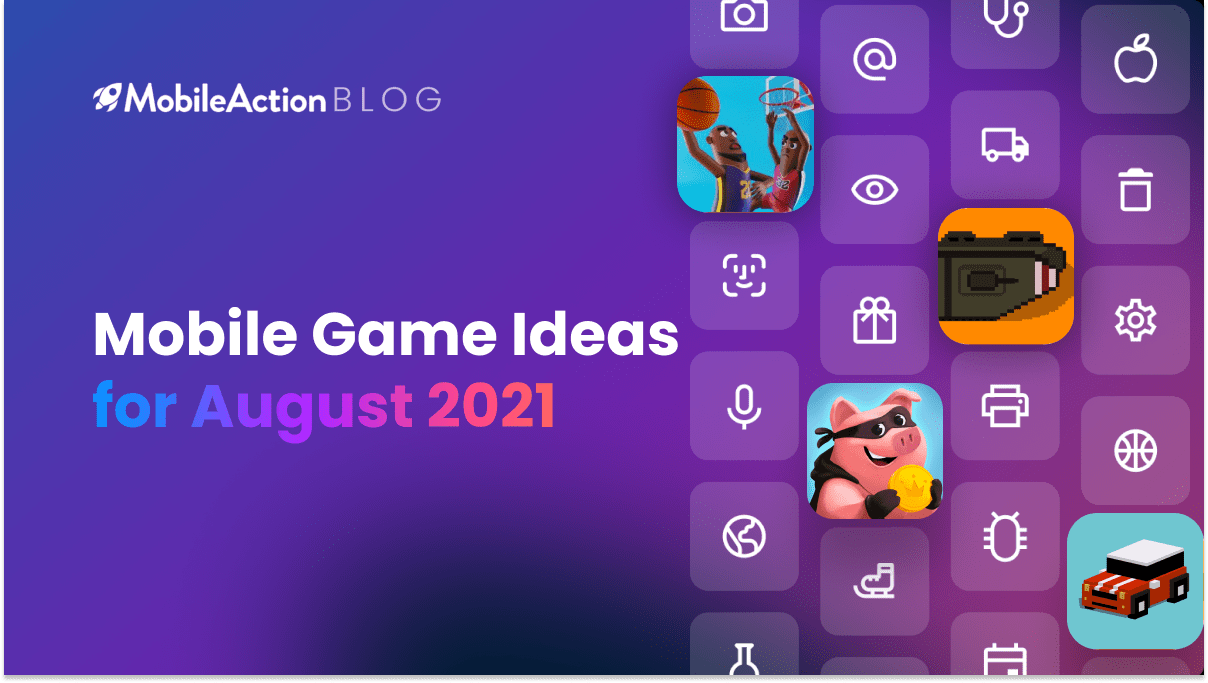 We know that finding new mobile game ideas can be tough. After a little research using our App Intelligence, we selected four standout games to share with you. We hope that these interesting games will give you inspiration so you can design your own addicting mobile games!

Block’em all is a game about blocking the shots. Simple enough, right? Well, that is also how the publishers describe their game. As long as users understand what your game is about, you are good to go.

Rollic games also stuck with this game idea and supported it with cool and easy gameplay with nice graphics. Landing in the top ten for action and sports game categories shows us that their decision was on point.

Also in this graph, we can see that they were a contender for the number one spot even from the beginning. Today, the app is ranking second on the Top Charts in the Sports category.

As the name suggests, casual games should be simple. As long as you can come up with the right idea, the correct execution with a proper app marketing strategy can bring tremendous results.

Coin Master is another success story. It has a visibility score of 82 and its creatives are catchy and clear. It is important to clearly express what your game is about and arouse interest at the same time in your ad creatives.

As you can see, Coin Master is an Adventure game where you build your forces and attack others. Spin the wheel for upgrades, plan raids, attack, and conquer the world village by village. We are all familiar with the type.

But as you can see in the graph below, it is sitting comfortably at the top of almost all related categories.

Taking old mobile game ideas and improving them a little with a slightly different concept can give you a very nice spot in the market.

Therefore, for new game ideas, you should constantly take the pulse of the market. If you know who the biggest movers are, who is in the top charts, and what kind of new apps there are, it will become much easier for you to position yourself in the market correctly.

Trench Warfare 1917 is one of the apps that increased its rankings dramatically in a short period of time. Their visibility score is 66 and its graphics are quite different from others.

However, Trench Warfare 1917 is the third biggest mover amongst all categories in the app store by advancing 1104 rankings. As you can see, over biggest mover tool can be quite valuable when digging for new mobile game ideas.

The game takes place during World War I and you have to survive in this fast-action paced strategy game. You can choose an empire to lead and dive into the war or you can build your own battleground with a difficulty you choose to fight the enemy.

Even though it is a pixel graphic game, it offers a sandbox experience and easy gameplay. Plus, its rapid increase in the category rankings shows us that being playable and fun is what users really care about.

This can be also seen in the ratings and reviews section. The average of 2566 ratings is close to a perfect five stars. Meaning that users are enjoying the game and have very little to none complain about the graphics.

So, just focusing on the graphic and tiny details might not be the best way to approach your new mobile game ideas.

Ever wanted to be the protagonist of a car chase-down? This is your chance. In Smashy Roads: Wanted, you are going to run away from cops, swat teams, and the army. And in the meanwhile, you are going to smash here and there. Do you think you can last long enough?

We are no stranger to this game idea. Many of us have played such games on different platforms. Smashy managed to jump those last 17 steps and landed in the top ten list for gaming apps.

As you can see, the app started to move above by leaps and bounds, specifically after July 25th.

If you want to cheat a little, you can always use our biggest movers tool to find the best mobile game ideas. Plus, you will save a lot of precious time.

And one last piece of advice: Don’t forget to check out the ratings and reviews section. You can find tons of new mobile game ideas by analyzing people’s demands and reactions.

We hope this article gave you some ideas about where to look and how to find new game ideas.  Now, you can sign up for free and start discovering the best ideas for yourself!