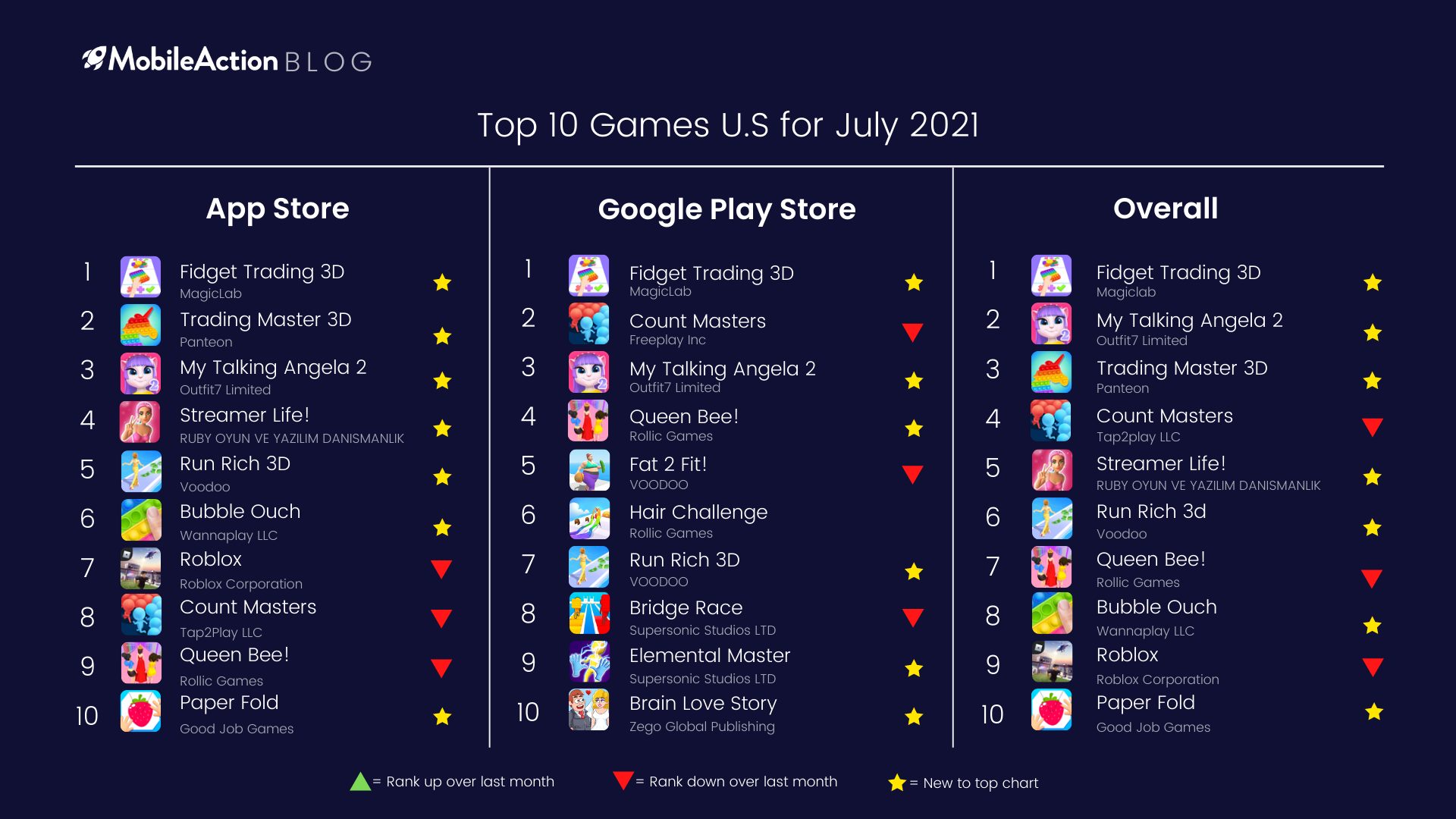 Did you know that one out of every three downloads comes from the games category? A pretty crazy statistic, right? However, the cutthroat competition for app user acquisition in this category is even crazier.

There are millions of games, and every single one of them is striving for the Top 10. That is why if we want to improve our rankings in the top charts, we should show extreme care to our user acquisition strategies.

Only three games from the previous month made it into the top charts for July 2021, and all three of them have fallen a few rankings. This once more proves how intense the competition is amongst the most popular game apps

In order to ease your job in this fierce niche, we will discuss how to advertise our app for a flourishing app marketing campaign.

We are starting our discussion with the king of June and number four of July. Count Masters is one of the rare examples of this achievement. Placing yourself amongst the most popular game apps is hard, but staying at the top might be even harder.

As you can see, from their launch to now there are merely 20-25 days that they weren’t at the top. So what are they doing to be as dominant as this? Let’s have a look.

They are organically ranking in the top 10 for almost 600 keywords since their launch. Their visibility score of 89 also supports the notion that they have a pretty solid App Store Optimization strategy. Of course, relevancy and search score also play a role in their download rates.

As seen, they are ranking at least in the top 5 for these related keywords. It is pretty impressive to rank at fifth place for keywords such as “games for free” or “racing games no wifi”. Since these searches were made by indecisive people who don’t have a specific game in mind. That is why if your app can make in the top 5 for these kinds of keywords, you can gain some lucrative users.

Being active on Apple Search Ads is also an effective method of mobile app user acquisition. As our Search Ads Intelligence shows, Count Masters, having pretty high visibility scores for both App stores and Search Ads, continues to run ads in 4 countries. They are bidding on more than 5000 keywords in the United States, which boosts their app visibility significantly.

So, keep showing up and keep attracting new users.

Lastly, we have to talk about the importance of popular and user intent keywords. Ranking in the top results for keywords with high search scores will dramatically increase our ASO rankings.

As you can see in the following, Count Masters is organically ranking third for the keywords “games” and “free games”, giving them a pretty high app visibility.

Here we see the magical touch of Apple Search Ads. Count Masters is getting %70 of the impressions for the keyword “no wifi games”, even though they are not organically ranking for this keyword. As this keyword has a search score of 67% it is safe to assume that they are getting a solid amount of impressions.

We, too, should not focus only on one side but instead, we should combine ASO and AppleSearch Ads to get maximum growth.

My Talking Angela 2 made a big jump and landed on the number two spot for July. Now let’s take a look at their app user acquisition strategy.

When we look at their category rankings, it looks like they were on point for market strategy even from the beginning, doesn’t it? We see a continuous uprise until the top and when they got there, they managed to maintain their rankings. But how?

I guess we can all agree that these keywords are pretty relevant. They are using long-tail keywords that are as specific as they can. For instance, “7-year-old girl games”. We have age, gender, and type of the game all in one. Meaning that we will get a high conversion rate since users who search these kinds of keywords know exactly what they are looking for. They just don’t know which app to download.

The Importance of Creative Sets and Localization

At this point, your creative sets, ratings, and reviews should step in. Because, as mentioned above, users have a specific type of app and they just want to be convinced. So, use your screenshots in the best way possible.

My Talking Angela 2 has a colorful set of screenshots that expresses the features of the game. You can take her to different places, apply different styles, do make-ups, etc. And, their overall review rating is above 4.5. Pretty convincing, right?

Moreover, as we can see through our Ad Intelligence tool, My Talking Angela 2 also translates its creative sets to have a better chance with local users.

As you can see, their localization process does not end with ad creatives. They are also applying the same care to their product page. By doing so, they are increasing their conversion rates as well as their local rankings. Why not do the same?

We took a look at two of the top ten apps for July. Now, let’s highlight the important lessons we can deduct from this month’s top ten list.

Both Count Master and My Talking Angela 2 have pretty high visibility scores thanks to their App Store Optimization strategy. And the most important thing is that they are visible to the right audience. Their effort to make this achievement possible returns with high download rates. Plus, utilizing Apple Search Ads compliments their marketing strategy in the best way.

My Talking Angela 2 also uses ad creatives which they distribute through mobile ad networks to acquire new users. All in all, when building your own app user acquisition strategy, do not skip out on conducting app competitor analysis. By keeping the pulse of the app market, you will be closer to developing your own chart-topping mobile game.

Therefore, if you have a brilliant game idea, you should definitely take a leaf out of these two’s marketing books. For mobile game ideas and ASO tips, you can always check our blog or you can schedule a demo with our experts right now to start growing your business!

How to Design a Killer Ad Creative for a…