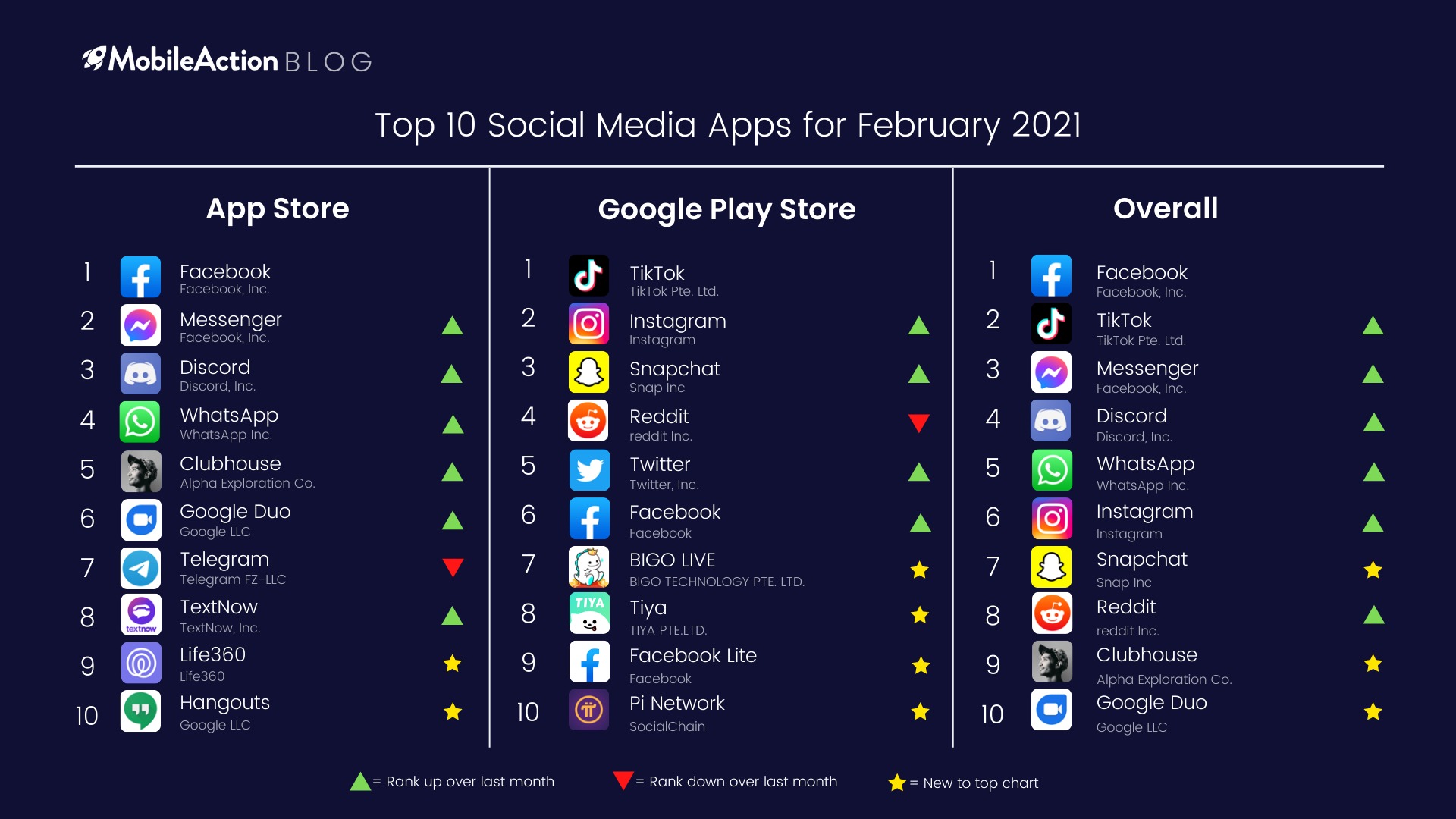 Being locked in their houses for more than a year, people are spending more and more time on social media apps. Some apps have been more successful than others during this period in terms of app marketing. In this post, we will take a look at the top 10 social media apps in the US.

Successful apps can provide valuable insights regarding mobile app marketing and user acquisition. We will be taking a look at both app store optimization and paid growth strategies of some of these apps. If you are thinking about how to promote your app, hopefully, this post will help you.

As with every category, some apps usually dominate the Top Charts for social media apps. For example, Tinder usually takes first place amongst top dating apps. For social networking apps, it is safe to say that TikTok and Facebook are usually ranking at the top. As you can see in the Category Rankings, even though TikTok is always close to the top, Facebook appears to be holding the first spot.

Cryptocurrencies have been one of the hottest topics of last year. In one of our recent posts, we discussed how bitcoin prices affected the mobile app marketing industry. Pi Network allows users to mine Pi, a cryptocurrency that is not actively traded at the time being. The developers claim that their aim is to reach 100 million users. It is not possible to know whether or not this currency will reward its investors. However, there is already a rather sizable community.

As you can see, the app was already ranking around 20 in the social networking category. Since the new year, their overall rankings have been also increasing significantly.

Through ASO Intelligence, we can take a closer look at their app store keyword optimization efforts.

In order to appear closer to the top in the app store search results, apps need to increase their visibility. This is mostly done through keyword optimization. We can see that Pi Network has a Visibility Score of 69, ranking on a total of 480 keywords. However, the app is generally not ranking high for those keywords as can be seen through the Ranking Distribution Bars.

This might also be due to the fact that only users who are referred by other users can join the community. This limits the number of users the app can get from generic searches. Check out our app store optimization guide for a more detailed explanation of the topic.

Another new app in the top 10 social media apps charts is Life360: Find Family & Friends. This app allows users to track their loved ones, as well as providing emergency alert services. It seems that the app is mostly used by parents to track children as well as by romantic partners.

We frequently discuss the fact that a solid ASO strategy and an Apple Search Ads campaign are complementary tools. When building up a user acquisition strategy for apps, app marketers should pay attention to both aspects if they want to run an effective campaign. Life360 seems to be a good example of this issue.

With the Search Ads Intelligence tool, we can discover the keywords a given app is running ads for. It is clear that Life360 is bidding on tracking related keywords. On the right-hand side, you can also view the organic rankings of the app for the chosen keyword. For the keyword “track”, the app is getting 72.5 percent of the total impressions. As Apple Search Ads is gaining its place among the top mobile ad networks and increasing its popularity every day, the competition in the platform will most likely increase.

Notice that Life360 is also ranking rather high organically for the keywords that they are bidding on, which is definitely a good practice. App store optimization tools come in handy when trying to find app store keywords – both for bidding on them and using them in your metadata.

Bidding on 6002 keywords in over 14 countries, Life360 is definitely taking advantage of Apple Search Ads. As indicated by the Visibility Scores, we can once again see that the app is paying attention to both ASO and ASA. Additionally, conducting app localization can help apps to increase their rankings in different regions.

Looking at their app reviews, it is clear that the app is enjoyed by many users. However, the average rating is around 3.11, mostly due to people who are concerned about their privacy (or teenagers who do not want their parents to track them).

If you enjoyed our review and would like to draw your own insights, sign up for free today and start growing your app!