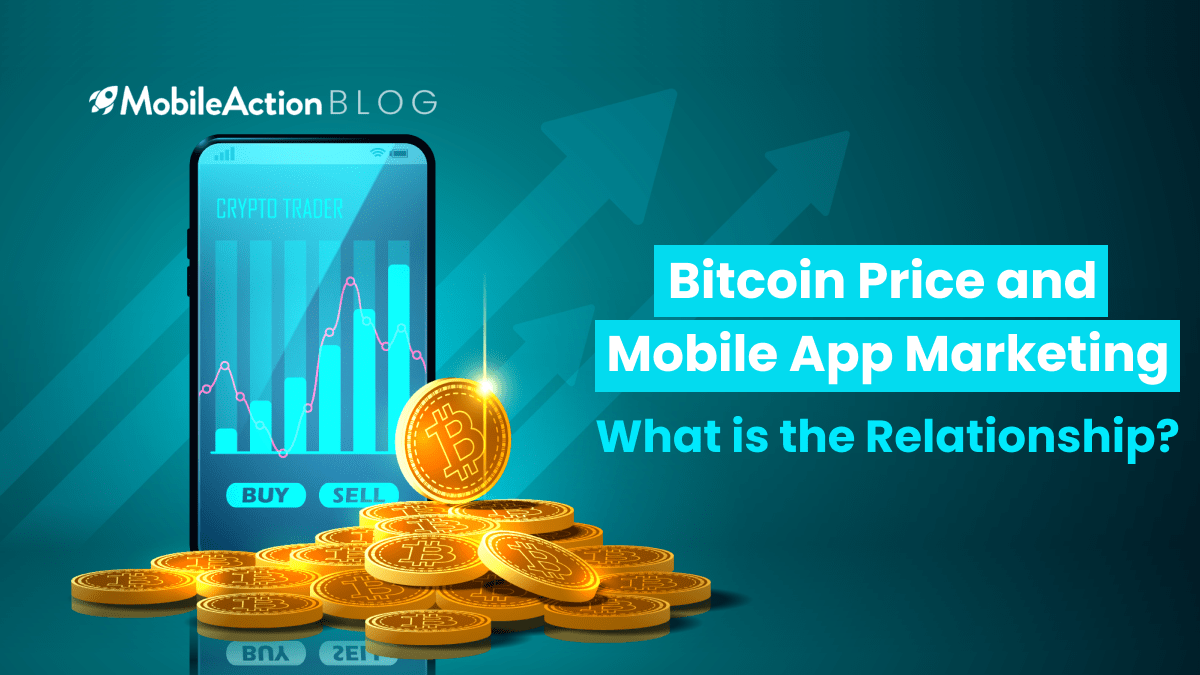 Once upon a time, Bitcoin was thought to be just another internet fad, some even thought it was a scam. Today, Bitcoin is thought to be the gold of the future. The young, the old, the poor, and the rich, everyone seems to be interested in taking a piece of the action. Bitcoin has also impacted the mobile app marketing strategies used by the top finance apps.

Reflecting everything and anything that is going on in the world, the Mobile App Industry is indeed involved in the Bitcoin mania. With the increase in the price of Bitcoin, there has also been an increase in the number and variety of mobile advertisements used by Bitcoin trading apps. These trading apps became more aggressive in their paid growth strategies as the number of people who wanted to trade Bitcoin increased significantly.

We wanted to explore whether or not our data would support such a relationship between the price of Bitcoin and the number of creatives used by finance apps. Specifically, cryptocurrency trading apps. Let’s take a look at the data from the App Store as well as the Play Store and decide whether or not a correlation exists.

First of all, let us explain which data we chose and why we chose it. As we will be comparing our data to the price of Bitcoin, we focused on apps that allow users to buy, sell or store Bitcoin. Our data range was set as January 2020 – February 2021. For every month in this range, we identified 20 cryptocurrency trading apps according to the number of creatives they use. Hence, the top 20 advertisers for each month were considered.

Such an approach fulfilled two purposes. First of all, the number of creatives used by the top 20 advertisers for that month is a good indicator of competition in the category. Additionally, not every app uses a paid growth strategy. By excluding apps with relatively low numbers of creatives, we were able to more accurately identify changes over time.

So how exactly did we get this data? With a little bit of Ad Intelligence magic of course. Our Top Advertisers tool allows us to get a view of the most aggressive advertisers for a given period. Additionally, thanks to advanced filtering, we can tailor the data which will be displayed.

For our article, we chose three filtering options. By specifying an app keyword, you are able to see advertisers who rank for that keyword. Bitcoin was used as the keyword for which we wanted to see the advertisers. Additionally, we also searched for apps that included the words “crypto” or “trading” in their app name to broaden our results. Using the “or” rule, apps fitting any of these criteria were included in our list.

After specifying on the app level, we also sorted our results by app store and date. Finally, the top 20 advertisers for that month were chosen according to their unique creative count. Below, you can see an example of the output for January 2021 after our filtering.

Now that we explained our procedure, here comes the results. The Bitcoin prices used in our graph were the closing prices of the last day for each month in our time interval.

In the first month of 2020, we can see that the value of Bitcoin was around $10,000. In the same period, the number of unique creatives for the top 20 advertisers in the category was around 850. After a year of extreme valuation, Bitcoin reached nearly $50,000 in price while the number of unique creatives increased more than tenfold, reaching 12,000.

Our app market analysis once again proves the dynamic nature of the mobile marketing environment. If you want to boost app download, it is of critical importance for you to pay attention to the current events. Due to increased revenue potential, the competitiveness in the category resulted in more and more aggressive advertising strategies. Now that we established there was a significant increase in the number of creatives, let’s take a look at some of them in order to get a better understanding of the category.

Creative Analysis for the App Store

There are certain selling points that can be used by Bitcoin trading apps. Obviously, stating the increase in Bitcoin price is a great way to capture attention. Additionally, low commissions and investment safety also seem to be frequently used. Using the Top Creatives tool, we can inspect the creatives which fit our search criteria.

Here, we selected the creatives which were active in January 2021. We narrowed our search to the App Store and the United States. Finally, we searched for apps that had either “bitcoin” or “cryptocurrency” in their app name.

This tool is invaluable for anyone who runs a paid campaign. By subscribing to the segment you created, “ios bitcoin” in our case, you can get notified when new creatives are published which fit your search criteria. Now let us take a look at some of the current creatives in the Bitcoin world.

Here, we can see a creative from Coinbase, a popular cryptocurrency trading app. Emphasizing that Bitcoin prices are moving, they are inducing the fear of missing out. Considering the general population’s interest in buying Bitcoin, even a single creative can be the deciding factor.

Crypto.com is yet another popular trading app with an aggressive advertising strategy. In their ad, you can see that they also mention the all-time high price of Bitcoin. Additionally, they also use the phrase “true cost”, which refers to the lack of transaction fees.

For many people, cryptocurrencies are a mystery. The functioning mechanisms are complex, and it can be hard to comprehend how the entire system works. This may cause people to stay away from trading Bitcoin even though they want to.

By making the trading process easier, these apps can increase their user bases even more. eTORO is one of the major cryptocurrency trading apps and in their creatives, they reach out to the common man in order to draw them to the action.

If you would like to see the power of our ad intelligence data, schedule a demo now!

In the App Store, there was a significant relationship between the price of Bitcoin and the number of unique creatives published by trading apps. Now let’s take a look at the Google Play Store to see if there is a similar connection.

It is clear that the increase in Bitcoin price had an impact on the Google Play Store as well. The top 20 cryptocurrency trading apps in January 2020 had a total of approximately 2,500 unique creatives. At this time around, Bitcoin was around $10,000. During the year, the number of unique creatives increased at a faster rate than the price of Bitcoin.

At the end of the year, the number of creatives in the Google Play Store more than tripled, reaching around 8,000. Just as in the App Store, it seems that developers increased their paid growth efforts throughout the year, matching the hype surrounding Bitcoin.

Using the same filtering procedure described above, let’s take a look at the Bitcoin creatives used in the Play Store through our Top Creatives tool.

We selected the creatives which were active in January 2021. We specified our search to the Google Play Store and the United States. Finally, we chose apps that had either “bitcoin” or “cryptocurrency” in their app name.

Luno is a cryptocurrency trading app that pursues paid growth strategies, especially in the Play Store. Their creatives seem to be targeting a very large audience. They seem to emphasize the ease of buying and selling Bitcoin in their creatives. This way they can capture the attention of users who want to buy Bitcoin but stay away because they think it’s overly complicated.

Not everyone has thousands of dollars to invest in Bitcoin, nor they want to. By inviting even the smallest investors, these apps can increase their revenue. Thus, Luno apparently allows users to invest with as little as £1.

YouHodler is an app that allows users to store their Bitcoin and use it as collateral to get loans. The app advertises both in the App Store and the Play Store. Their ad creative jumps straight to the point, showering our eyes with money and bitcoins.

Another popular crypto wallet app is Crypterium. This video creative published by them basically sums up every selling point we have discussed so far.

As far as we can tell, cryptocurrency mania will not end anytime soon. With new types of cryptocurrencies being introduced every day, the competition amongst the apps will surely keep increasing.

This article hopefully demonstrated the dynamics of the mobile app marketing industry and how reactive it is to current events. When strategizing about ways to advertise your app, you should always keep in mind recent trends, habits and much more to reach maximum efficiency.

Time will show whether or not this increase in competition in the mobile app market will keep up with crypto prices. The only certainty is that you need the right tools to run effective advertising campaigns. MobileAction provides the best Ad Intelligence tool there is, so you do not have to spend any more time thinking about how to promote your app.

Schedule a demo call today and see for yourself what you can do with an unrivaled amount of ad intelligence data!

Best Social Networking Apps to Keep an Eye On…