Blog Top Advertising Apps of May 2021

Top Advertising Apps of May 2021 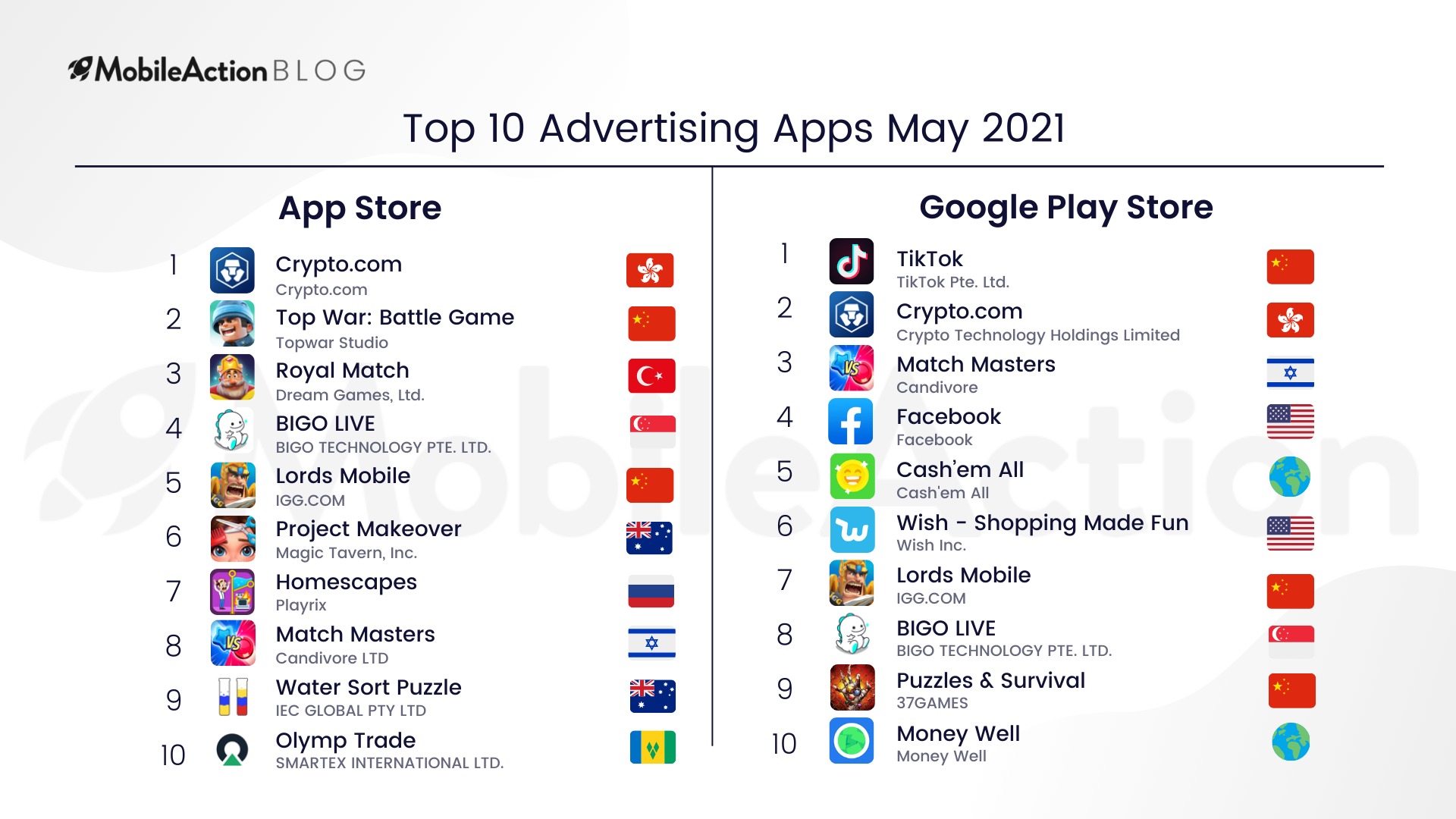 Paid growth strategies can be extremely effective for growing your app and increasing popularity. Some apps are more aggressive than others in terms of advertising, thus making it to MobileAction’s top advertising apps charts at the end of every month. This list is created by the Mobile Ad Intelligence tool, which allows us to locate advertisers in the app stores.

If you would like to add paid mobile user acquisition methods to your app marketing strategy, keeping a close eye on the apps that are leading the stores can be helpful. Crypto.com is the leading top advertiser in the App Store while in the Play Store TikTok is ranking first. Bigo Live and Match Masters apps are on the top advertising apps lists for both stores. Now let’s take a closer look at these top advertising apps’ strategies and see if we can gather interesting insights.

If you have been keeping up with the app stores, you might have noticed that apps which offer real life rewards such as cash or coupons in exchange for the completion of in-app tasks are really getting popular. Cash’em All can be considered the leader of this genre of apps as it is pretty popular.

We see that this game is always ranking near the top in the Lifestyle category. Many people are sceptical about this kind of apps, thinking that they might be scams.

Butwe take a look at the reviews of Cash’em All, we can seethat the user base seems to be satisfied with the app.

Cash’em All has an average rating of 4.11. Through the Most Mentioned Keyword Analysis, we can see that keywords such as ‘legit’ and ‘payout’ are associated with positive reviews, most likely increasing the conversion rates.

When it comes to creative strategy, Cash’em All seems to keep the number of creatives on the lower end compared to other advertisers in the Lifestyle category.

This is most likely due to Cash’em All’s global advertising strategy. Rather than focusing on creating different creatives with different content, Cash’em All seems to mostly focus on localizing their creatives. As you can see above, they have ads in over 11 languages all around the world. This way they can reach more people in their native languages, increasing the likelihood of converting them into users.

As you can see, they use the same content and distribute in local languages all around the world.

Another popular trend in the advertising world is using real life imagery in creatives. Some of Cash’em All’s creatives with the most impressions are in this category as well. Cash’em All seems to differentiate itself from similar apps by emphasizing their payouts and legitimate status.

In order to reach the top 10 mobile games list, gaming apps usually advertise themselves through different channels to reach the maximum number of users.

Water Sort Puzzle is actively working on App Store Optimization, Apple Search Ads and mobile ad networks at the same time, resulting in a comprehensive app marketing strategy. For Apple Search Ads, the app is currently only active in the US, where they are bidding on nearly 4 thousand keywords.

In the top advertising apps charts, Water Sort Puzzle is 9th in the App Store.

The amount of testing in Water Sort Puzzle’s creatives is easily visible. This app creates different versions of the same creative and tests them over and over again, locating the effective ones.

One element that they are testing seems to be the background. They try the sea and the sky as their creative backgrounds.

They also seem to be experimenting with their text.

As you can see they are using different subtitles such as ‘Tap To Pour’, ‘Test Your IQ’ and ‘Solve The Puzzle’.

Shopping apps have been increasing their popularity since the pandemic. Wish and SHEIN have been the leaders of the category for quite some time. The first that captures our attention in Wish’s advertising strategy is their utilization of mobile ad networks.

Interestingly, even though Wish is using Facebook more, they seem to be getting more impressions from AdMob.

Another factor that helped Wish to reach the top advertising apps charts is the incredible number of creatives published.

Wish has published nearly 44 thousand creatives during May 2021 while this number is around 15 thousand for SHEIN, which is also ranking much lower in the top advertising apps list.

When we look at their creatives, there is an overwhelming amount of creatives that directly include different items. Most probably for delivering personalized content to relevant users, helping them to attract more customers.

If you would like to use Mobile Ad Intelligence to enhance your app marketing strategy, schedule a demo with our experts today, and use our intuitive tools to reach success!

How to Design a Killer Ad Creative for a…

Health and Fitness Apps Top Advertisers for May 2021