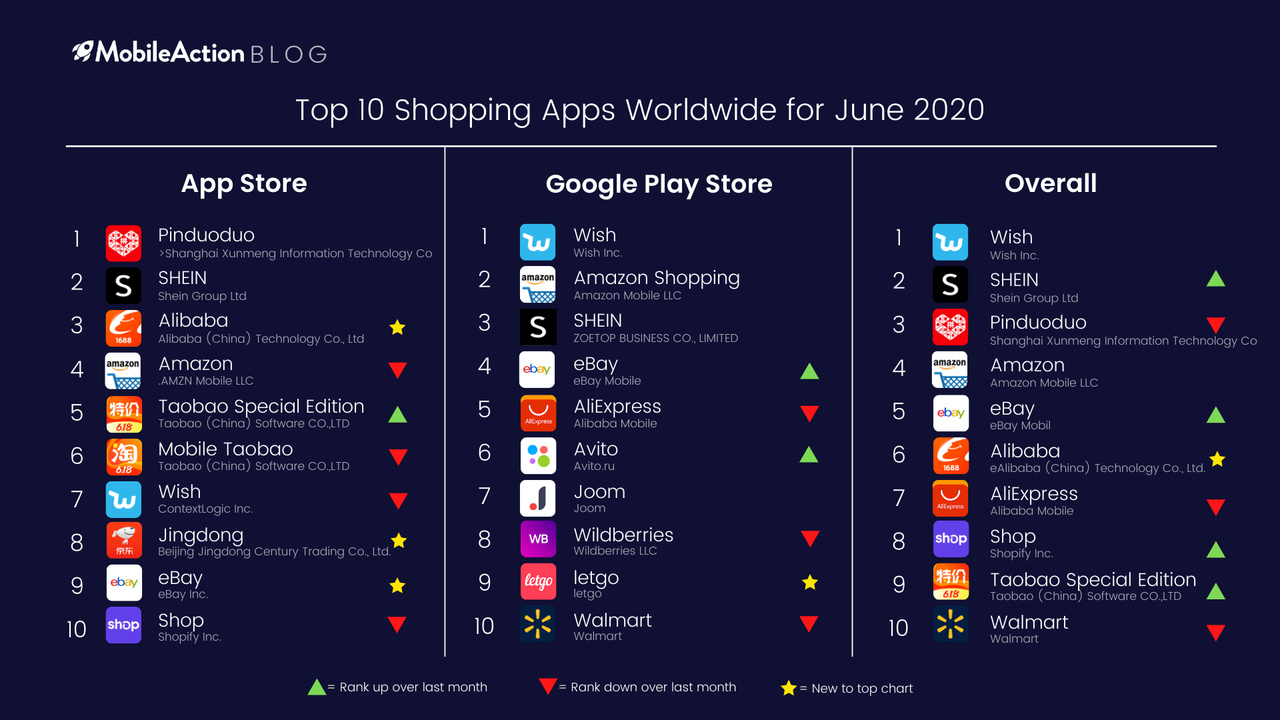 The above chart shows the Top 10 Shopping Apps Worldwide in June 2020 for the App Store, Google Play Store, and both stores combined. Wish was the most downloaded app in Google Play Store and in Overall with nearly 12 million downloads. Following Wish are SHEIN and Pinduoduo.

Saying that shopping is at the center of the world economy would be a true statement. Up until the early 2000s shopping was done face to face. However with the developments on the internet, its security and improvements in technology, we can now do our shopping online, whenever & wherever we want.

In the past couple of years especially, besides the local online shopping sites and apps, international ones seem to be favored. This is thanks to the variety of products they offer and international shipping. As we see in the list above too, most of the apps consist of big companies that operate on an international scale. In such a competitive category as shopping, it is of course hard for local businesses to catch up with those who choose to be international. And, of course, the companies above are implementing certain strategies to get their spots.

One of the apps that caught our attention this month is Joom. Joom was new to the top 10 list in May and it managed to stay at its spot for the remainder of June as well. At first glance, it seems similar to AliExpress in its concept, which is a giant in the shopping category. Joom is number 7 over on Google Play Store, while AliExpress is number 5.

And when we looked at their Category rankings we saw that Joom caught up to AliExpress pretty fast. It seems to have gone up linearly.

Surely, Joom must be implementing some kind of strategy to be able to compete with such a giant.

Let’s first take a look at the Visibility Map from our Visibility Report tool from our ASO Intelligence to get an idea of their visibility throughout the world. All the data following will be for Google Play Store, as that’s where both of the apps are competing with each other.

Here, the darker the color, the higher the visibility score is for a given country. The map above is for Google Play Store. AliExpress seems to be the overall winner. However, we see a clear dominance of Joom in Russia, Ukraine, Kazakhstan, Romania, Hungary, Austria, and Germany. In Russia, Joom has a visibility score of 88.2, which is very high. And despite being a giant, AliExpress seems to have lost its hand to Joom in Russia. Could Joom’s paid efforts be the reason for this? Or maybe AliExpress’s lack thereof.

Let’s go over to their Campaign Analysis and find out together.

Campaign Analysis of Joom and AliExpress

Right off the bat, we see that AliExpress is 560th in Overall Advertising, whereas Joom is 230th, way above the giant AliExpress. We also noticed that Joom has an incomparable number of Ad publisher and Creative count next to AliExpress. Let’s take a look at which countries these apps focused on with their in-app advertising.

We see that AliExpress actually focused heavily on Russia with its in-app advertising. Out of its total 652 creatives, it got 40.6% of its impression from Russia. But it still couldn’t beat Joom, who got only about 9.7% impressions of its total creatives from Russia. But keep in mind that Joom is very aggressive with its in-app ads compared to AliExpress. So a smaller percentage like this still goes a long way.

This just goes to show that, giant or not, in-app advertising can go along way and it is a very effective strategy.

We hope you enjoyed our blog post about Top 10 Shopping Apps for May 2020.