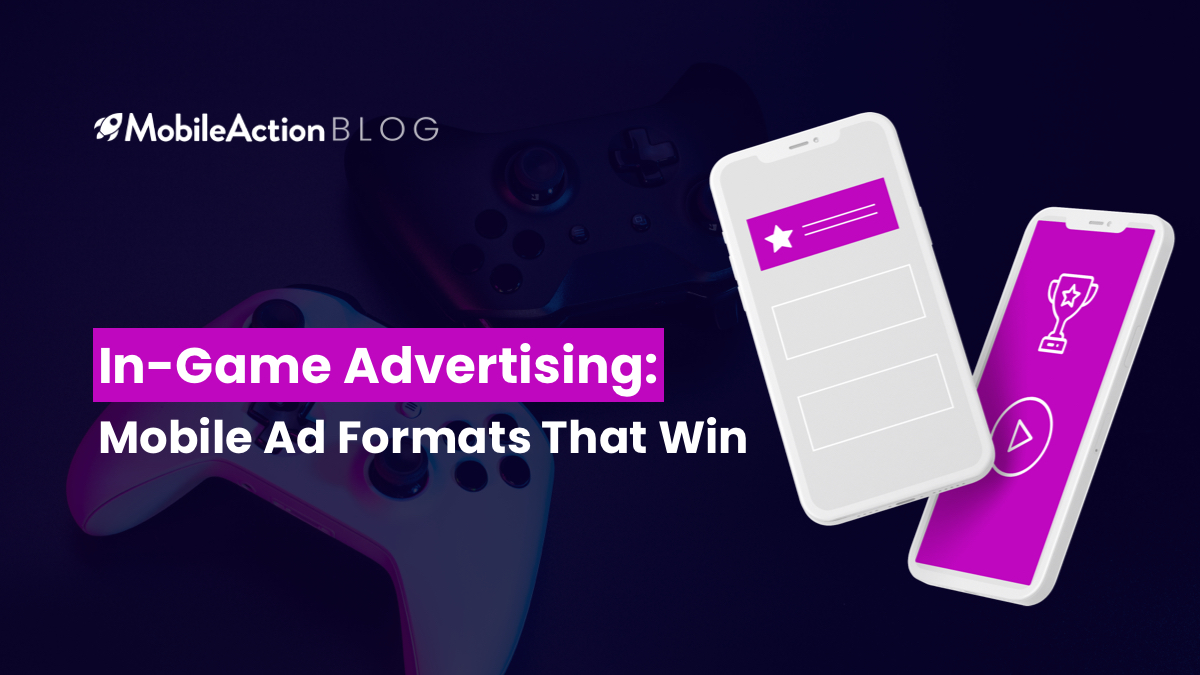 Trends continuously, change in the App Store. These include keywords, game types, and even the kind of ads that are used for in-game advertising. As many mobile games depend on in-app monetization to generate revenue, understanding the types of different creatives and when to publish them can be important for your strategy.

MobileAction’s Ad Intelligence tool allows us to draw insights from different trends in the app stores. For example, what kinds of creatives are apps using to promote themselves? Which of these creatives should you publish in your app in order to maximize your revenue? Such information is accessible through our dashboard, allowing you to fine-tune your ad publishing strategy.

Now let’s take a look at some of the mobile ad formats and how you can leverage them to grow your business.

These types of creatives cover the entire screen. Usually, they can be skipped by the user after a certain amount of time. Because the entire screen is dedicated to one ad, it should be effective in capturing the users’ attention. However, there are some considerations to be made.

Interstitial ads can include different types of content. From left to right, we can see playable, image, and video interstitial ads.

Just because the entire screen is displaying a video does not mean that the user will necessarily pay attention to it, or even look at it. However, if you can get users to interact with your ad such as providing a demo of your game, the chances of your product being remembered can increase. The Top Creatives tool allows us to see millions of different creatives from the app store. Let’s take a look at some relevant examples.

While waiting for my game to continue, I can interact with this ad and pass some time. Especially if the game is interesting, this might lead me to the product page.

Additionally, the timing of interstitial ads is also very important. If you do not have any active users left because of your publishing strategies, you won’t be able to increase your revenue. That is why a balance should be established between publishing ads and user experience.

If ads suddenly cut in, the user experience will be harmed. You should place ads in natural ways so it does not interrupt the flow. After completing an objective or dying in a game, there is always a gap until the user starts playing again. Publishing ads at such intervals can be useful for increasing impressions while also maintaining an optimal user experience.

Rewarded ads are very efficient for ad publishers. They are also probably the least hated type of ad from a user’s perspective. In-game advertising consists of three parties. The publisher, the advertiser, and the user. Rewarded apps are perhaps the closest you can get to a win-win-win situation.

The basic premise is that the user gets a reward for watching an ad. This reward can be an in-game currency, extra lives, or anything else that is related to the game. Thus the user is actually to watch the ad. This causes higher completion and less harm to the user experience compared to other formats.

Rewarded ads are very efficient for ad publishers. They are also probably the least hated type of ad from a user’s perspective. In-game advertising consists of three parties. The publisher, the advertiser, and the user. Rewarded apps are perhaps the closest you can get to a win-win-win situation.

The basic premise is that the user gets a reward for watching an ad. This reward can be an in-game currency, extra lives, or anything else that is related to the game. Thus the user is actually to watch the ad. This causes higher completion and less harm to the user experience compared to other formats.

Playable ads are also becoming increasingly popular. As you can guess, these ads allow users to play. It is advantageous as users get to try new games without installing them while also getting an overall sense of the user experience. Compared to intrusive and spammy ads, they are less likely to harm the user experience.

As you can see, this ad allows me to get a brief overview of the game Kick the Buddy: Forever. It is certainly more enjoyable than looking at a still image for 20 seconds. It also provides high-quality impressions for advertisers as people installing the game after viewing such ads will be more likely to play it.

Playables normally have similar flows. First of all, the instructions are provided. These are not very extensive instructions, even just a cursor moving around the interface is sufficient sometimes. After this brief introduction, the user is allowed to play the game for a short duration, usually around 10 to 15 seconds. Finally, a still image cuts in (usually containing a Call-to-Action) and the user is prompted to install the game. This format has amazing potential for in-game monetization.

Banners are simpler forms of advertising. They are usually placed in the corners or the bottom of the page and are more subtle compared to the previous formats. However, being discrete might not be an effective method for in-game advertising.

How much the users pay attention to these kinds of ads is open for discussion. Some people might be ignoring them altogether. However, they are simpler to produce, creating an advantage for advertisers. Banners can include visuals as well as plain text.

Being less effective than playable or rewarded ads, banners can be used as a complementary format. If they do not harm user experience, they can come in handy in terms of supplementing other formats that are more efficient.

Small details can make or break your revenue generation. Even the format of ads you are publishing in your app can increase or decrease your income. In this article, we discussed four main formats of ads that game developers can publish in their game to increase their revenue.

Rewarded apps seem to be the most user-friendly format while also benefiting both the publisher and the advertiser.  Interstitial and playable ads also succeed in capturing the users’ attention. The more interactive an ad gets, the higher chances that the user will be engaged, increasing the likelihood of install. Finally, we discussed banners that seem to be getting less relevant for in-game advertising.

The Ad Intelligence tool allows you to draw your insights from market trends as well as competitors’ apps. If you want to learn more about using MobileAction for boosting your growth, schedule a free demo with our experts today!

How to Create Better Games with Ad Intelligence

Which Apps Benefited Most from the COVID19 Pandemic