Blog App-ily Ever After: Valentine's Marketing

App-ily Ever After: Valentine’s Marketing 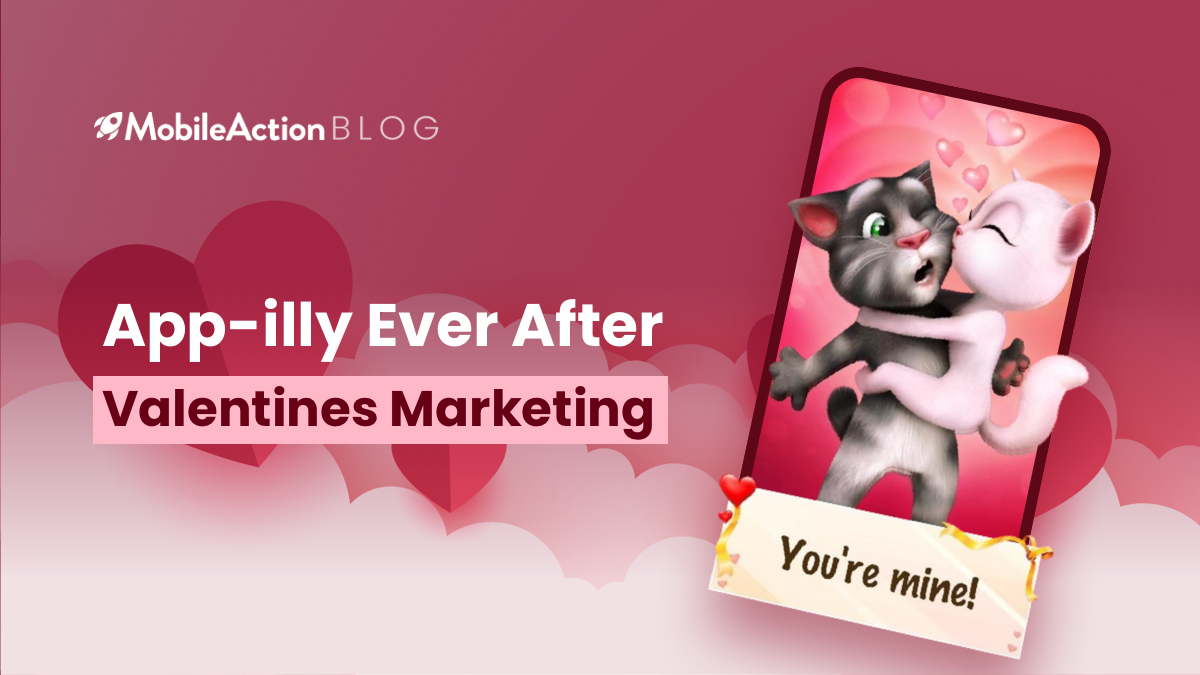 Love is in the air! Valentine’s Day is a time to show those dearest to you just how much you love them, and it is also an opportunity to market your apps! A seasonal marketing strategy is a great way for you to engage your users. Showing your users some love can help you increase your ROI.

Let’s see which types of apps have been struck with Cupid’s arrow, and find out what creative strategies and app store optimization best practices they are using to show their users that their apps have a crush on them too.

Couples aren’t your only target demographic! Seasonal marketing is popular with photo editing apps, games, and other such casual entertainment apps. Many people use the holiday as an opportunity to show their loved ones they care. So what are the app store optimization best practices for this seasonal holiday?

We can see that Hinge had a huge spike in downloads last Valentine’s day. They ran a campaign at the time featuring videos of a plush version of the app icon being destroyed and their slogan “the app made to be deleted”.

However, as of right now we do not see a spike happening in Hinge’s downloads.

When we use our app store optimization keyword tool to check the popular keywords for these apps, there are none directly referencing Valentine’s day. There are, however, search terms like “date” or “find a date” things like that. But they are not particularly high scoring nor are they specific to Valentine’s day.

Valentine’s day isn’t particularly marketed as a day to find new relationships, but rather a day to celebrate existing relationships.

Unless, however, you are in grade school. Keep in mind that for a little later on. As far as dating apps are concerned, except for Hinge’s campaign last year, The holiday barely creates a stir, strange as it may seem.

Last-minute Valentine’s day purchases are common. Though many people may consider the holiday important, people may wait until the last minute. “Gifts for boyfriend” or “Gifts for girlfriends” may seem like good words to include in your ASO strategy. However, these terms are more often used on a search engine. The app store may have keywords like “fast shipping” “24 hour” or “gift card” might attract more people when it comes to the App Store.

Other search engines are most likely where people are getting their ideas, and the App Store is where they turn to make these purchases.

Seasonal marketing often comes down to advertisements suiting the event, so this is a good idea for shoppers. However, with only a few special exceptions, the creatives for the shopping apps rarely use the word “Valentine’s Day”. Etsy has creatives mentioning Valentine’s day and a few companies have creatives pointing towards the visual coding of the day (hearts, love, intimates, so on.) But out of the top 30 shopping apps in the US, only Etsy has the term in its creatives.

Walmart ran a cheeky ad for Men’s underwear, which is probably better left up to the imagination.

Pet stores have taken a more subtle route. This Pet shop app is showing ads for packages you need when getting a new pet. They have the slogan “Love at First Paw” and feature couples with their new animal.

This more subtle style of marketing seems to be the approach taken surrounding Valentine’s day.

Amazon has promotional material for Chinese New Year but has yet to publish Valentine’s day creatives.

The more popular shopping apps don’t even see a blip on February 14th. This points to the idea that these stores are not the place that the majority of people are getting their Valentine’s gifts or that at least they are picking them up in person and not on the app. If people tend towards last-minute shopping for this Holiday it would mean that they would be less likely to make a purchase on an app that would take a while to arrive.

At first glance, this looks like there have hardly been any Valentine’s Day apps since 2017 or so. When we think about how ASO works, we will realize that we are simply too early. Apps for photo editing and other apps themed around seasonal marketing will often change their app names for whatever holiday is being celebrated.

This app from Lyrebird Studio, for example, updates its whole metadata including icon, screenshot, description, and even name for the holiday. This app got ready for the holiday on January 19th this year, but other apps may be waiting for Valentine’s day to get a little closer to rehaul their ASO. This seasonal marketing creative strategy employs ASO to the maximum extent.

Unlike Christmas for example, there is less of a slow creep surrounding Valentine’s day. Therefore the apps can update closer to the actual date of the Holiday.

Are Apps Getting the love they deserve on Valentine’s day?

« Clubhouse: How Did It Become So Popular?
Ad Strategy: Apps and Publishers Who Started 2021 Strong »

How App Store Optimization Can Help You Increase Mobile…