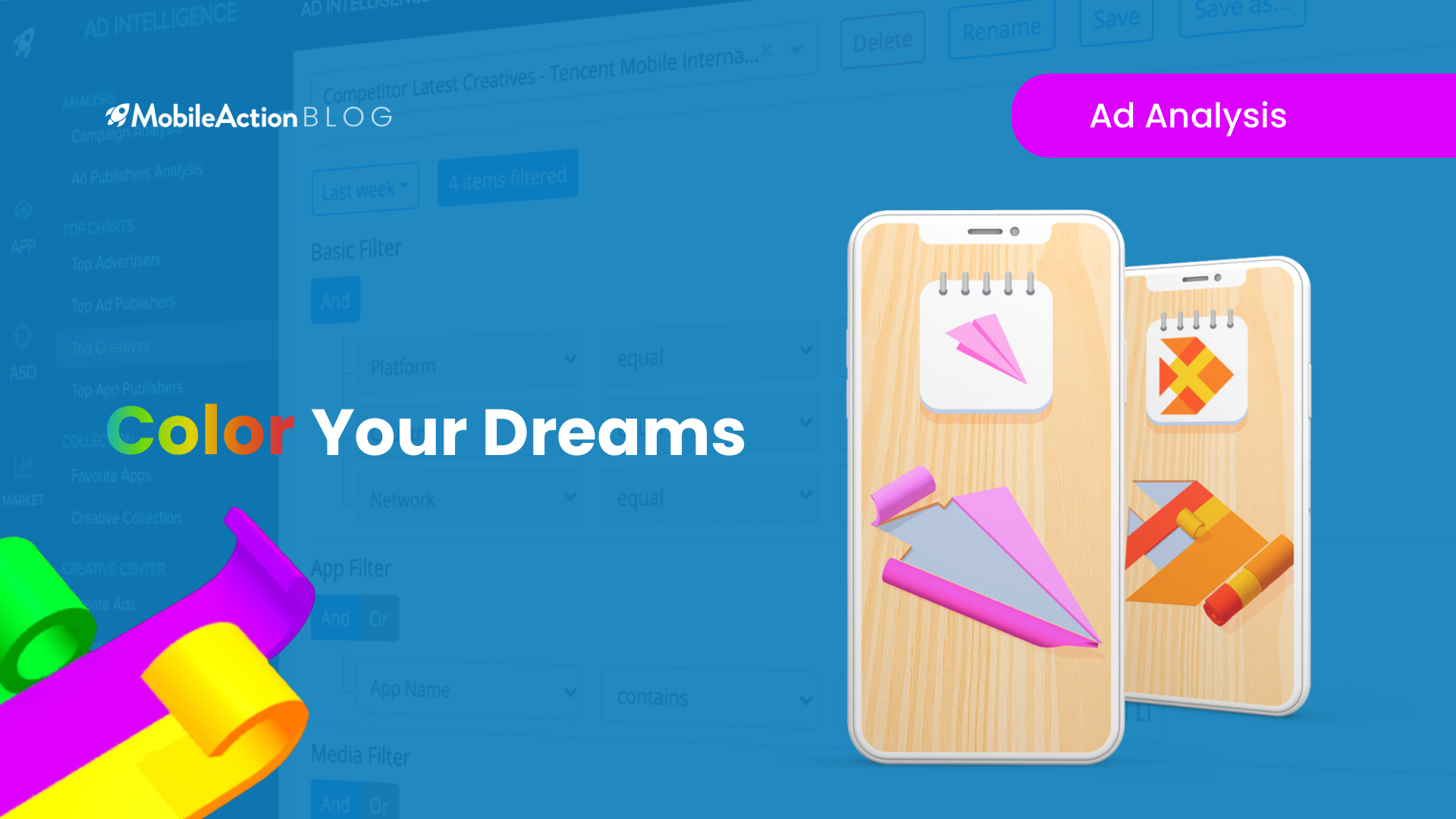 As we all got stuck at home during this Covid-19 pandemic, games are maybe the one-and-only entertainment for most of us. During the pandemic so far, we have seen different games become popular and eventually got forgotten or replaced. However, one of the categories people always come back to is hyper-casual games.

Good Job Games is one of the leading publishers when it comes to the ever-popular hyper-casual games. We’ll make a creative analysis of one of its most popular games, Color Roll 3D, to uncover their success.

Color Roll 3D has an estimation of more than 23.5m downloads overall, it ranked second place in our Top 10 Games Worldwide in September 2020 for the App Store, Google Play Store, and both stores combined.

Let’s have a more detailed look into this game, to see what kind of ad strategies Good Job Games are applying to Color Roll 3D to acquire more users compared to other games in the market.

Last month its category rankings were steady. However, they reached their best ranking on the 14th of October, ranking as 1st place in the Game Puzzle and 19th in the Overall Free categories for the App Store – USA.

On the Daily Country Ranking list, we see that Color Roll 3D had a good run and performed well. As seen on the screenshot below, their rank is 1st place in 27 countries for the Game Arcade category and in 35 countries in the Game Puzzle category.

For the last month, Color Roll 3D was one of the top apps in all countries, ranking at 2nd place for both the App Store and Google Play Store, just after the popular game Among Us!. (which everyone is obsessing about at the moment) So, keeping that in mind, we can say that they’ve been a great competition.

As we mentioned before, despite being a relatively new game company (founded in 2017), Good Job Games seems to be aiming for the top. On the Top Publishers list, for the Game category, including all countries, Good Job Games reached 3rd place on the list. That is what we call a serious accomplishment!

Now, let’s take a closer look at the specific campaign metrics of Color Roll 3D to deepen our analysis of their paid user acquisition strategy.

Campaign Analysis shows us insights such as which ad networks Color Roll 3D is using for their creatives, what kind of creatives they are using, and if they are localized or not.

As they’re 2nd in the top apps in the App Store and also Google Play Store right now, let’s take a further look into their ad strategy to understand how they’ve achieved this.

Above is a screenshot of the main campaign metrics of Color Roll 3D for iOS. This app is both “running ads” and “publishing ads” which gives it a chance to increase its visibility and share.

We can see that Color Roll 3D is active in 11 ad networks and is determined to receive downloads from in-app ads, more than the average app. A good-share is from Facebook, followed by Admob, Unity, and Mintegral, which are all taking up more than 10% each.

Its total ad publisher count is 1,667. And out of a total of 163 creatives, 105 are active. The creatives are mostly in video and image format, similar to other game apps, as videos give the users a sense of playing the game. This is important for apps like Color Roll 3D, as eye-catching details are a must. It has quite the share of playables too, at 3.7%.

The distribution share of the impression percentage received for the last month, the Ad Networks utilized, and the Countries being targeted by this app can be found below.

As we can see, Color Roll 3D is being distributed on top ad networks in many countries.  Not only is it targeting the USA, but it is active in Europe and Asia. Even though the app uses only English it is using it in 85 countries, even though it’s not localized, it is still widely used around the world.

One of the reasons why they utilize English is because hyper-casual games in nature don’t need a lot of words to describe them as they’re very straight forward in their gameplay and graphics. The game itself provides a visual context rather than a verbal one.

Let’s go over to the Top Creatives tab from our Ad Intelligence tool. We can choose to filter out by app category or even a specific app title. We did this for Color Roll 3D to take a look at its top creatives. Below you will see the top 3 based on their impression scores. We can see one playable video and two images for the App Store. And we know that playables are often preferred for game apps as it gives a feeling of real gameplay.

When you click on the individual creatives can also see the title along with its impression shares, as well as the apps the ad appears in.

What to Take Away from Color Roll 3D’s Ad Strategy

Color Roll 3D is created by Good Job Games. Which has multiple other games successful in ad strategies like Office Life 3D and House Life 3D.

All of their games have a high impression score. Ads play a huge role in keeping the score so high. To stay at the top of the charts, reach a variety of users and downloads, it is vital to keep up with trends. And to be constant with ad strategies.

We hope you enjoyed this blog post. Are you interested in seeing more about Good Job Games and other big publisher’s ad strategies? Check out our Campaign Analysis page to find insights about user acquisition strategies for any app! Or schedule a demo to let us show you guide you through insights about the in-app ads world.