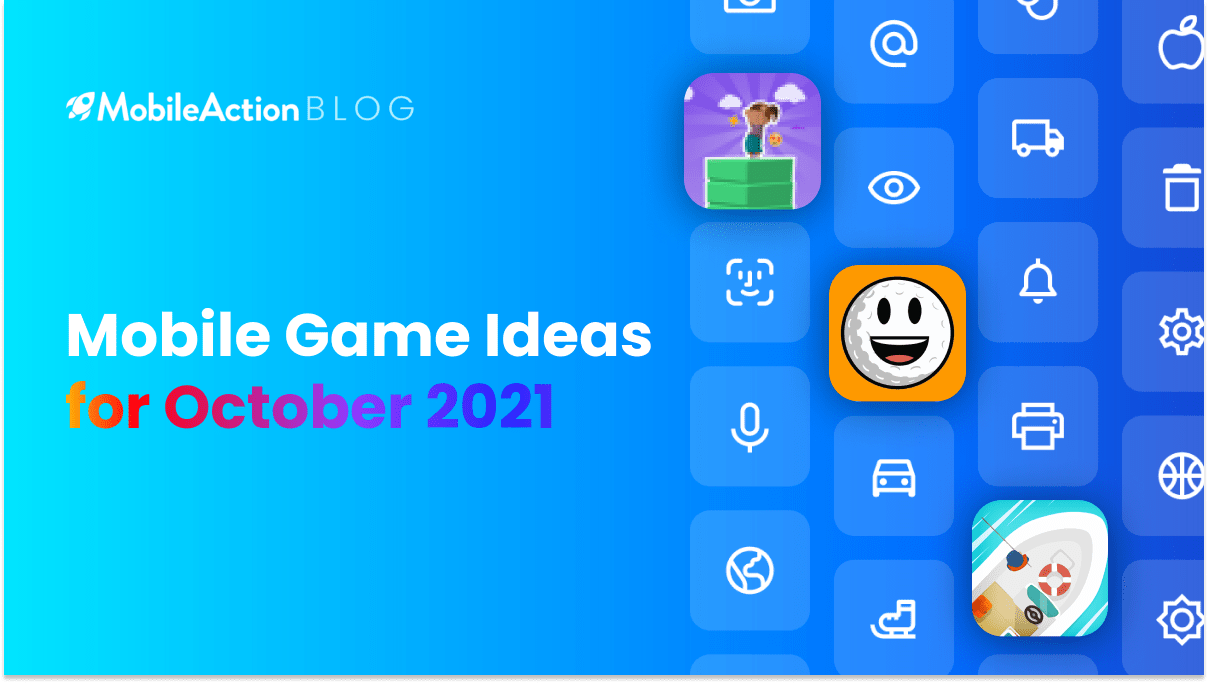 For this month’s Mobile Game ideas post, let’s start with Charles Holland Duell. He was the commissioner of the US patent office in 1899 and he is most famous for his quote:

“Everything that can be invented is already invented.”

As you would have agreed, it was an early statement, and probably it will probably never be valid. Humankind will continue to find and build new things.

If you are thinking about how you can find new mobile game ideas while there are already millions of gaming apps, don’t be afraid. Don’t be another Charles. Our Intelligence tools give you everything you need to find mobile game ideas.

Let’s see some examples of successful games, analyze the market and the demand.

Nowadays, we are doing pretty much everything with our phones. So why not catch a few fish, too? Hooked Inc: Fishing Game is targeting users who are interested in this hobby. As you can see, they definitely have the name for it.

We know that the algorithm prioritizes the keywords in the app title. Therefore, when you find a new game idea, be sure to optimize your app title. It will boost your App Store Optimization efforts for sure.

As our Keyword Explorer shows, Hooked Inc: Fishing Games organically rank fourth for the keyword “fishing”. And, in this way they are easily reaching to users. Moreover, they recently made a big jump and got in the top charts for sports games.

App Store Optimization plays an important role in this success and their efforts do not end with app titles. They also pay close attention to their video previews and screenshots.

They are using real game displays and banners to explain their features which they place them in order of importance. In this way, users know exactly what to expect from the game. And this simple trick helps your conversion and retention rates go up. But today we will use them to analyze the idea behind the game.

It is an important factor that the game mechanic is simple and doesn’t exhaust users. As you collect points and money in the game, you upgrade your boat and fishing skills to catch bigger fish.

The gameplay is similar to Fruit Ninja, an ex-hit game, but it offers a different concept. Moreover, it is as addictive as Fruit Ninja.

Meaning that if you find a game mechanic you like, and think that it would fit perfectly with another game concept, be sure to give it a try.

We are all addicted to our phones at some level. A bit of a stretch but “Text or Die” would not be wrong for summarizing our modern world. So why not make a game for it?

In this game, you are trying to generate words, just like Scrabble. However, here if your word is not long enough, your virtual character dies. So, Text or Die.

I am sure that you are familiar with these kinds of games where you are competing with bots. But still, they are providing the game a sense of competition which makes users stick to the game.

As you can see, the game provides graphics with no frills. This might be a trick to use when you want to put your gameplay forward. Also, it is a budget-friendly approach.

Another aspect is that their use of colors. On different levels, they are changing the background colors to alter the ambiance. As you can see in their screenshots, while one seems as calm as a vacation in Hawaii, the other seems like that you have just visited an apocalyptic future.

Rollic Games published the game not very long ago but the game has already become the number one trivia game in the Apple App Store. We can see that Rollic Games continuously tests and improve their methods through their consistent version releases.

For instance, they have updated their app icon four times since the launch of the game. Meaning that they do optimization to better engage with users. With Product Page Optimization right around the corner, creative assets are more important than ever for user acquisition in the App Store. And their App Store Optimization efforts will eventually be rewarded, resulting in even higher download rates.

One Shot Golf: Robot Golf Win. It is a very specific app title, isn’t it? When you read it, you probably thought that it’s a golf game where robots play and you win something at the end, right? Well, this is exactly the description of the game.

You control real-world golf robots, participate in tournaments, collect points and win real prizes. It has everything you need for retention.

And Happy users that will spread your game.

The important thing is to find these mobile game ideas before they go viral. Just like we do via using our App Intelligence to see the biggest movers in the app store. There is no doubt that robots and golf are an interesting combination.

Finding your next hit game is as simple as this. You just have to look closely at the market and work with the right partner. Schedule a demo today and stand out among your rivals.