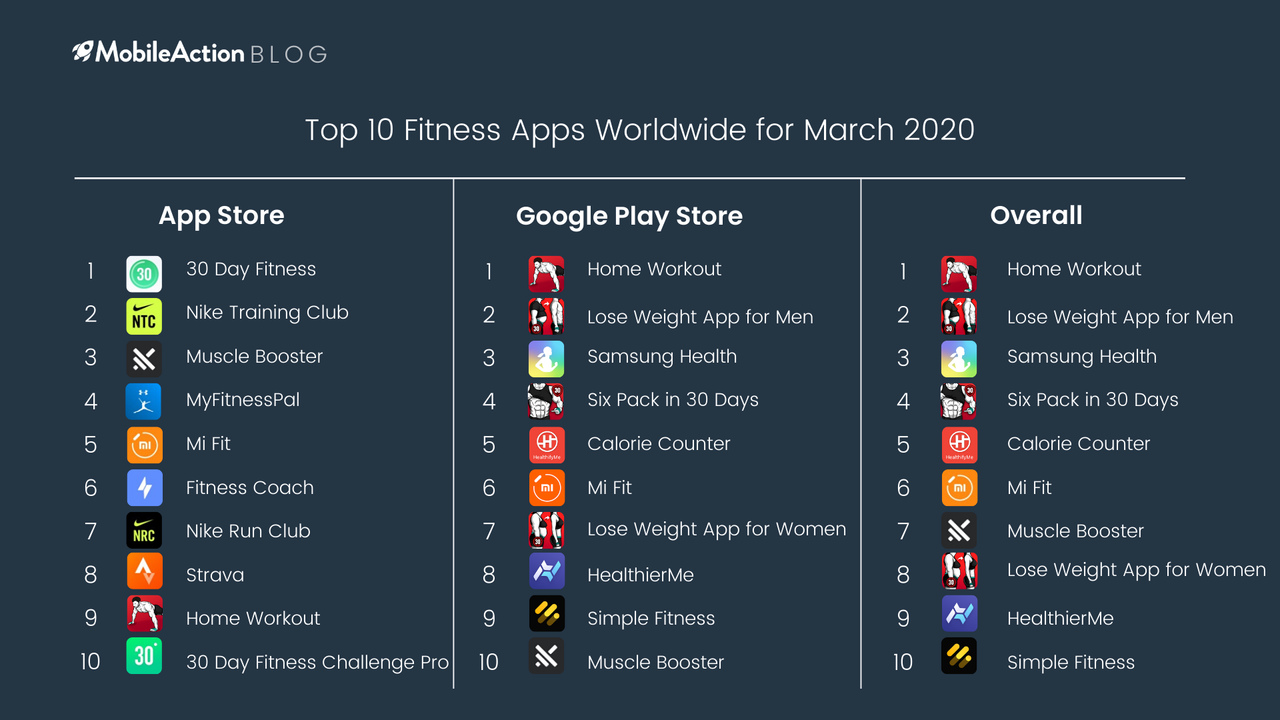 Home Workout is the most downloaded fitness app in the Google Play Store and in the overall. In second place in overall is again another app, Lose Weight App for Men, by the same publisher, Leap Fitness Group.

When we look at the apps from Leap Fitness Group, we see that they’re aimed more towards a specific audience or a goal, they’ve used words like “for men”, “for women”, whereas the apps in the App Store seem to be more in general fitness.

Let’s see together how one of Leap Fitness Group’s apps, Lose Weight App for Men got ahead in the charts, organically with their Visibility and Localization strategies.

Let’s take a look at the Visibility Map from our new Visibility Report tool from our ASO Intelligence first. In this map, you are not only able to see your app’s visibility around the world but compare it to a competitor’s. The darker the color, the higher the visibility score is for a country. And as we can see Lose Weight App for Men shows an overwhelming dominance in the map when compared with its competitor, Muscle Booster. Below the map is the graph that shows us both apps’ Visibility Chart for a selected country and date range. Let’s go with the US as both apps seem to be active there. Even at its lowest visibility point in March, it was still significantly higher than its competitor, Muscle Booster, for the US.

Let’s go over to our new tool Visibility Report, to see their localization performance distribution now.

Lose Weight App for Men has achieved a visibility score above 80 in multiple countries and we can come to the conclusion that it has done localization well with its ASO strategies.

Interested in the Visibility Report feature? Read our use case about Zoom and learn how you can make the best use of it to polish your ASO strategy. Or schedule a demo to let us guide you.

A strategy that Leap Fitness Group uses on its app, Lose Weight App for Men might be the localization.

Looking at the Audience Geography chart above, from App Analysis in Market Intelligence tool, we can see that Lose Weight App for Men is most active in India, USA, Russia, and then Brasil. Basically, it’s used all around the world.

Leap Fitness’s Lose Weight App for Men seems to be doing a good job with its visibility around the world and its localization.

Fitness apps are all the talk right now, and all over the world too. So localizing your fitness app, or any app for that matter is a smart thing to do, now more than ever. As with the quarantine that has passed a month’s period now, people are finding comfort in food. But the rise in fitness apps is showing us that they might be trying to balance the carbs, with the squats. 🙂

Interested in learning more about the data we offer? Schedule a demo with us!