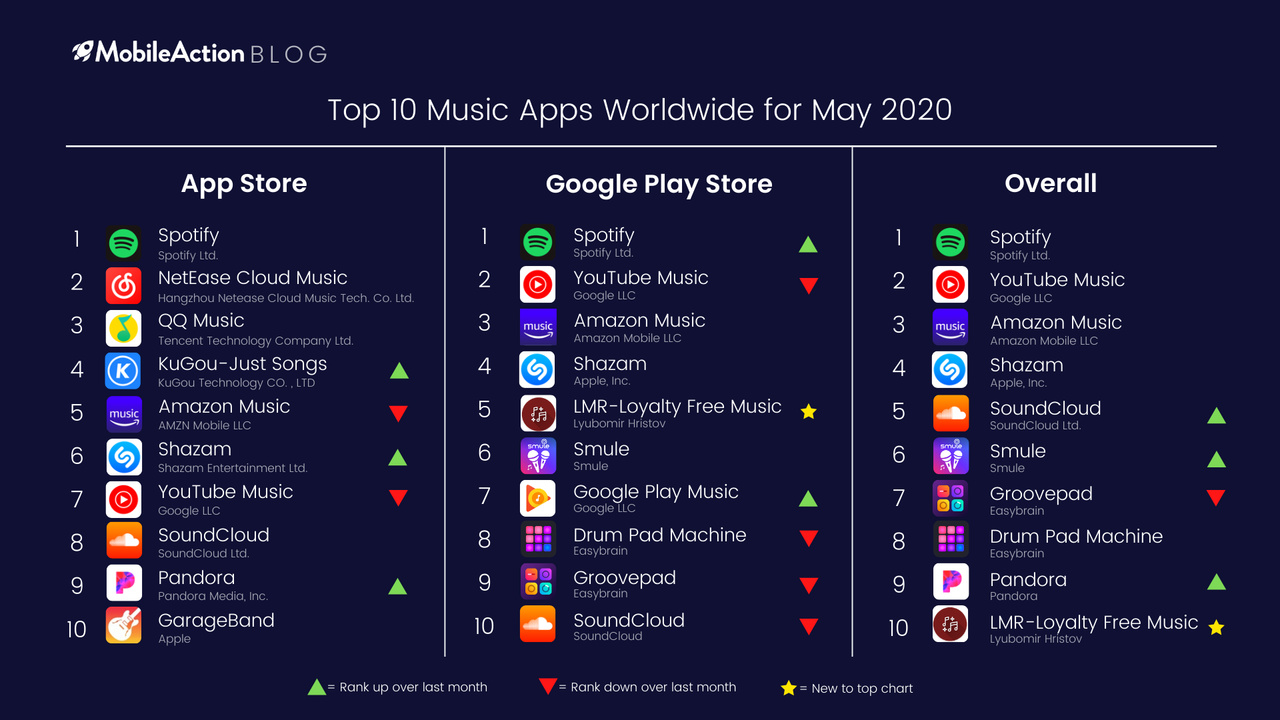 The above chart shows the Top 10 Music Apps Worldwide in May 2020 for the App Store, Google Play Store, and both stores combined. The apps are sorted based on their download numbers.

Spotify is the most downloaded app in both stores, with around 10 million downloads.

Youtube Music, being a relatively new competitor, followed it closely over on the Google Play Store. Following Spotify and Youtube Music are Amazon Music, Shazam, and SoundCloud. SoundCloud is also the only other app from the App Store besides Spotify, to have made it in the overall list.

SoundCloud has seen a rise in overall rankings since April when compared with other big names in Music apps. It is a unique music app, everyone can post covers and remixes of their favorite sounds, and get to enjoy music posted by artists that are sometimes not found on other music platforms. Since it is one of its own kind, let’s take a look at some of its data to see what kind of strategies they follow with organic and paid user acquisition; to get the number of downloads they do.

How SoundCloud gets its organic downloads

The above table is from the Keyword Intelligence feature of MobileAction’s ASO Intelligence product. It shows which keywords SoundCloud gets most of its downloads from in the App Store. SoundCloud is a strong brand name. So it’s not a surprise that it gets most of its downloads by using its own brand name as a keyword. However, it gets a good reminder of its downloads from its competitors’ brand names and their misspellings. Some examples are “spotify”, “pandora”, “apple music” “shazam”, “amazon music” etc. By now, we know this is a strategy many brands follow. But in case you had forgotten, this is a good reminder of how much your keyword strategy can affect and help your organic downloads. 🙂

To see how aggressive (or not in this case) SoundCloud has been with its ad strategy compared to similar apps in music, let’s go over to Top Advertisers list in Ad Intelligence. Here we can simply narrow the searches by typing in “music” in the search tab. We can also adjust the time frame to our liking. And pick the app store and country we want to get the insights from. We see that SoundCloud is less aggressive with its ads than Pandora, Amazon Music, or Spotify. For instance, Spotify follows a more aggressive ad strategy with its 1,962 creatives and 3 ad networks. This could further indicate that SoundCloud trusts its strong brand to bring the most conversion.

Taking a closer look at the campaign performance of SoundCloud on the App Store; we see its only ad network is Facebook. We can also see the countries SoundCloud’s ads are available in and the majority of the percentage goes to the US. While having some available in Europe and Asia too. This could tell us that these are the places SoundCloud anticipates higher returns from.

On the ad publisher side, we see that SoundCloud has 60 publishers currently running its ads. The publisher list consists of a range of apps from different categories like Entertainment, Game, Utilities, and so on. In the picture below we can see some of them based on the impression score.

During the quarantine days, we play games, watch movies, work online, even try to pick up new languages. Everybody would agree that during good times and not so great times like these, there’s always music to count on; to give us a quick break and take us someplace else than the four walls we have been staring at for too long. Happy listening and we hope you enjoyed our blog post about Top 10 Music Apps for May 2020.