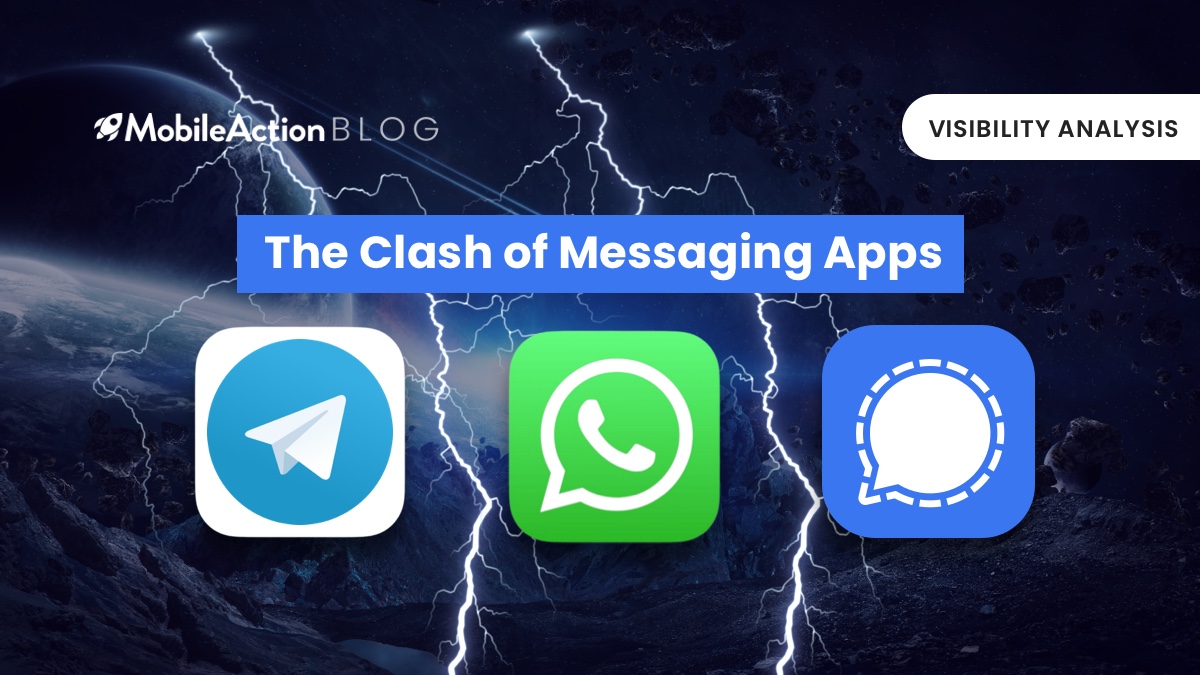 The latest update of the popular messaging app WhatsApp caused outrage all around the world. According to Forbes, WhatsApp will require users to accept the terms and conditions of the new privacy policy or have their accounts deleted. The infamous chat app is experiencing a mass exodus. Many of their estimated 2 billion customers are migrating to apps that uphold the privacy that they value.

The hot alternatives seem to be Telegram and Signal. Both apps are reported to be getting huge amounts of installs since WhatsApp’s update on January 4th. The topic is one of the most discussed issues on social media as well. Even Elon Musk told his followers to use Signal instead.

Instead of joining the rumors on the subject, let’s use MobileAction’s tools to observe the recent changes in the analytics of these apps and try to understand whether or not WhatsApp’s move affected the app’s performance.

First of all, let’s take a look at the three competitor’s Category Rankings to see if there were any changes in their spots since the latest WhatsApp Update.

As can be seen, the Category Rankings tool also displays updates on the chart, allowing us to judge whether or not updates impacted the popularity of an app. It seems that Telegram and Signal both benefited greatly from WhatsApps latest update. On the 4th of January, Telegram was ranked 139 on the overall list while Signal was in 906th place. As of 11th of January, Signal is the 1st ranking app on the overall list while Telegram took second place.

It appears that these apps drew in so many downloads lately that they were able to capture the top of the overall list. The Market Intelligence tool also supports our insight.

Once that we have established there are certainly some changes in the messaging app market, we can take a closer look at the ASO efforts of these competitors.

First of all, we can see that all three of these apps have great visibility scores. WhatsApp seems to have the edge over its competitors with a Visibility Score of 96 while Telegram and Signal are at 87 and 89 respectively.

In addition to the total amount of keywords, the app’s rankings for these keywords are also important. A keyword that you are ranking first for is likely to bring more organic installs compared to a keyword that you do not rank very high. When we look at the keywords that these apps rank 1st for, Telegram is far behind its two competitors as it ranks first for only 68 keywords.

When we look at the other two, even though Signal ranked on more keywords, WhatsApp is ranking first for 396 keywords while this number is 209 for Signal. This kind of difference is to be expected considering the position of WhatsApp in the market.

As in many occasions in life, the debate over quality vs quantity applies to keywords as well. Signal indeed ranked on more keywords compared to WhatsApp. However, the amount of traffic that a keyword gets is a determining factor for the number of installs you can receive from it.

As mentioned above, Signal ranked for nearly 600 more keywords compared to WhatsApp. When we look at their ASO Report, according to the search score, we can see that this difference mostly comes from keywords with search scores of less than 6. Thus when evaluating keyword performance, you should take into account many factors such as traffic, ranking, and the total number of keywords to make better strategic decisions.

When we take a look at the visibility map, we can see that the competition is fierce. While WhatsApp seems to be in the lead in most countries, both Telegram and Signal are starting to gain some territory. If the backlash on WhatsApp continues, it is likely for this map to change even more.

While Telegram seems to be popular in South America and South Asia, Signal appears to have taken the lead in Turkey and Colombia. Turkey was one of the countries that showed a serious amount of reaction to the changes in WhatsApps’s privacy policy. Currently, people are switching to Telegram and Signal rapidly. When we take a closer look, the competition in this country becomes even more visible.

Finally, let’s take a look at the Localization Performance Distribution to compare these apps’ performance in terms of localization.

When we look at Signal, we can see that it is in the top visibility ranger for only 17 countries, approximately a third of WhatsApps’s number. Thus, by focusing to increase the number of countries that they have good visibility for, they can increase their organic downloads.

The Keyword Intelligence tool allows us to track the source of an app’s organic downloads. Which can see which brand or generic keywords generated the most amount of installs for a certain app.

When we look at Signal, we can see that almost 20% of its organic downloads originate from competitor’s keywords. Almost 15% of organic downloads seem to come from users who were searching for Telegram. This shows that Telegram can focus more on defending its brand keyword to increase its installs.

When we take a look at the Keyword Intelligence for WhatsApp, two figures capture our attention. Just like Signal, we can see that WhatsApp also takes a portion of installs from users that were searching for Telegram. Besides, we can see that 7995 apps are ranking for the keyword WhatsApp. Because of the success of the app, apps are trying to rank for the brand keyword to increase their downloads. To illustrate this point, let’s take a look at the figure below.

On the left-hand side, we can see the visibility score of Signal represented by the blue line. Since the 4th of January, an uptrend seems to have started for the app’s visibility score. This graph also allows us to see updates of the app. We can look for changes in amounts of keywords ranked or visibility score after updates to see if ASO optimization efforts have paid off.

On the right-hand-side, we can see that Signal is only ranking for 4 of its brand keywords (this number is 16 for Telegram app and 50 for WhatsApp messenger).

On the other hand. Signal is ranking for 123 brand keywords that belong to other apps (this number is 99 for WhatsApp and 61 for Telegram). This creates more potential for organic downloads that originate from users who were searching for different apps.

Future of the Competition

With the latest update that modified the privacy policy, WhatsApp has been one of the most controversial topics of the last week. Having users all over the world, a global backlash caused users to start switching from WhatsApp to other messaging apps such as Telegram or Signal.

We can not be sure whether or not WhatsApp will change back its privacy policy. However, close competitors have greatly benefited from this turn of public opinion. Both Telegram and Signal increased their rankings in the charts.

ASO is crucial even for the biggest apps. In just one day, perhaps one of the most popular apps found itself competing with others for maintaining its user base. That is why staying on top of your apps ASO health is critical for your app marketing strategy. If you want to learn how you can use our tools to increase your visibility in the app stores, schedule a free demo with our growth consultants today!

« Roblox: Taking the Adventure to the Real World
How To Find the Rising Star Apps to Invest »

An Ultimate Guide for App Store Keyword Optimization for…

How to Conduct a Complete ASO Audit