Go to SearchAds | Contact
Blog The Grand Mafia: How to Build A Killer Ad Strategy

The Grand Mafia: How to Build A Killer Ad Strategy 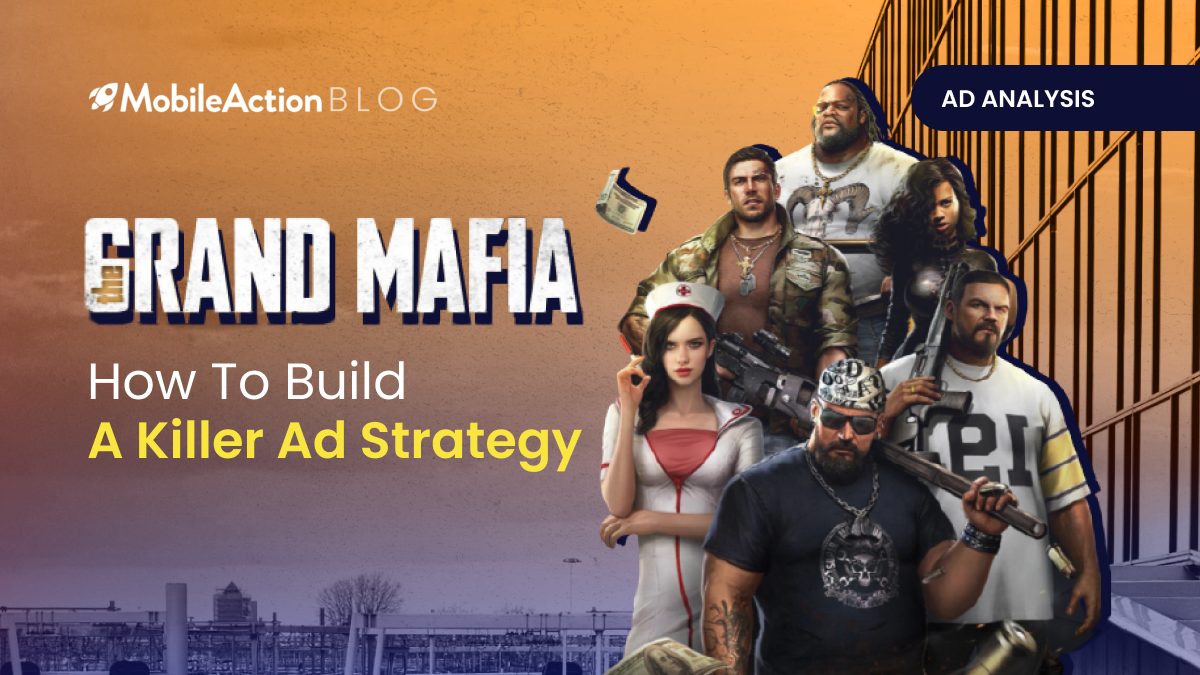 Mobile app marketing is an uphill task that requires consistent effort. It takes a lot of research, cogitation, and experimentation before you smash the top charts. However, you can’t pass up marketing because you can’t do business without it. Just like you cannot properly and efficiently do ad strategy analysis without our intelligence tools.

Let us show some evidence to that claim.

Let’s get it started.

What is The Grand Mafia?

We always say the first rule of advertising is to know your product so you can know your audience. So, first, we go to our App Intelligence.

The Grand Mafia is a strategy game where your main goal is to become the infamous king of the underworld.

As we can see from the description and screenshots, the game offers every aspect of mafia life. Robbery, fights, luxury vehicles, etc. So with a game like this, it is clear that our audience is a strategy and action lovers who love mafiatic elements. It means that we can descend upon related keywords on Apple Search Ads.

We will take a closer look at their Apple Search Ads strategies later in the post. Now let’s get back to the app profile.

The game gets listed in both app stores and has similar visibility scores in both of them. This is to say, they approach both stores with a similar app store optimization strategy.

However, their category rankings differ. In Google Play, they rank in the top ten while in the App Store their ranking is around 40 amongst Strategy Games.

It is possible that the ad strategy of Yotta Games for Google Play might have worked better than their App Store advertisement. However, it is also a fact that user preferences change across platforms which might also be the underlying reason.

We have already seen in our Hyper-Casual Ad Analysis that app stores have different dynamics. That is why the approaches of app marketers differ from one store to another. For instance, in Google Play play app marketers run more unique ad creatives than they do in the App Store. The situation is no different for The Grand Mafia.

This data indicates that they are conducting more A/B testing in the Google Play store. However, when Custom Product Pages become available in the App Store, we might see a trend where app marketers increase their A/B testing efforts in the platform. The ability to direct paid traffic to customized landing pages will certainly impact the way paid user acquisition is done in the App Store.

Ad Networks of The Grand Mafia

What’s a Mafia without connections?

The number of Ad Networks The Grand Mafia have utilized in the last month is 11. It seems that they split their focus between Admob and the social media platforms as these both have 49% of total creatives.

Moreover, their total ad publisher count is 19.823. They have a wide range of ad publishers from different app categories. In this way, they ensure that they reach out to most users as possible in different audience groups.

We all know that what matters is not what we say but how we say it. Bill Gates summarizes this up as “Content is king.”. If so, the format is the queen.

As you can see above, The Grand Mafia has a completely different ad creative format distribution.

In the App Store, The Grand Mafia benefits from the HTML format the most. Video ad creatives still have a nice share but it is not as dominant as in Google Play.

Although we cannot say for sure, the discrepancy between the category rankings might have occurred due to this format distribution. Why? Because they really have engaging video creatives.

Let’s start with a general look at their ad video creatives.

In order to see ad video creatives of The Grand Mafia, we go to our Ad Intelligence tools and click on the Creative Analysis feature. We filtered the search by ad format, status, and date so we access all the active ad video creatives in the last month.

As you can see, they have various scenarios for their ad video creatives. They don’t bombard users with the same content every time. They change characters, location, and the storyline. So whenever users encounter The Grand Mafia’s ads, they experience something different, which also helps reduce ad fatigue.

Here, they show a video of two guys robbing a bank, one gets caught and the other has a choice. Save him or run away.

Are you going to join the mafia or stand against them and build your own gang?

Can only guys be the Mafia bosses? Definitely not. Here in this video, The Grand Mafia shows that it offers equal chances. Whether a boy or a girl, you can come from scratch and have it all. Moreover, you can play The Grand Mafia. Do you see how engaging their ad creatives are and how they address everyone in their ad campaigns? You can also see that they are localizing their ad video creatives. In this way, they embrace non-English speakers too and grow their user base.

If you want to turn your app into one of the most popular game apps, an aggressive mobile advertising strategy such as The Grand Mafia will definitely speed up the process.

Now, let’s check out how they are benefiting from Apple Search Ads in their mobile user acquisition strategy.

We cannot claim that The Grand Mafia dominates the Apple Search Ads as they do the underworld. However, they are currently utilizing 550 paid keywords in the United States.

However, when we take a closer look at their Apple Search Ads strategies, we see that they have done a pretty good job defending their brand keywords.

As you can see above, they get at least 73% of the impressions for these keywords. In this way, they ensure that users that search for them see them before any other app.

At the beginning of the post, we looked at the app profile and defined a possible audience. People who will love The Grand Mafia are probably fans of criminal and gangster games. Therefore, people may not have heard of The Grand Mafia. However, it doesn’t mean that The Grand Mafia cannot appear on the lists for popular games in this genre.

The Grand Mafia bids on these keywords above and ranks in the top three in the distribution of impressions share. As you can see, all of these keywords have pretty high search scores. Meaning that The Grand Mafia might be getting a high number of downloads although they don’t rank for them organically. This is also one of the factors that allowed Apple Search Ads to become one of the most effective app user acquisition channels in the App Store.

That’s all for the mobile ad strategy of The Grand Mafia. Advertisement is an uphill task but we can help you get to the top. MobileAction is the perfect place to craft your mobile game user acquisition strategy. Schedule a demo now and let’ get going.

« Seasonal App Marketing: How to Prepare Your App for The Holiday Season
Top 10 Mobile Games in the US for October 2021 »