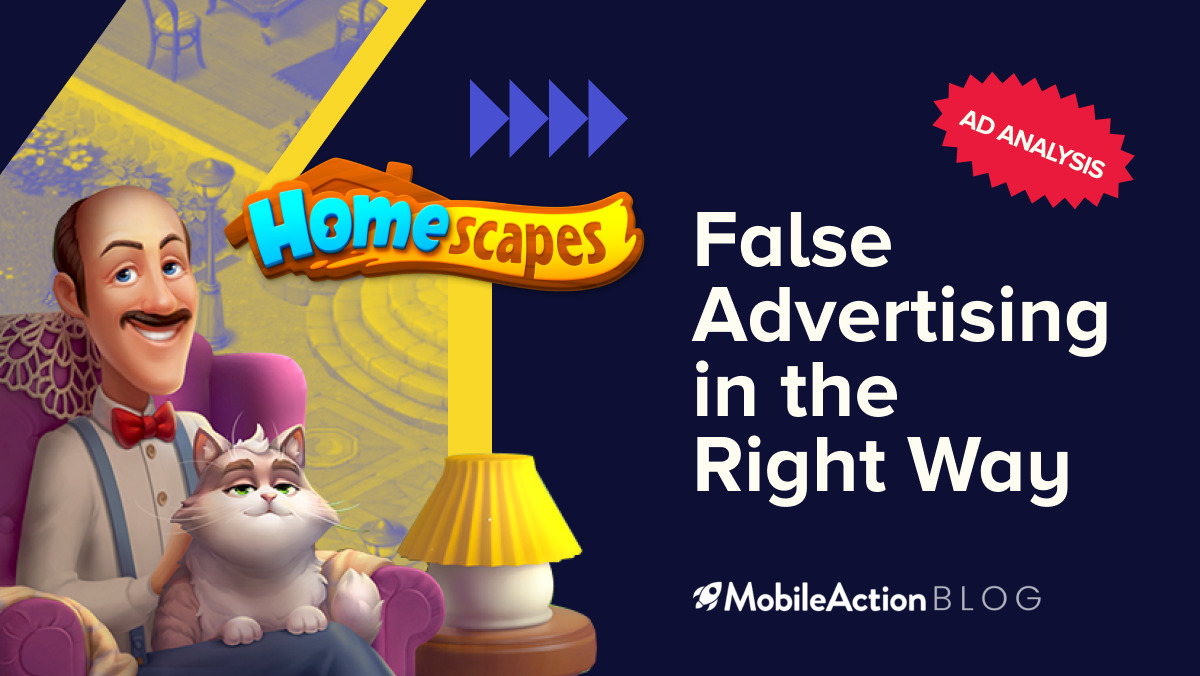 In the world of mobile games, there have been various questionable practices for quite some time, all in the name of profit and immediate mobile user acquisition. On any social media platform, you have most probably come across such intriguing ads for a mobile game that you want to download eventually. Then, you’ll notice that the game is mostly off the track with the one displayed via the ads you’ve run into,  which is a method utilized by Playrix especially to advertise Homescapes. So let’s run Homescapes Ad Analysis to understand what they owe their success to, shall we?

The most effective way to advertise your game is with a thorough mobile ad strategy. This strategy is your plan to reach out to users in hopes that they download and install your game, leading to an increase in your revenue. Among the numerous possibilities, the ultimate goal of your mobile ad strategy is for you to be noticed. Then, it’s all about how appealing your ad is to users so as to download your game. And the last and arguably most challenging part comes in: retaining users.

Naturally, many players are disappointed or frustrated after downloading and playing the game they have not anticipated due to its ads. Then, the question comes to mind: Why are mobile game companies still practicing this strategy?

In the mobile games industry, Homescapes by Playrix is just one of them implementing such unconventional strategy, but a case point because of their being giants in this industry. Playrix must be taking some kind of advantage from this strategy. Let’s first look at what Homescapes is about, who is playing it, and how successful it is. And then, we dig deep into the advertising strategy of Homescapes while trying to figure out the reason behind its strategy.

Putting in a Nutshell: Homescapes

With house decoration layers at its center, Homescapes is a match-3 puzzle game with a story progression. That is, players need to solve match-3 puzzles in order to earn the resources required to renovate and decorate a home. During the game, players are accompanied by many interesting characters and mostly Austin, a character who tells stories about his childhood and relationship with his parents.

Homescapes as a Top Advertiser

The mobile game industry is competitive in nature. Still, major companies are developing cutting-edge technologies and launching new products to keep pace with the industry because of the potential for growth.

In this fierce competition environment, Homescapes has never dropped out of the top 30 on the Top Advertisers list since the beginning of 2022. In February 2022, it was 4th in overall advertising. Its total impression score for that month is 2.539,191, and its creative count is 2.182. The numbers for the last four months of 2022 present that its total impression score is over 5 million, with a creative count of 7 thousand. It’s true as steel that Homescapes has set a course for a bone-deep and aggressive advertising strategy throughout the beginning of 2022.

Let’s continue our Homescapes Ad Analysis with their Campaign Analysis. For the last month, April 2022, it has actively shown up in a total of 15 various ad networks. Facebook was their main ad network with 21 percent, followed by Messenger and Instagram, and other networks in a descending sort. At this point, it’s more than probable that Homescapes receives better returns than in-app advertising channels in terms of user acquisition via social media channels. That’s the reason why it gives priority to them in its paid advertising.

Homescapes had about 11.028 total publishers. You can assure that number’s being highly competitive by looking at this benchmark:

A web-based word game competing among the trendiest apps in the market such as TikTok and Youtube, Wordle!, had 2.662 total ad publishers last month.

Homescapes has closed the last month with 1.096 creatives, 558 of which have been active.

Together with a number of different countries where its advertisements are active, the United States and Italy call the most attention.

It’s a common practice for mobile game advertisers to use video creatives in order to convey the value of the game to users. Naturally, you can adopt a specific angle to advertise your game or user incentives to produce intriguing video ads. Yet, these creatives are supposed to be reflecting on real gameplay experiences because they need to illustrate why this particular game is convenient for the viewer.

Homescapes, on the other hand, doesn’t exactly reveal real gameplay through its ads, as we’ve discussed earlier in this post.

You have probably seen these ads: You are generally offered two equipment choices to repair a breakdown at the house. One of the equipment aids characters in preventing a potential disaster. However, this isn’t an accurate representation of the core gameplay because it’s a match-3 puzzle game with decoration and narrative elements thrown in.

These ads with character-saving and house-repairing are, in fact, a part of the game, but they correspond to a snowball’s chance in hell.

At this point, checking the app page on the App Store or Google Play Store lies on users’ hands. On its pages on both stores, Homescapes presents genuine screenshots of the real gameplay to users. In other words, users have a chance to be familiar with the actual storyline of the gameplay just before they decide on downloading it.

Now, let’s run our eyes over some of Homescapes’s ads.

Thanks to MobileAction’s Ad Intelligence tool, we are able to discover the top creatives of Homescapes with the impression distribution for different titles and subtitles of creatives. Also, you can filter the creative library by platform, date range, country, ad network, as well as advanced filter options such as media format and video duration.

When you click on a creative of Homescapes, the window above pops up where you can see the details of this particular creative such as its titles, subtitles and media type and status. You can also see the ad networks and top ad publishers, along with how long the ad is active.

Having these insights into the market opens you up to many opportunities. The examples for these opportunities can be varied from uncovering the strategies your competitors follow with their top-ranking ad creatives and the elements they practice on like daring titles. Thanks to these market and competitor insights, you can come up with brand-new strategies for better ad creatives to be ahead of the competition.

Videos, images and interstitial ones are among its most popular creative types.

What we have seen on our Homescapes Ad Analysis is that their focus is social media and they are benefitting from video creative the most. As seen, the top 3 creatives of Homescapes are all videos, and their ad networks are Facebook, FacebookNative and Instagram.

This is an interstitial video ad of Homescapes, in which you are asked to help the characters renovate the room they wish by spending your coins on furniture. When you are done, you win an award, and more characters come up waiting for your help.

This ad is all about decorating, the most up-front metal element in the game, and aims at the viewers who are into home decoration games.

This is an example of a classic mini-game ad for Homescapes. There are lots of variations, and the only thing varying from ad to ad is the puzzles.

Here is the basic concept: The characters are in need of help to survive in a weathered house. You are first asked to choose where to begin with the renovation. Then, you must decide on the right equipment to repair the house or solve a puzzle. Though both could easily be achieved with a bludgeon, the ads end up with a fail which drives you to think they’re smarter.

Similarly, this ad for Homescape is puzzle-based, but with decoration elements, speaking to the meta elements of the game.

The difference from the other two ads is its being three-dimensional, aiming to transfer the real sense of playing to the viewers. Still, it doesn’t reflect the real gameplay experience.

From the users’ perspective: Homescapes

Users are expected to say something about the game they’ve downloaded after engaging with the ad.

Through MobileAction, we’ve analyzed the reviews of Homescapes, mostly related to its ads, in order to figure out what this strategy seems like from the perspective of its users.

The majority of one-star reviews express disappointment with the game due to deceptive advertising.

Despite the false ads, some users still seem to find pleasure in the game.

Others don’t seem bothered by the false ads. They are simply pleased with the game for what it is.

When it comes to the review breakdown of Homescapes, the majority are one-star and five-star reviews.

Reaching out to a broader audience with deceptive advertising comes at a cost. Some players aimed at via these ads may end up with joy from the game, whereas others may be disappointed, resulting in bad reviews. At this point, practicing such an advertising strategy is at your own risk.

The success of Homescapes is undeniable. Whether you agree with the advertising strategy of Playrix or not, you can learn lots of lessons from this top advertiser.

It’s not a piece of cake to stay as a top advertiser. You need to be constantly aligned with the ad strategy you have set a course for so as to grab the attention of users. That’s how Homescapes has paved its way to top advertisers.

As we have covered, like all strategies, having a misleading advertising strategy would come off with pros and cons. We recommend you go over and over Homescapes’s advertising strategy till you get the idea of why and how it’s still following such a strategy. Then, add your creativity to make your ads appealing to different audiences, and remember that persistence is the key.

That was all bout Homescapes Ad Analysis but you can do much more and learn about the advertising strategy of the giants of mobile games. Schedule a demo with our experts now, and we’ll show you around the world of ad publishers.

« How to Design Better Creatives for your Mobile Game with User Motivations
Hit your Mobile Growth Targets with MobileAction’s Free Forever Plan! »