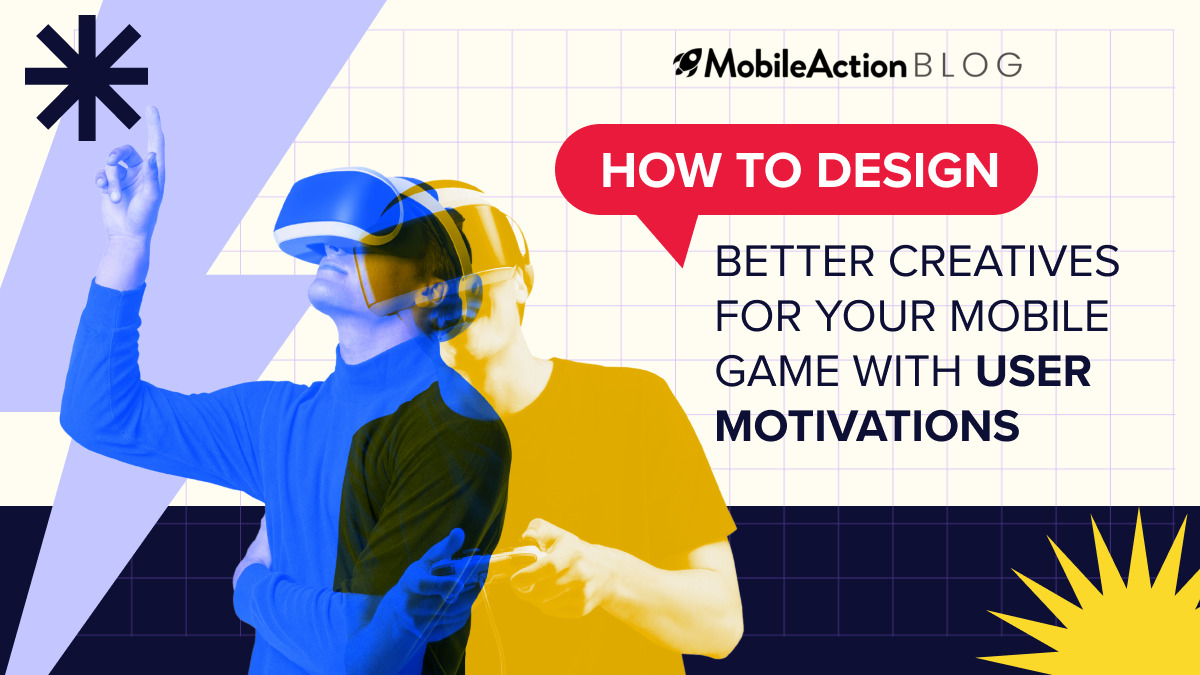 We won’t tell you how tough the competition is in the gaming category. You already know that. And we certainly won’t tell you how important it is to have an effective ad campaign in the gaming category. You know this one, too. What you may not know is that you need to leverage user motivations for designing better ad creatives because they will increase your conversion rates drastically.

The first rule of advertising is to stick in mind. You want people to remember your ad and your brand so that you get brand recognition. Unfortunately, you cannot achieve this with average creatives. You must set yourself apart from the rest with different and quality creatives.

Plus, if your goal was to become just another fish in the sea, you could have done this without spending all that money on advertising, right? So running slipshod and mediocre creatives is not actually a cheaper way of advertising. Instead, they cause you to spend more as you’ll run more creatives that won’t bring the results you want.

On the other hand, quality creatives will make you differentiate from others, and bring better click-through rates and better ROAS.

So, you should run quality creatives because they:

According to Statista, there are over 2.6 billion active gamers worldwide. As you can see the demand for games is pretty high, and the supply part is pretty crowded as well. As of September 2021, there are more than 1 million gaming apps in the App Store alone.

In short, there are billions of prospects who have millions of options. And you have limited time to draw their attention. If they don’t see what they are looking for in the first three seconds of your ad, they will just close the ad screen or keep scrolling. In other words, you can’t afford to show a power-motivated user a creative that doesn’t highlight this motivation.

Remember, you don’t have to sell your app to everyone, you only need to sell it to the ones who actually want it. In this way, you will spend less and earn more. And that’s why you should benefit from motivation-led creatives.

What Are User Motivations?

Gamer motivations are terms we use to describe the decision-making process behind game preferences. In simple words, gamer motivations refer to the motives behind the selection of a game, and we will utilize these motivations to better address our audience.

But before that, let’s get acquainted with the 8 common types according to Facebook Gaming.

Self-expression: Users with this motive want games where they can express their creativity and identity, whether it’s painting a car, building a character, or designing a home.

Progression: Users with this motive want games where they can build things, make improvements, and see progress.

Discovery: Users with this motive want games where they can experience the thrill of discovery with big maps, multiple worlds, side quests, etc…

Escapism: Users with this motive want games where they can escape from the reality so they look for games with fantastical or role-playing elements.

Social Connection: Users with this motive want games where they can connect with other people. This can be joining clans, teaming up, competition, or collaboration.

Expertise: Similar to progression but users with this motive want games where they can overcome challenges, solve puzzles, and master every facet of the game’s offerings.

Power: Users with this motive want games where they can be kings and bosses and want to attain power via taking objects, and territories from other players.

Relaxation: Users with this motive want games where they can just kill some time while waiting for a bus or a meeting so they look for stress-free and slow-paced games.

Don’t forget that motivations are about the gamers!

This means that you cannot influence these motivations. However, you most certainly can benefit from them to reach your mobile user acquisition goals by addressing the right user motivation with a suitable UI experience in your creatives.

So, which one you should rely on to build your marketing strategy, right?

The answer is, all of them.

You don’t want to leave any of these user motivations behind because leaving them out means leaving out users who are looking for those motivations.

Once you decide which user motivations your game targets, the next step is designing. Here, you should focus on designing a strong and engaging creative with a clear message. With our Ad Intelligence, you can instantly see competitors and their creatives to find design ideas or learn from the market.

We used the Top Creatives feature to find examples of motivational creatives. We filtered the search to see the best-performing creatives in strategy games last week on the iOS platform in the US. And yes, you can filter your search in such detail, and even more.

To better understand the designing step, we will analyze two examples from “Forge of Empires: Build a City”.

Here, the video opens up with riveting action and shows what the game offers to the users. The video is truly engaging however there are two major issues that can take an axe to the impact of the creative.

Ps: There is nothing wrong with showing your brand/app name at the end of the video, too. Just make sure that you show it at the beginning as well.

Here, we have another video creative from Forge of Empires to show you the difference banners can make. As you can see, they use banners to describe their features, and by doing so, the video makes sense even without sound. So no more losing users to the quiet mode.

However, they, again, didn’t show their brand/app name at the beginning, which is a mistake as explained above.

So, let’s sum up the findings for this step.

So based on what was mentioned above, you designed several creatives. Now, it’s time to see how they perform! Because there is no pride or profit in running underperforming creatives.

For instance, you might realize that one of your creative templates performs better than the others. So, you can analyze that template, and utilize the stand-out element more often in others. It can be a background color, text font, or position of an element.

Or you may have a small budget or a small creative team. In this case, you may want to remove underperforming user motivations from your motivation-led creative plan. In this way, you can focus on the ones that perform well and maximize your growth.

As explained above, once you detect the problems in your motivation-led creatives, you have to take action and optimize your creatives. Once you do so, study the results again, find new points to improve, and optimize again. Because the app market is constantly changing and evolving so you should adapt to these changes.

The battle for user acquisition in the gaming category is brutal and the MobileAction is the best power-up there is. Schedule a demo with our experts to see it yourself.