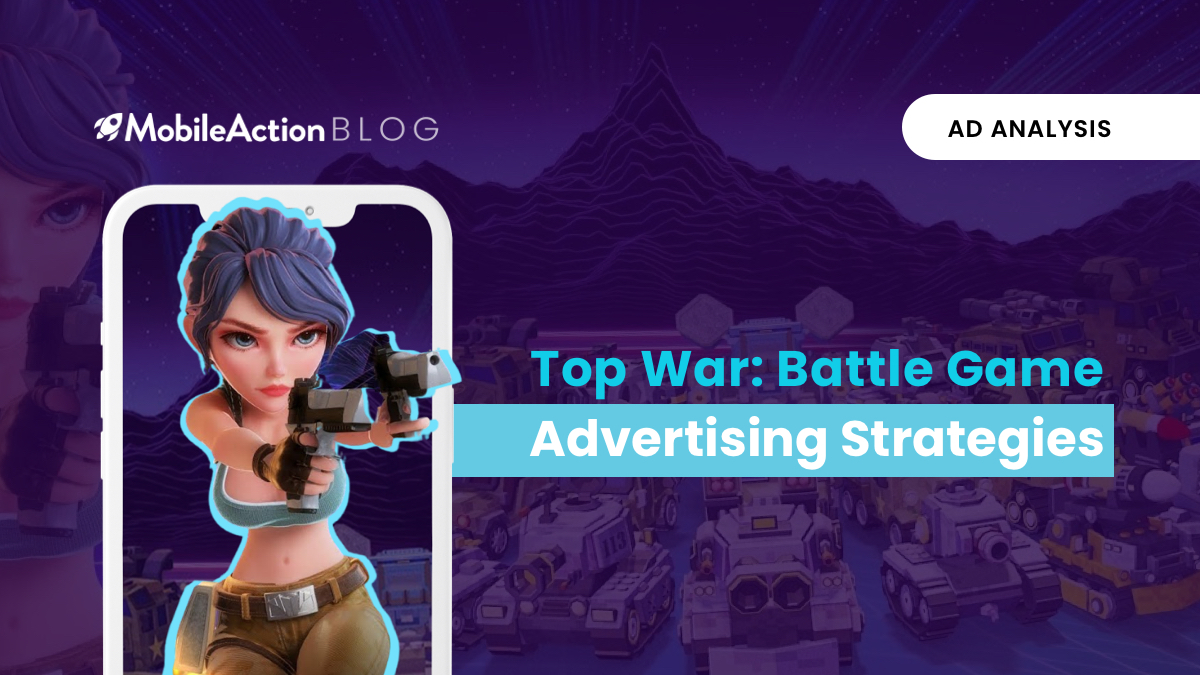 Top War: Battle Game was long-standing at number 1 in advertising in the Apple App Store. They have recently dipped down below Homescapes. Nevertheless, their creative strategy has quite a lot to learn from. Analyzing their creatives can give us a good idea of how to structure a user acquisition strategy for war game apps. You will certainly be able to apply their strategies to your own app marketing and user acquisition. Let’s take a look at what this game does in terms of advertising to see if we can glean anything from this advertising giant.

The App page for Top War: Battle Game shows us a game with a steady incline in reviews and ratings and a  significant number of downloads. The application has a Visibility score of 80 in the Apple App Store.

It does not hold the same high ranking in the Google Play Store. In the Play Store, it is currently sitting at 17th overall in advertising. Here we can also see that it has a lower Visibility score. However, it still gets more download in the Play store. This is due simply to the fact that this is a larger market. There are more android users than iPhone users so it is not entirely surprising that it has many more downloads there. The application across both stores is an app marketing giant.

The game also has more low ratings on the Play store. This may, once again, be because it has more downloads. The more people who play a game the more people are bound to have something to say about it.

Creative assets are a crucial part of user acquisition strategy. This app has lots of data to look at and a strong app marketing strategy that you can apply towards your own user acquisition.

In the app store, the game totals 1824 creatives with 704 active creatives.

The vast majority of its ads run on Facebook and 83 percent of them are videos. The creatives reach people all over the world. The country being targeted the most by the app’s creatives is the United States, followed by Qatar and Saudi Arabia.

There are many other similar games to this one in the App Store and all of them are competing to stay relevant. The game style itself remains very popular, so it is key for the creatives to show how fun the game is, how clean the graphics are, and make the gameplay look exciting. It is also crucial to be shown to as many people as possible. When there are many versions of almost the same game to play, it is important to stand out by producing a high-quality product and by making yourself more visible than your competitors.

Some of the creatives do not directly show what the gameplay looks like but rather advertise a specific task. Interestingly, these end card images do not even specify which game it is. The app does not give us a call to action in this creative. Rather they want us to click on the advertisement directly to download the game.

This creative shows what the gameplay would look like and also has a call to action for the App Store, the Play Store, and the search term to type into either store.

We can see this by looking at the localization performance table. The application scores over 60 in 43 countries and over 80 in 10.

Top War: Battle Game already has some interesting ASO strategy going on in the title of the app itself. Whether someone searches “Top war game”, “Top battle game” “battle game” war game” “top war game” or just “top game” this app has the potential to show up. These are high ranking keywords and it is smart of them to make them the title of their game.

Aside from that, the name is easy enough to remember. Though it is clearly very ASO oriented, the name is still simple enough to be a marketable brand name.

This strategy calls back to the strategy surrounding their visual creatives. The game is trying to make itself as visible as possible, and seem as good as possible because it knows it will be competing in a sea of many.

The search “Top war” can also be an indication of people simply trying to find the best war game. Therein lies the cleverness of the name.

What are the key points of their strategy

What can we learn from them

If you would like to learn more from top advertisers in any category across either store, try researching with our platform. You will have access to all creatives with our ad intelligence tools, active and total, from all apps across the app store as well as ASO and localization insights. You can also compare your own app against these high performing apps to get the best possible results. Sign up for a demo with MobileAction and see for yourself.

« There’s an AmongUs imposter Among us
Getir: Delivering Success »