Blog What is the secret behind IQ Option - FX Broker?

What is the secret behind IQ Option – FX Broker? 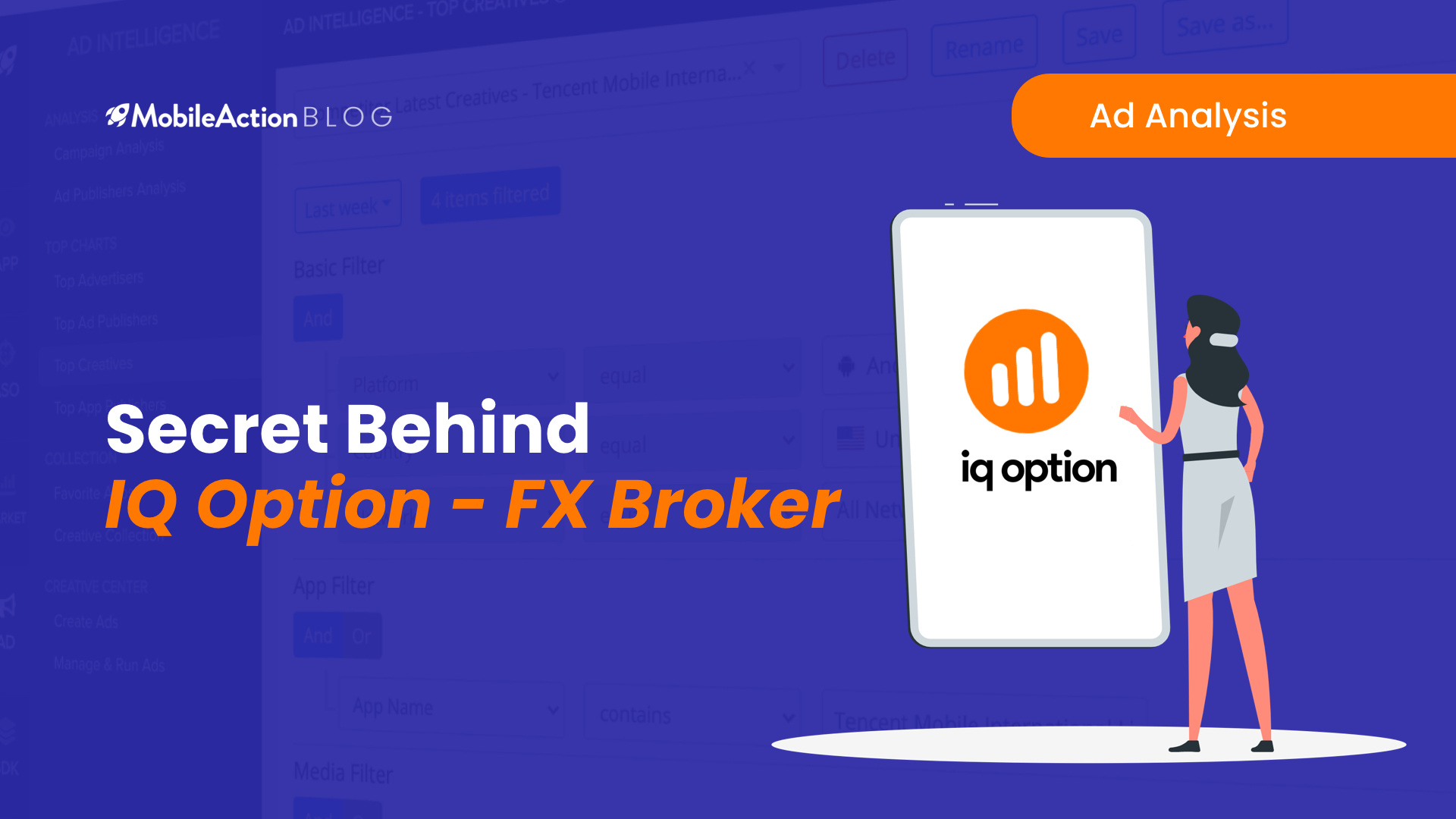 Competition in the mobile app industry becomes more intense every day. Not just because new apps are being developed to join the rivalry, but also it is much easier to perform with ad intelligence tools. These tools help mobile app companies uncover all the competitors’ ad networks to see where their creatives are placed and ad publishers to see their target audience. They also reveal countries where competitors run their ads and all the creatives they have published and are currently publishing. Hence, app developers are able to shape their campaign strategies accordingly.

Top Advertisers section in MobileAction’s Ad Intelligence sorts the apps which have the highest ad impression scores.  Without a doubt, the main dominators in Top Advertisers are mostly the gaming companies since they have to follow an aggressive ad campaign strategy. They need impressions and installs so that they can sustain their position in the rivalry. However, sometimes apps in different categories also appear in Top Advertisers that also run aggressive ad campaigns. IQ Option – FX Broker, is one of those that made it to the top!

IQ Option – FX Broker is a finance app that has been increasing its impressions since March 2020 by applying some changes and finding out the best strategy that works for them. From the beginning of April, they’ve reached Top 15 advertisers and have been holding this position since then as the only finance app in the App Store. Let’s investigate the secret behind their success and see the possible changes they’ve done that led to an increase in impressions with our Ad Intelligence tool.

The picture above shows the  Campaign Analysis of IQ Option – FX Broker in October. As we can see, their main ad networks are Unity and Adcolony and they spread their ads over 11 other channels. They get their impressions mostly from AdMob with 34%. However, at the beginning of April, they have started using Adcolony as their main ad network and received most of the impressions from them until today.

In March, there were only 3,912 apps publishing their ads. After increasing the number each month, they have reached 19,154 publisher count by October, which is an extremely competitive number when compared to other apps that are also following an aggressive ad strategy. To give a better idea, Gardenscapes, one of the popular match-three games, has 13,866 publisher counts.

The app has 726 active creatives among a total of 955. As we can see, 30% of the creatives are in HTML format. When we turned back to previous months to analyze it deeply, we realized that they had no HTML creatives until June. Then, they started publishing HTML ads and increased the amount each month. It wouldn’t be wrong to say that this format may be working for IQ Option – FX Broker since they currently have more HTML creatives than videos and images.

IQ Option – FX Broker is being distributed in countries located in South America, the Middle East, Africa, and Asia. They distributed the shares almost equally for the countries. As we can see above, their main focuses are Brazil, Thailand, Colombia, and South Africa. However, they get their impressions mostly from India with a share of 20.87%. Although they mainly use English for their ads, they use Spanish, Portuguese, and Malaysian as well.

We filtered out the top creatives of IQ Option – FX Broker for the iOS platform and chose India since most of their impressions are coming from there. Now, we will have a better idea of their strategy and see what is working for them.

The picture above is the top 6 creatives of IQ Option – FX Broker. It can be seen they are publishing HTML, images, videos, and even interactive ads. Let’s look deeply at its interactive ad by clicking on it.

This creative is distributed by two ad networks: Unity and Ironsource. They have done A/B testing by changing the title and body to see which one will get more impressions. By moving your cursor to related titles, you will be able to see the whole text and compare it with the previous ones. Below the title section, you can see which apps their ads are appearing in. Last but not least, this ad has been appearing for almost 230 days and is still active.

Curious to see more ad strategies? Schedule a demo and let us show you all the big players’ ad strategies and more insights!