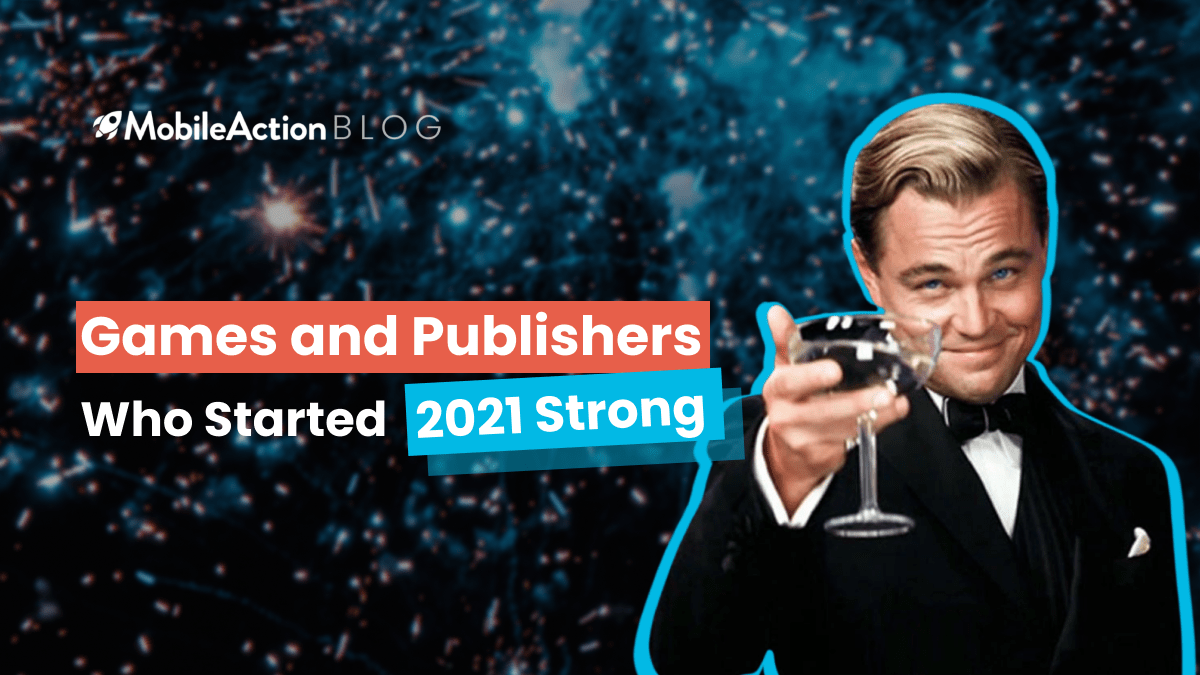 Having a good start to a new year is important! It encourages us to pursue more success. App marketing is no exception. Some publishers were more successful than others in creating an app marketing ad strategy, which increased their app growth in the first month of 2021.

Today, we will take a closer look at some of these successful apps and their publishers to understand their ad strategy.

Through our Ad Intelligence tool, we can take a look at the top App Publishers for any given time interval. This list allows you to see app publishers and their top performing apps.

One app of Supersonic Studios LTD has been particularly successful. That app is Stacky Dash.

After its release in late December, Stacky Dash did not take long to reach the top of the charts in the Google Play Store. The user acquisition strategy that Supersonic Studios pursued for this app seems to have worked. Let’s take a closer look at their ad strategy to better understand their app marketing strategy.

Stacky Dash currently ranks 399 in the Top Advertisers list and uses 11 ad networks to distribute more than 100 creatives. The app is using 2,675 Ad Publishers to distribute their creatives. Their preferred Ad Network seems to be Facebook as it seems to take nearly 50 percent of all the advertising efforts. As usual for the game category, mostly video type creatives are being utilized by the app.

As you can see, the video creatives of the game are not very complicated. They simply display the in-app user experience to potential users. When we take a look at their creatives, one other thing draws our attention.

Stacky Dash appears to be localizing their creatives for their ad strategy. In this creative, ‘I can’t reach Berlin’ is written. We can see that it is used in Germany.

The same creative is used in France, however instead of Berlin, now Paris is used in the text.

Localization can be an important tool for making your ad strategy more efficient. From this example, we can see that Supersonic Studios is optimizing their creatives according to the region which allows their rankings to increase. If you want to learn more about localization, feel free to check our guide.

Another app that started 2021 strong is Oh God! by Alictus. The idea of the game is that users act like God and decide whether people should go to Heaven or Hell. Not surprisingly, the developers have decided to list the app under the Game-Simulation category.

Since mid-December, the game has been rapidly increasing its Category Rankings. The straightforward concept of the game paired with attractive colors seems to be drawing in lots of users.

The game claims to have simple but addictive gameplay with beautiful graphics on its listing page. Let’s take a look at some of their creatives to observe how they conduct app marketing for their product.

As the developers claim, the game appears to have a simple gameplay. Additionally, the graphics seem to be very pretty.

Even though the app started 2021 strong, time will show us whether or not the controversies will overcome their success.

Released toward the end of 2020, High Heels has been blowing up in the App Stores. The game also seems to be using App Store Optimization for their app marketing strategy, as indicated by a very high Visibility Score, 90.

The game is also receiving highly positive reviews, which is important for both ASO and conversion optimization. The higher the average rating your app has, the higher the likelihood that the users will download it after viewing your listing page.

When we take a look at High Heel’s Category Rankings,  we can see that the game reached the top of the rankings in a rather short period. Let’s take a look at some of their creatives.

Again, the game displays its gameplay in the video creative. Even from a ten-second video, watchers can understand the overall dynamics of the game.

Even though we focused mainly on the paid growth strategies of apps using Ad Intelligence tools, there is no harm in checking High Heels’ ASO strength.

Keyword Intelligence allows us to track the sources of organic downloads for a given app. High Heels appears to be generating a lot of downloads from generic keywords. Once again, we can see the importance of targeting the proper keywords. High Heels is generating nearly 66% of its organic downloads from the keywords “games”, “free games” and “game”. These keywords are highly competitive as can be seen from the number of apps ranking for them. A good ASO strategy can highly improve the efficiency of your overall app marketing strategy just as in the case for High Heels.

2020 has been a difficult year for many of us even though the mobile app industry has thrived during the pandemic. There is no doubt that the competitiveness in the market will continue to increase as more publishers and apps take their places in the race.

Having the proper tools to deal with such competition is crucial for your app growth. MobileAction will continue to lead its users to success in 2021 as well. If you want to learn how you can improve your mobile app marketing strategy, schedule a free demo with our consultants today!

« App-ily Ever After: Valentine’s Marketing
Top 10 Health and Fitness Apps for January 2021 »

Toon Blast: Spreading your App All Around the World