Blog Which Apps Benefited Most from the COVID19 Pandemic

Which Apps Benefited Most from the COVID19 Pandemic 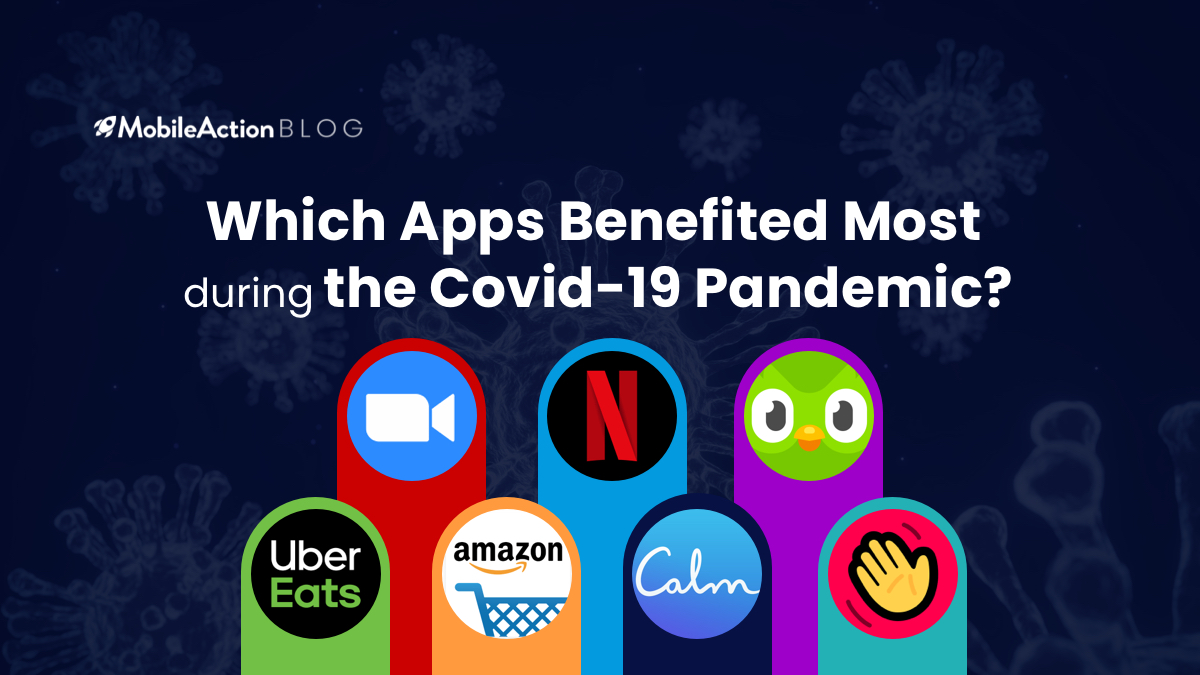 Does an app a day keep the doctor away? Probably not but the people downloading these apps seemed to think it was worth a shot! Here we have a list of apps that benefited the most from Covid19 and how they made the most out of a dire situation.

In our list of apps that did the best during COVID19, we have apps that spiked during the stay at home order as well as apps that stayed at the top charts despite the changing landscape of COVID19. Though there may not seem to be a huge change in some of these apps such as Amazon, Netflix, and Amazon Prime Video, if we use the example of Uber compared to Uber Eats we can see that indeed they did flourish during this time.

Here we see that Uber’s ride-sharing service has dropped during the pandemic, while UberEats Orders has spiked and UberEats Food Delivery has stayed relatively stable. Some of the most downloaded apps have this same pattern during the pandemic and can still be considered successful as they have maintained growth and chart rankings despite the drop in other businesses and tumultuous times.

With outdoor entertainment options dwindling and group meetings banned, it is no surprise that entertainment apps boomed during the COVID19. These apps either provide you with escapism, human interaction, or a bit of both. Netflix and Amazon, for example, gave people other worlds to dive into while HouseParty, Among Us, and other online games gave us the virtual world to dive into plus added interaction. YouTube and Tiktok also let people produce their content, giving people a way to feel seen and heard in a time when we were barely able to go to the grocery store. This year has also introduced many new people to the best mobile games. Lots of mobile users who did not play games before the pandemic have since started to, and will perhaps continue to, now that they have experienced it.

These apps all did well this year despite the Pandemic. The two creator Apps did especially well.

Food delivery, grocery delivery, and boxes on boxes of weird stress purchases from late-night online shopping. Both the apps that helped with making necessary purchases and those made to indulge, saw a spike during the lockdowns.

Walmart, Target, and Amazon are among the top apps in the shopping category. All three have experienced growth during the pandemic. These apps allow for grocery delivery as well as other shopping items that people may have been, missing out on during their time at home.

DoorDash and Uber Eats stayed active throughout the year. Though, like with the shopping apps, we see a dip right around the beginning of the stay at home order in March.

When placed together on one chart we can see a dip before the climb in all of these apps right around the same time in March. This could be because of people’s fears of contact and the hiccups in contactless delivery at the beginning of the lockdowns.

After the initial dip, these apps became invaluable to people during their time in quarantine.

When comparing February to March on the US most downloaded shopping apps, Walmart has jumped up to second place and Target which was not even in the top 10 is now in 5th place.

Why has Walmart made this jump? Walmart changed its marketing strategy to adapt to the lockdowns

Now emphasizing online grocery shopping, home delivery, and curbside pickup features. These are all aspects that would have become increasingly popular during the lockdown. Previously, groceries were an afterthought within the app, but now they are front and center.

Their creatives also include people wearing masks and doing their grocery shopping.

Health and Fitness Apps Benefited from the COVID19 Pandemic

In the domain of mental health which apps benefited most from the COVID19 Pandemic? Calm and Headspace for Meditation and Better Help and Talkspace for online therapy. Mental health has been a priority for people having to deal with the anxiety surrounding this year. Especially since our regular support networks of friends and family may also be locked down elsewhere.

As far as meditation apps go, Calm and Headspace are at the top. They were definitely not slowed by the pandemic. Considering their growing popularity and some of their creatives and reviews they had to be considered.

Both apps have experienced success during the pandemic but they seem to follow their trends for this year. There is a defined climb for calm during lockdown but not as dramatic as the climb in some other categories.

A brief ad analysis shows us something different that Calm did during the shelter in place order. Unlike the shopping apps, Calm avoided directly referencing the pandemic all together. This could be because they are trying to create a calm environment for their users. These creatives from March, directly reference the problem instead of the external causes. There are mentions of not being able to sleep or suffering from anxiety or depression. Then, calm as a solution.

The creatives from February, before the lockdowns hit the US, focus more on just sleep and how efficient the app is at getting people to fall asleep. By marketing itself as one of the best apps for anxiety, Calm was able to avoid directly talking about the pandemic while still getting that customer base.

There are very few direct references to COVID19 or Corona within the reviews. People leaving reviews tend to write things like “especially now” or “these days” so it is hard to identify which reviews are referencing the pandemic. But from context, we can see that at least a few users have downloaded the app for this purpose.

Though Calm has avoided directly targeting the Covid situation, they have managed to grow a lot throughout the year. Their users are expressing that it has helped them through these times.

Aside from mental health, people have also wanted to focus on their physical wellbeing during the lockdown. Life at home from couch to couch can be quite stagnant and it’s important to stay active. With the closure of gyms, at-home workouts have also experienced success during the quarantine. Lots of step counting apps and at-home workout apps have experienced success this year.

Fitness Coach, 30 Day Fitness, and MyFitnessPal all saw a spike in activity in March, though MyFitnessPal is more gradual and sustained.

Then, Planet Fitness slowly started to beat out 30 Day Fitness. After the first wave, was even giving Fitness Coach a run for their money. Overall, Fitness Coach is the Fitness app KIng of Quarantine, being more popular by far than its competitors during the lockdown months.

During the lockdown, at-home fitness became more and more important for fitness apps. Even if they offered workouts that could be done at home beforehand, it became important for them to include these terms in their keywords and metadata during the stay at home order. It could be because of their use of ASO that people deemed Fitness Coach to be one of the best apps to download for at-home workouts.

Many schools have closed for much of the pandemic. Thusly, we have to consider learning apps when we examine which apps benefited most from the COVID19 Pandemic. In March, google classroom grew tremendously and has been beating out all other apps for the top spot in Learning Apps since.

Duolingo and Google Classroom have both been quite popular since the pandemic started. They also have an inverse relationship with each other. This indicates that people want to learn a language outside of school so they use Duolingo more on Holidays and Weekends.

Aside from apps in the educational category, Pinterest did very well this year.

There is quite a spike and then some steady growth starting in late March and continuing throughout this year.

Whether or not this had anything to do with the Banana Bread craze at the beginning of lockdown, the keyword bread is highly searched and has a pretty good average rating.

A special mention should also go out to productivity apps. People around the world used them in tandem with learning apps in school and at work alike. All of the google workspace apps did incredibly well.

The top social media apps have for the most part remained as such. However, without being able to visit friends in person, the need for live interaction both business and otherwise has become increasingly important. Google Meet, Zoom, and Skype are included in the mix. The apps have been crucial for meetings and online classrooms. Houseparty, a social networking app made to play games and socialize with friends during the pandemic. This app also had a huge spike at the beginning of March.

Finally, Among Us experienced a huge amount of success later on in the year. This app is also one that allows you to socialize via a game with your friends or with strangers. Houseparty is also a video chat app. People often play Among us in tandem with video chat apps to be able to experience friends’ reactions. These are the apps that experienced the most defined and intense lockdown growth.

SO, which Apps Benefited Most from the COVID19 Pandemic? Zoom and the Fitness app genre in general were the biggest standouts during the COVID lockdown period. If you would like to look further into one specific app or see for yourself what strategies these apps used. Take advantage of this dire situation, sign up for a demo with us, and take a closer look.

« Localization Just Became Easier with our New Translation Module!
Seasonal Marketing for the App Store: How to Boost Installs »

How to Create Better Games with Ad Intelligence