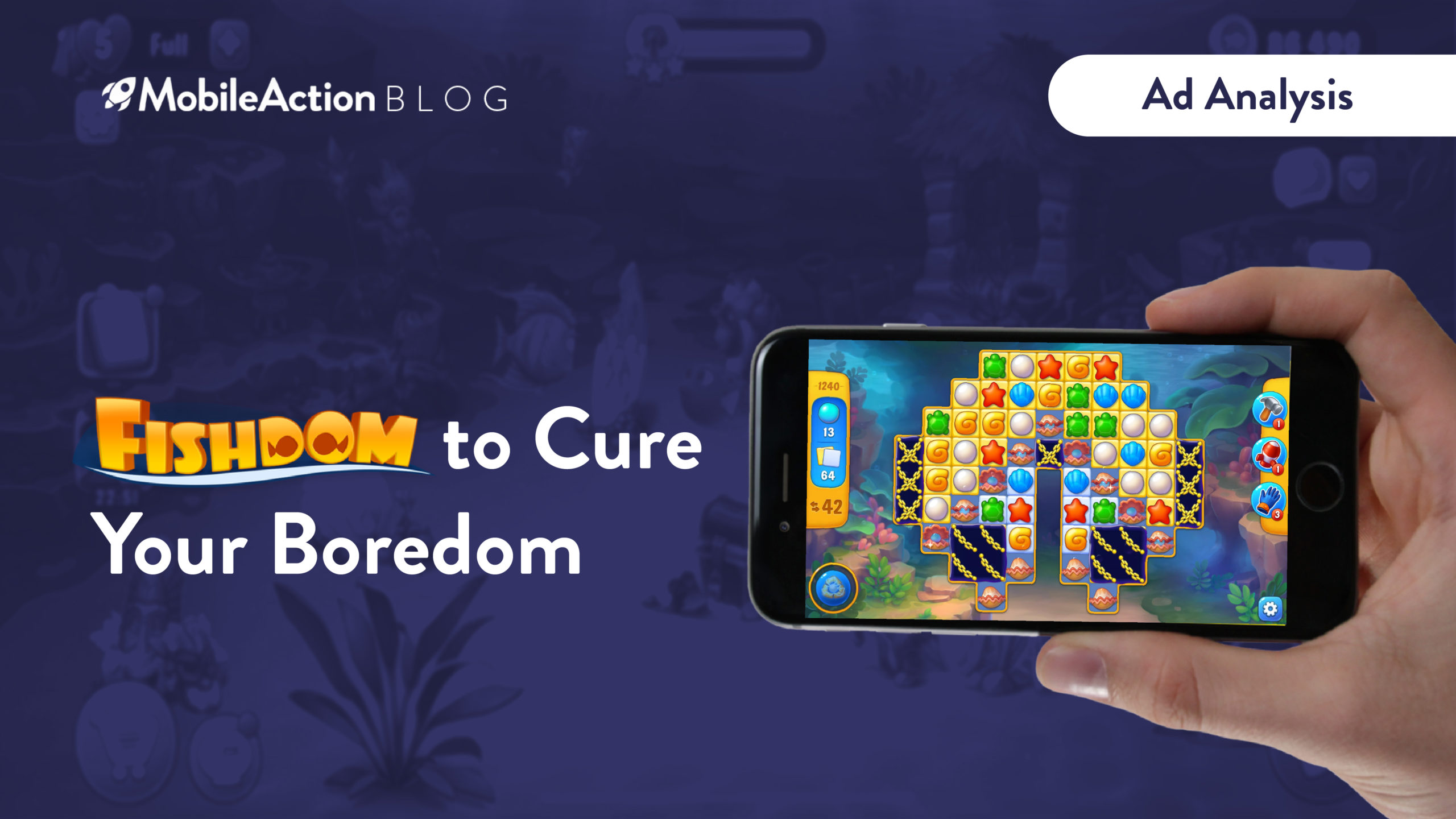 With coronavirus, people have been stuck at home. The new normal is online work and school but even with that, there’s still a lot of spare time left. As a generation, we were already glued to our phones but when you are indoors literally 24/7 there is not much else to do anyway. So, entertainment and game apps are on the rise, naturally.

As the interest in games are going up rapidly, some games are becoming more prominent than the others. We have looked more into detail to one of the Top Game apps, to see what kinda strategies they’re taking on during this long quarantine period to acquire more users.

Let’s take a closer look at Fishdom’s ad strategy, a game coming from, Playrix who created successful games such as  Homescapes and Gardenscapes.

In the App Store, the game rose from 31st to 4th in overall Games in the past month, and 51st to 17th in overall apps for the USA.

And in the Google Play Store we see growth again, the game rose from 20th to 13th in Games in the past month, and 45th to 32nd in overall apps in the USA.

For the last month, Fishdom is one of the top advertisers in all countries, ranking at 6th for the App Store and 22nd for Google Play Store from March 30th to April 5th.

Now, let’s take a closer look at the specific campaign metrics of Fishdom to deepen our analysis of their paid user acquisition strategy.

Campaign Analysis shows us insights like which ad networks Fishdom is using for their creatives, what kind of creatives they are using and if they are localized or not.

As they’re number 6th in overall advertising in iOS right now, let’s take a further look into their ad strategy to understand how they’ve achieved this.

Above is a snapshot of the main campaign metrics from Fishdom’s iOS app.

This app is both “running ads” and  “publishing ads.” which gives chance to this app being more visible and increasing the share.

We can see that it is active in 13 ad networks, and is determined in getting downloads from in-app ads, more than some of the other apps out there. A good chunk of that is occupied by Facebook, followed up by Mopub, Vungle, Unity, and Ironsource are all taking up more than 7% each. Its total ad publisher count is 2,505. And out of its total 977 creatives, 409 are active. The creatives are mostly in image and video format, similar to other game apps, as videos give the users a sense of playing the game and therefore is eye-catching for apps like Fishdom. It has a share of playable too, at 1.8%.

Similar to Google Play Store, it is active with 12 ad networks and again, Facebook takes up a considerable share of total percentages.

The distribution share of the impression percentage received for the last month of fishdom, the Ad Networks utilized and the Countries being targeted by this app can be found below.

As we can see, fishdom is being distributed on top ad networks and in many countries.  Not only is it targets the USA, but it is also quite active in Europe and Asia, which shows that they spent a considerable effort into localization.

We can also see the efforts of localization when we look at the list of the countries their ads are available in, this is listed in order of which country the ads appear in most.

In the App Store, the US takes up the most share, but when we look over to right and see which languages are utilized in their creatives we can see that Spanish, German, French and Russian are also available.

Over on the Google Play Store localization seems more diverse, with 8 languages as seen in the language pie chart.

Top Creatives of Fishdom in iOS and Google Play Store

When we go over to the Top Creatives tab from our Ad Intelligence tool, we can choose to filter out by app category or even more specific a certain app title. We did this for Fishdom to take a look at its top creatives. Above you see the top 6 based on their impression scores. We can see two videos and two playable for the App Store, and we know that videos and playable are often preferred for game apps as it gives a feeling of real gameplay.

Here’s an example of one of its top playable creatives. As you can see too, it gives the feeling of playing it yourself which is what you’d want from a playable ad. You can also see here the title along with its impression share contributions for it. If you go down you can see which apps the ad appears in and their shares.

Over on Google Play store, we see more image creatives but there are still some videos too. The images have titles like “design”, “decorate” and “help them”.

Let’s take a look at one of the image creatives to see how they’ve arranged the titles in the Google Play Store.

Here we can see that they’ve tried three different titles and subtitles for this one creative and we can also see their impression share contributions. We can see which countries these titles are used in too and what the ad network is.

What to Take Away from Fishdom’s Ad Strategy

Fishdom is made by Playrix, which has multiple other games successful in ad strategies like Gardanscapes, Homescapes, and Township.

All of their games have a high impression score and ads play a big part in achieving that. To keep at the top of the charts and reach a variety of users and downloads it is important to keep up with trends and be constant with ad strategies.

We hope you enjoyed this blog post about Fishdom’s ad strategy. Let us know your opinions in the comments and don’t forget to subscribe to our newsletter for more actionable insights.

Interested in seeing more about Playrix and other big publisher’s ad strategies? Check out Campaign Analysis to find insights about user acquisition strategy for any app. Or schedule a demo to let us show you more insights about the in-app ads world.