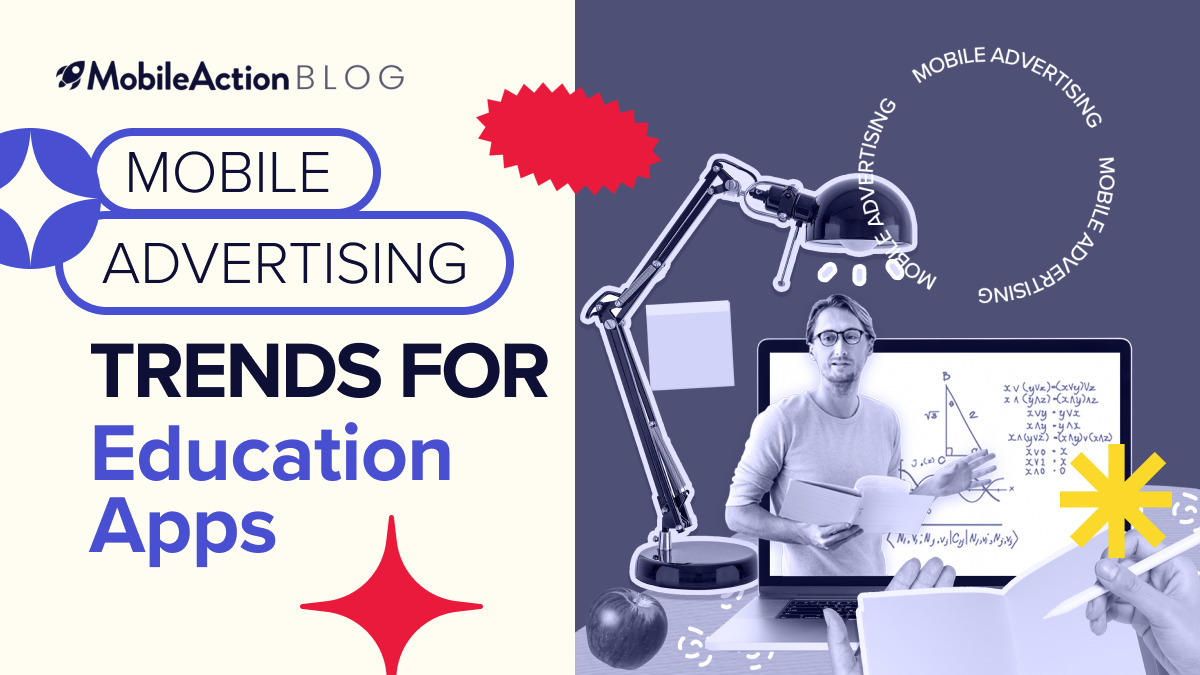 With over half-million apps ranking under the keyword of Education, building an effective paid user acquisition strategy is crucial for growing your app. And if you don’t know what kind of audience you talk to, what they need, and how you can convince them to choose your product over your competitors, you cannot create a successful mobile advertising strategy that will help you to reach your user acquisition goals.

Today, we are going to shed some light on mobile advertising trends for Education apps for the purpose of helping you create catchy and engaging ad creatives while also touching on the top-performing UA channels for education apps.

Previously while we were analyzing mobile advertising trends for Hyper-Casual games, we chose 7 games each from top hyper-casual publishers. This time, we’ll utilize the top 20 advertisers of both app stores to comprehend the dynamics of app stores better.

PS: The Dataset represents the general situation in the app stores for December 2021 and advertisers are ranked by the total impressions they get throughout this period. The source for all the data is our Ad Intelligence tool.

As you can see, we have apps that found a place for themselves in both stores’ Top Advertisers list. However, their rankings vary. Therefore we can see that apps have different approaches for the App Store and Google Play. For instance, while ABCmouse.com is the second most advertising app in the App Store, they ranked 19th in Google Play.

Now we are set to begin our advertising trends journey for Education apps.

Moreover, we can see how the strategies of education apps differ from App Store to Google Play when we look at it on an app-by-app basis.

Apple Search Ads became the fastest growing ad network of 2021 and is also quite popular amongst Education apps.

Alongside Apple Search Ads which is exclusive for the App Store, Facebook, Unity, and Admob appear as the most popular ad networks for Education apps.

When we look at the ad format preference of the top 20 advertisers in the education category, we see that they have a more balanced distribution for ad formats in Google Play but in the App Store, the Html format is by far the most popular one.

In this section, we are going to analyze paid user acquisition strategies of three apps from December 2021’s top advertisers list for the education category. Because as mentioned, cumulative data of top advertisers might be misleading. As there are apps from several categories such as language, music, education, and self-growth. So you should always dive a little deeper and directly collect data from your top competitors.

Where there is MobileAction, there is a solution.

So, let’s start with LingoKids.

Lingokids is utilizing gamification elements to provide a better learning experience for its users, just like many apps do so.

We touched on the subject of Gamification in our previous post. Gamification is a highly popular technique among apps, given that it’s improving retention and user acquisition considerably.

As mentioned above, Lingokids is one of the most advertising education apps, especially in the App Store. They are utilizing thousands of mobile ad creatives to reach out to relevant users.

As you can see above, Lingokids preferred Admob for %96 of their ad creatives and distributed the rest among other Ad Networks such as Facebook, Instagram, and Adcolony.

However, the journey of ad creatives alters a little bit in the hands of DSPs since they prefer distributing ad creatives to more profitable channels depending on market conditions. For instance, Admob ran %86 of the ad creatives sent by Lingokids on its platform and distributed the %14 to Unity. With our Campaign Analysis tool, you can track your mobile ad creatives journey and optimize your Ad Networks.

Now, let’s take a look at their top-performing ad creatives.

Learning a language can be difficult. You need to have a good vocabulary to understand the language and a good understanding of the grammar to produce your own sentences and speak with ease. And lots of practice, of course.

Lingokids offers mini-games and animations to make English learning more engaging. Moreover, when you can visualize the meaning of the word instead of just memorizing it, you can remember and learn more easily. In this ad creative, Lingokids showcase these value propositions to attract users.

Here is another example. The same approach, however, Lingkids utilizes a different set of visuals for this one. You may forget an animated cat video but a baby as cute as this one? This one may be a little more catchy.

It’s always beneficial to diversify and A/B test your creative assets. You may never know which idea will work better if you don’t test them.

Lingokids utilized 3336 paid keywords for the United States in the last week of December 2021. Although the number of paid keywords is pretty high, their Apple Search Ads visibility score remains 66 which is a decent score but can be better.

As you can see, we set the search for keywords with 30 or more popularity scores and sorted from highest impression share to lowest.

They are getting impressive impression shares for their own brand keywords and are also organically ranking in the first place. Although they rank organically first, they still run ads to protect their brand name.

Headway: Self-Growth Challenge is an app that pushes you to be better. It feeds you with beneficial insights into the world’s best personal growth books and enables you to grow mentally and personally.

As you know, personal growth is one of the most significant aspects of our century and this is why we have more billionaire mindset pages on Instagram than actual billionaires. This may be the reason why Headway is utilizing social media channels in 99% of their Ad networks.

On these ad network platforms, they ran 1307 ad creatives in total to engage new users. But these are just numbers, let’s check some of these ad creatives to see their approach.

Headway localized this ad creative to engage better with Spanish-speaking users. When we take a look at the countries they get the most impressions from, we see that this Spanish localization was a good choice.

As you can see, the United States and Mexico are the countries that heavily harbor Spanish-speaking people. And these locations also generated a quarter of the impressions for Headway’s mobile ad creatives. Therefore, ad creatives with Spanish content would have attracted fruitful users.

In this video ad creative, Headway showcases its features and how users can interact with the app. They might have decided to alter the background or the sound to make the video more catchy. As you know, you have a very limited amount of time to attract users. This is why you should focus on creating a great first impression by harmonizing sound, visuals, and CTA’s.

Headway ran 2509 paid keywords in the second week of December 2021. However, they have failed to get sufficient impressions for keywords with high search volume.

Here, we have a similar case to Apple Search Ads Strategies of Lingokids. They defended their own brand keywords but couldn’t do the same for generic or competitors’ keywords.

As you can see, “Motivation” has a pretty high search score. However, Headway didn’t bid on this keyword even though Headway offers motivational features.

Kiddopia is an education app that offers play-based learning activities for kids. The app features several classes such as math, language, and self-expression to support the growing phase of kids.

But let’s see how they built their marketing strategies to support their app growth.

Unlike Headway, Kiddopia preferred Admob, Ironsource, and Unity instead of social media channels. Based on Admob’s and Liftoff’s behavior here, we can speculate that Kiddopia could have increased Mopub’s, Ironsource, and Admob’s share for better results. Because these channels were more profitable and therefore could have supported Kiddopia’s goals better.

This video was one of the top ad creatives of Kiddoppia. Snowy backgrounds and Christmas elements are utilized to create this visually engaging and seasonal ad creative. Meaning that Kiddopia applies seasonal app marketing and adjusts their ad creatives to the season to engage better with the users.

Moreover, they redesigned their app icons and screenshots to fit better with the season. And, you can utilize our App Update Timeline tool to learn more about your competitors’ updates.

Above you see Kiddopia’s Apple Search Ads scores in the second week of December 2021. They ran nearly a thousand paid keywords and had a Search Ads visibility score of 67.

These are the most popular keywords that Kiddopia was bidding on. As seen, most of them are about the brand keyword of Toca Life. Their brand keyword is searched so often that our Search Ads popularity metric gave a 76 score. If you take a closer look at the screenshot above, you’ll see that even TikTok was bidding on their keyword for getting impressions.

Bidding on your competitors’ keywords is important because you widen your reach when you do so. A user might have seen an ad creative of a certain app and made a search utilizing its brand keyword. When you bid the right amount for their keyword, your app will appear before and you can steal that user.  So, in a way, you benefit from their marketing efforts. Wouldn’t you want that?

With SearchAds.com, you can get insights about bid levels, the popularity of keywords and utilize our automation tools to save time. Especially for more competitive keywords, automation workflows can be utilized to increase your impression share.

We hope our research on mobile advertising trends for education apps will be helpful for your mobile user acquisition efforts. If you want to learn more and take your app marketing game to the next level, schedule a demo with our experts now!

« Top 10 Advertising Travel Apps in the U.S for December 2021
How to Monetize an App: Latest Trends for App Developers »