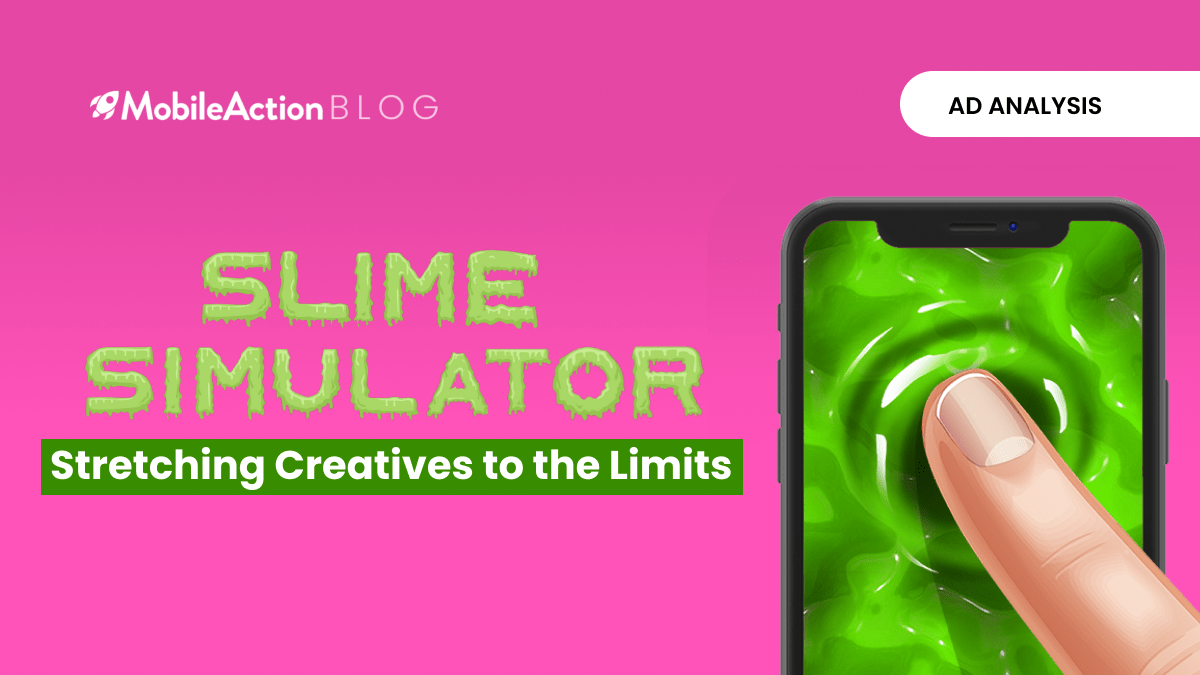 Slime Simulator offers what the name suggests. A simulation of slime and other ASMR aspects on the mobile phone. This sticky app is 47th overall in advertising. The game has some interesting advertising tactics. One of which is that it is categorized under the Lifestyle category, despite the fact that it has “Game” in its app store title.

Let’s delve into what this game did to achieve its impressive number of downloads and what creative strategies you can apply to your own games.

Slime Simulator, as previously mentioned, holds the 47th spot for Overall Advertising. What is this advertising strategy exactly? Let’s look at this with our ad intelligence tool to see what we can learn.

If we compare them to someone like Homescapes, who alternates with Top War: Battle Game for the spot of First in Advertising. Homescapes uses all available Ad Networks for their creatives

They also put much more of their focus on Html ads than images, videos, or playable ads. This app instead focuses on a smaller group of networks, and mostly uses video ads.

The app is being advertised pretty evenly on a global scale. There is a larger percentage put towards the US according to our mobile ad intelligence.

The creatives for Slime Simulator all follow the same format: photos and videos of the slime coming out of the phone and into the real world. As we saw previously, there are only 77 unique creatives. So how is their marketing strategy so effective?

Most of them are videos, and some are pictures like this. Many have a caption but others just display the same image of the hand entering into various types of slime.

We can see that these creatives are being shown almost all over the world.

This app is very well globalized despite most of its creatives being in English. This, included with the limited number of individual creatives can be because of the strong imagery of the ads.

How to Peak Curiosity in Viewers:

Sparking curiosity in viewers is one very effective way to get them to click on something. The theory of the information-gap states that a gap in knowledge will make people take action to find out what they want to know.

In 2014, Copyhackers ran an A/B test that revealed an interesting result. Making use of something called the curiosity gap led to a 927% increase in clicks on their pricing page. This can also be applied as a user acquisition strategy for apps. The ads create curiosity with their surreal imagery which makes the user extremely curious and inclined towards downloading the app.

This could play into why Slime Simulator’s creatives are proving to be such a success. Their surreal quality of the slime coming out of the screen makes you think “This can not literally be what the game is, but now I must see for myself”

Slime is… a Lifestyle?

So, why has this game chosen a lifestyle category rather than the category aptly named “games”? Well, this may be another part of their marketing strategy.

This difference in category suggests that they experience better conversion rates in the Lifestyle category. The game category is highly saturated, so this may be a strategy to achieve a higher category ranking. Though this is not a recommendation in terms of what you, personally should do with your app. Thinking outside of the box is always a good approach to take.

You should examine your own app. Examine your metrics and then get creative from there. Examining your competitors to try to do what works for them can be a very useful tool. However, it is also possible that in examining your competitors you will be able to see what they are not doing instead. This may show you some gaps in the market that you can target with your creative strategy.

So what can we learn from Slime Simulator’s unique creative strategy? Of course there is no one best way to advertise mobile app. However, we can learn from these top advertisers new and unique ways to do it.

You should compare your application to your competitors. From there you should find ways to refine your strategy. With the example of Slime Simulator, we can see that they were able to gain impressive results with many fewer unique creatives, by coming up with one strong creative concept.

You can market your app globally without translating to many different languages by focusing on the imagery in their creatives, which translates globally. Slime Simulator was able to incentivize people to click on their creative by making them intriguing and piquing curiosity. Finally, they were able to rise to the top of their category by placing their app somewhere with less competition.

If you would like to check out other top advertisers to learn from their creative campaigns, sign up for a demo.