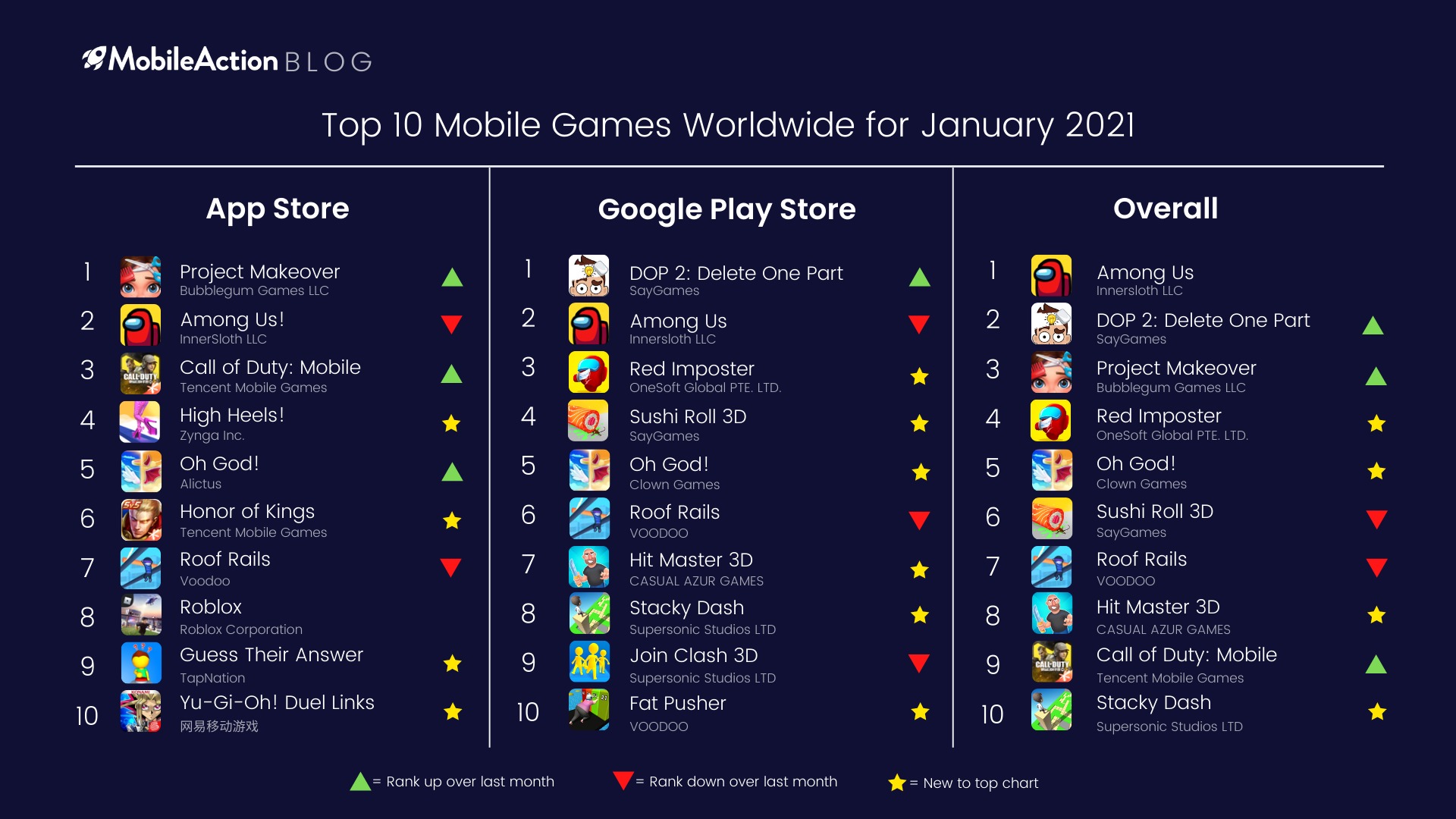 Another top 10 mobile game apps list ringing in the New Year! This cutthroat category always gives us interesting insights. This category is highly competitive and those able to rise to the top are usually employing exceptional ASO and creative strategies. Let’s take a look at the games that have been able to hang on as well as the games that have recently fought their way to the top.

The category rankings in the US for example, show that Among Us has held on to its top 10 mobile games status for about twice as long as Project Makeover has and that both have been clinging to the top for months now.

If we compare the chart to the November 2020 Top 10 Mobile Game Apps Worldwide list we can also see that Roof Rails has been able to keep a spot on this list as well. However, another noteworthy and interesting rise to app stardom we can talk about is DOP2: Delete One Part.

Controversy is the name of the game this month. Both DOP and Oh God! Have sparked a lot of conversation surrounding their debuts in 2021. This article has a section that breaks down the ad strategy of Oh God!: Ad Strategy: Apps and Publishers Who Started 2021 Strong. You can check out this post for a more detailed analysis of what Oh God! Has done, how their ads work and what the buzz surrounding it has done for the app. Therefore, let’s focus on the campaign strategy of Delete One Part.

Ad Intelligence Tool: how does it compare to others in the Top 10 Mobile Games

We can start by looking at the Ad Intelligence tool. This tool allows us to see the campaign metrics of DOP. The app is currently sitting at 521st overall in advertising.  Though this is still considerable, it is not as high as, for example, Roof Rails was back in November. This indicates that perhaps the app is leaning on some other aspects than just the quantity of their creatives. The suggestive nature of their creatives may be pushing them out to a wider audience organically.

They are advertising on 12 ad networks, favoring Facebook heavily with 30% of their ads appearing on that platform. Seeing as you can easily comment on and share Facebook ads, this may be a reason that this app has chosen this platform for the majority of their ads.

If we compare their Ad Publisher count to other successful apps, this theory is further fortified. Roof Rails had a count of 10,000, while Toon Blast had around 11,000 ad publishers… but DOP2? This app has around a third of this with only 3335.

On top of this, they have a relatively low total of 285 creatives, only 66 of which are active. Ads for the game are shown globally, but all of them are in English as of now. However, the ads tend to focus mostly on the visuals so it may not have been necessary to Localize the ads to a great extent.

To be Risky or not to be

So what are the Ads in question? Generally, they consist of a scene drawn in cartoon form that implies something scandalous, and when you erase part of the image, it shows something silly underneath. However, for several of these creatives, even once the implied thing is revealed to be something comical, the original message has already made an impact. The nature of the ads has started a conversation amongst users surrounding the age rating of the game. According to the reviews on the game, some have found that it is not appropriate. This can be a user acquisition strategy as parents and kids alike may want to download the game to investigate for themselves. They may feel the need to experience the app first-hand in order to take part in the discussion surrounding it.

This example is one with no subtext, but it provides a good example for the creative style.

As we can see, even in this small sample, people have downloaded the app to write a negative review. Though these reviews are negative, sparking a conversation around their creatives may have been a strategy to obtain organic advertising.

This app is also using Apple Search Ads and they are employing a very interesting strategy as far as this goes.

This is surprising, but it also points towards the fact that this app is riding the controversy as a success strategy. People searching for the app name in the store will find this application immediately. They have not deemed it necessary to include any other keywords in their Apple Search Ads strategy.

This January has been a particularly interesting month for the Top 10 Mobile Game Apps Worldwide.

DOP2 has a unique tactic, but it does pose some risk. For now, their use of creatives, combined with a very precise App Store Optimization strategy has allowed DOP2 to reach the top of its category with a relatively lower advertising cost. However, they are walking a fine line. It is also possible that it would have the opposite effect.

There are also many other effective advertising strategies through which apps can boost their growth and increase revenue. Schedule a demo with us and let us show you how MobileAction’s tools can be used to get ahead of the competition!