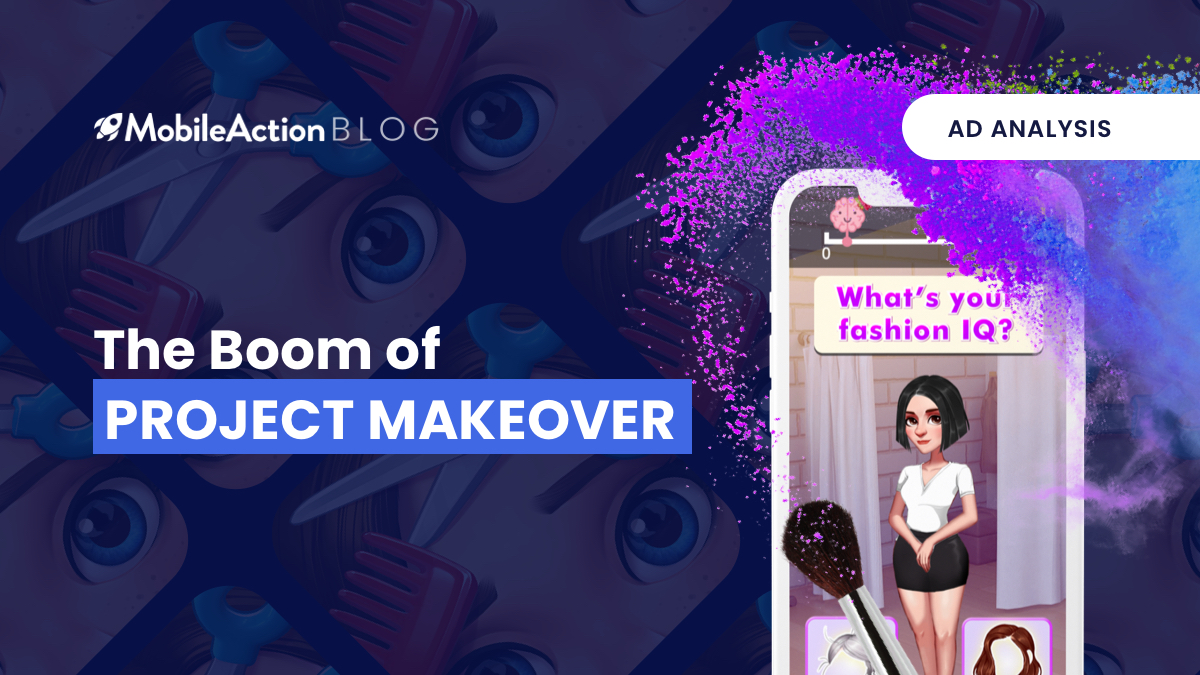 How fast can an app rise to the top of the lists? Project Makeover certainly pushed the limits on this aspect. Released in the middle of November 2020, it was the third most downloaded game worldwide in the Apple App Store and also third overall across both app stores. You can also check out our post about the top games of November 2020.

Project Makeover can be considered a puzzle game where you can give makeovers to people or even decorate their rooms. Published by Bubblegum Games LLC, it seems to be more than successful. Let’s take a more detailed look into the strategies used to acquire its user base. Welcome to the advertisement analysis of Project Makeover.

To illustrate what we mean by “rise to the top”, let’s take a quick look at Project Makeover’s Category Rankings.

When we look at Project Makeovers Category Rankings an interesting graph presents itself.

After its release on the 15th of November, the app became the top-ranking free game in just 4 days. This is very impressive. We can also see that the game has not given up its ranking since its release.

Reaching category rankings as high as Project Makeover in such a short amount of time requires serious amounts of downloads.

When we check the Top Apps tab of our Market Intelligence tool, we can see that Project Makeover is the third most downloaded game in the Apple App store for November 2020. Remember that the app was released on November 15. In under 15 days, it is estimated that they reached almost 12 million downloads which is mindblowing.

Through our Ad Intelligence tool, we can take a look at the metrics of Project Makeover’s advertisement strategy. Project makeover is the 52nd in the overall advertisers ranking.

They are using 8 ad networks to display their creatives. This is a competitive number for the category even though it is less than a similar app, Shortcut Run, which uses almost 9000 apps to publish its creatives.

When we look at their localization efforts, we can see that they are rather evenly distributed across countries even though the US seems to take a slightly bigger portion compared to others. Interestingly 7% of their promotion material is in German and 1% is in Danish. Perhaps they could be experimenting with localized creatives to see if they get reasonable returns. If these experiments yield positive results, maybe the app can increase its localized creative efforts.

They are using 457 active creatives out of 802 total creatives. We can take a closer look at some of these creatives through the Top Creatives tool.

As can be seen in the campaign analysis, Project Makeover mostly uses video creatives. This way they display the UI and play style of the game. For image type creatives, we can see that they are using different subtitles.

This can mean that they are actively experimenting with keywords and employing those which are proven to be effective. If we take a closer look at their creatives, we can see that they are using creatives that display different aspects of the game.

These three creatives create a great example of diversification. As you can see, three very different aspects of the game are presented. The creative on the left demonstrates an interface that we are familiar with from classic “bubble popping” games. In the middle, a house renovation related image appears.

Finally, on the far right, we can see a creative that is actually about makeover. This kind of diversification can be useful in increasing your reach. By demonstrating different parts of the game, you might be able to capture the attention of people with differing interests.

If we take a quick look at one of their playable creatives, it is easier to understand how users get hooked up in this game. Very bright colors paired with a simple user interface makes users crave more of this game.

Also, the shiny and motivating response following our choice is another key factor. The human brain loves having instant feedback and this game provides us with what we need.

Developing a successful app in the gaming category might appear as being more difficult compared to some other categories. This is partially true. Big publishing companies with large budgets pursue aggressive advertising campaigns in order to maximize their revenue.

Project Makeover game has once again proven that you can indeed rock the lists with a good idea and a creative strategy in advertising.

Through our localization and creative analysis we have also seen that the game is continuously experimenting with its creative strategy. Using different languages and publishing the same creatives with many different subtitles are just two examples. This is indeed the way to grow your app. Experimentation and optimization.

With the right toolbox, the chances of growing your app increases significantly. Let us guide you through the journey of growth with our expertise and world-class products. If you want to learn more about Mobile Action’s Intelligence tools, schedule a demo with us today!