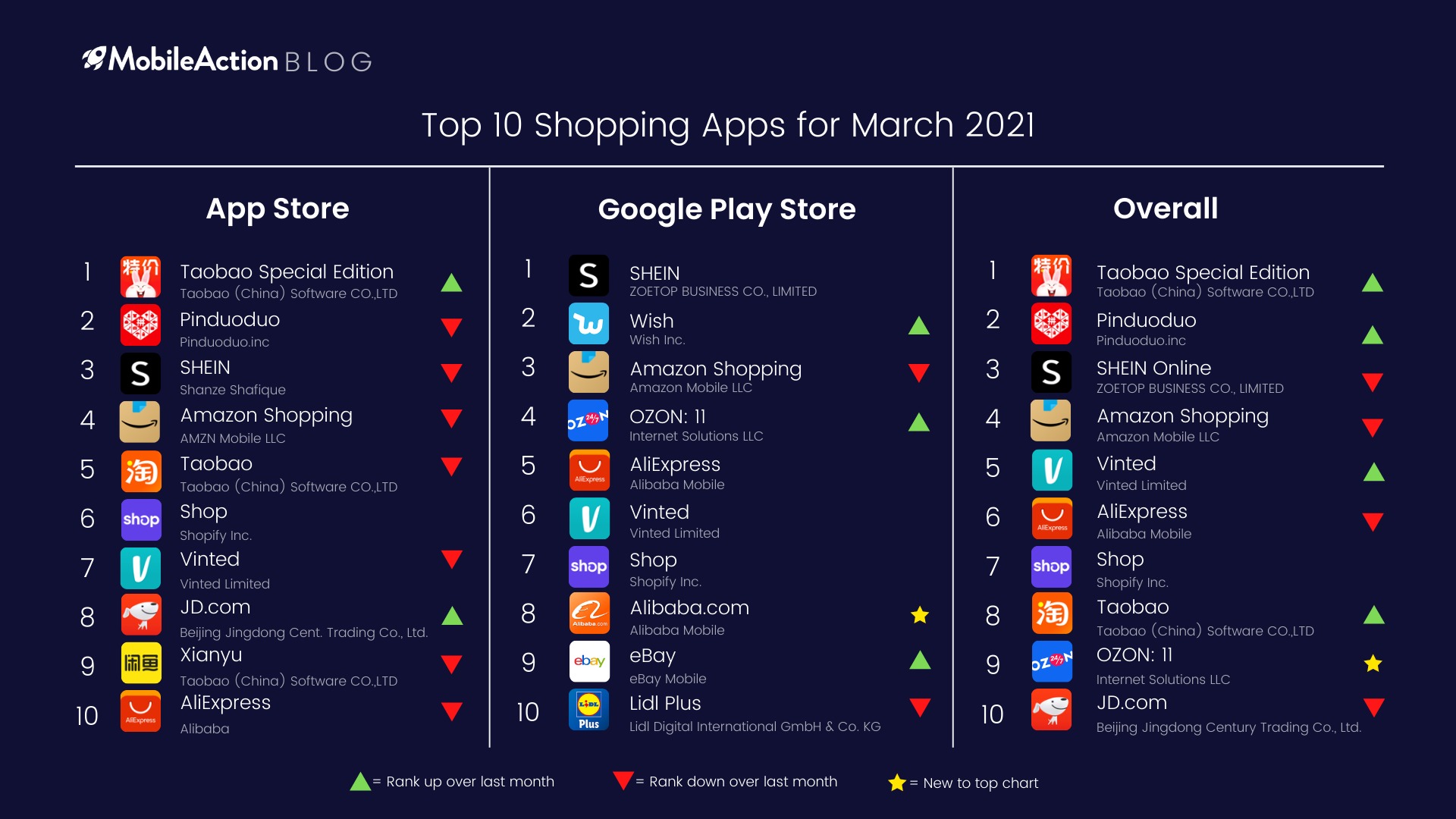 Ever since COVID, online shopping apps have increased in popularity. The top 10 Shopping Apps Worldwide in March of 2021 show that there has also been an increase in Chinese shopping apps these last couple of months.

The Amazon Shopping app, which is not available in China, has forfeited its place, as have several of the other apps in the App Store. The Play Store has remained a little more stable. Some Russian shopping apps have also entered the scene.

Let’s take a look at the best shopping apps this past month to see if we can learn anything about their success. Maybe we can apply something to our own app marketing strategy.

This month, the Chinese shopping apps have continued to have huge increases in downloads leaving Amazon and SHEIN at almost half the downloads. The top app has doubled in estimated average downloads since last month. This boom in shopping app users also extends to other shopping apps.

However, for those who do not have an available app in China, they have experienced a rough month. This has been particularly bad for Amazon as the app is not available in China.

Of course, Amazon is still a shopping giant and remains at fourth place in the top 10, but SHEIN and Wish are giving it a run for its money.

If we look at the US App Store, Amazon and SHEIN look pretty stable. The two are experiencing similar peaks and valleys in category rankings at the same times more or less.

However, if we look into SHEIN’s category rankings in the US versus China we can see that this year they have been steadily increasing in their category. This shows that they will soon reach the same status in China as they have in the US.

SHEIN China category rankings are impressive. Keep in mind that they should not be seen as a direct competitor to Amazon. The two shopping apps serve different functions. SHEIN is mostly a women’s affordable fashion application where Amazon sells a very wide variety of things. Therefore we cannot say that Amazon’s absence in the Chinese App Store contributed to their success. We are merely using it as a reference point to compare the App’s growth to.

SHEIN and Wish are both at the tops of the shopping category in the US. We can see here that though over the past month Wish has seen a slight increase in Chinese users, SHEIN has managed a much steadier incline in usership.

Let’s take a look at SHEIN’s app advertising strategy. How are they consistently climbing higher and higher globally and especially in China along with the other tol shopping apps.

As far as advertising strategies go, SHIEN’s is fairly simple. They advertise a desirable product at a desirable price and show the ad to a lot of people. The app has an impressive visibility score of 86 and overall very good ratings.

SHEIN is 92nd overall in advertising. The app advertises on 11 as mobile ad networks. The app favors Facebook and Instagram as their predominant locations of advertising.

With over 4,000 active creatives and nearly 16,000 creatives total, the app is making sure to reach as many potential users as possible.

Mexico, Saudi Arabia and the United states have the most ads running, but SHEIN has creatives running all over the world.

Their creatives usually feature an article of clothing on a model, with a light backdrop and at a price. SHEIN refers to itself as an affordable shopping app, and they often promote sales discounts and deals additionally to these standard creatives.

Many of the creatives focus on having their models being representative of real people. In addition to the pale backgrounds showing off the clothes, they often are also set within someone’s house, or daily life, demonstrating that they are accessible.

They also have a series of creatives featuring pets with this green background. This is part of their campaign for pets clothing.

Most of their creatives feature little to no writing or speaking, this way the creatives remain accessible to people speaking many different languages across many countries. They can of course localize as well, but they don’t necessarily need to localize the language used on the creative itself.

If you want to keep up with the growth of SHEIN or any other app, sign up for a demo and see what creatives they are running.

« Crypto.com: Winning the Market Amid Bitcoin Craze
Best Social Networking Apps to Keep an Eye On in 2021 »