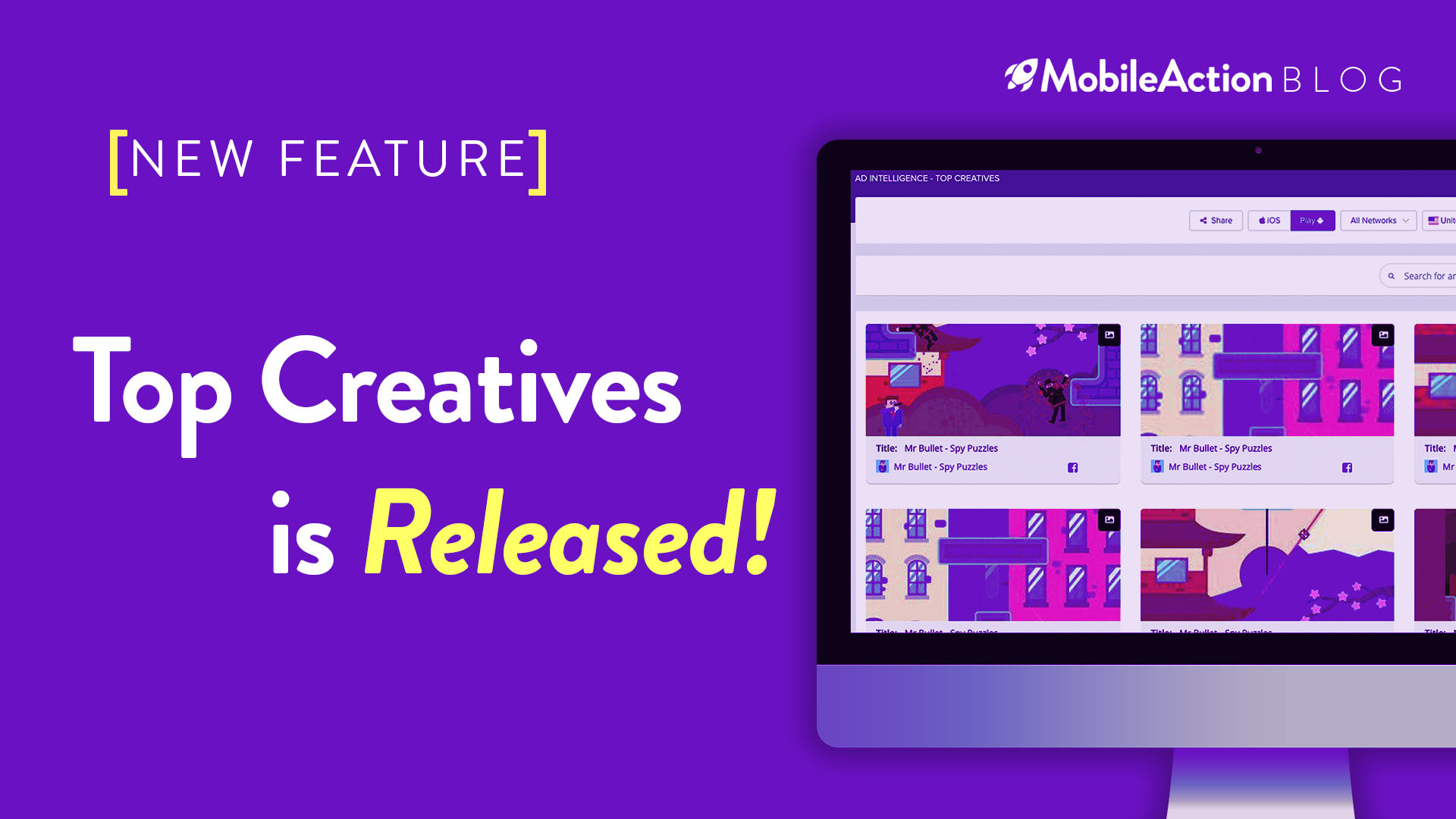 Competition in the ad world is fierce! Keeping up with the newest trends requires constant analysis and iteration. Yet, analyzing millions of ads can be very tiring especially if you have a mobile game where the competition gets crazy! That’s precisely the reason we keep updating our Ad Intelligence product – to ease your pain in user acquisition and make it fun.

Knowing that ad intelligence plays a crucial role in the success of advertisers, here we are with a brand new update: Top Creatives helps you discover the latest trends in the ads and to craft better strategies for your own ads.

Let’s suppose you have a game on Google Play Store – say a puzzle game that you would like to start an ad campaign for the users in the U.S. What should be your first move? You would probably gather some intelligence on how competitors are designing their ad campaigns, right? You can check each and every competitor’s creatives manually, but time is valuable. So better to work smart than work hard. And the best way to work smart would be checking the Top Advertisers first to see the most successful advertisers in your category.

The chart above shows the top advertisers of the Game-Puzzle category for Play Store in the U.S in October 2019 based on the number of impressions. Although our job has been simplified a little, it would be a wiser move to check the details of this chart before starting the deep analysis of the creatives of any app.

This table from Top Advertisers tool shows the details about the top 10 advertisers in the above graph. The advertisers are sorted based on the impression scores. Itching to analyze the apps of Peak Games which took the first and the third spots? Hold on yet! Surely, you should look into them on a deeper level later, but we’re playing smart here, right? 🙂 So, let’s suppress the urge and keep on looking.

So, which app to choose then?

See the app of Lion Studios on the second spot: Mr Bullet – Spy Puzzles? Among the top 5 apps, Mr Bullet runs ads on 5 ad networks, which is a lower number than that of Toon Blast, Merge Magic, and Merge Dragons. And among the top 3 apps, it has the lowest creative count. Hence, the fact that Mr Bullet ranks second on the list may have something to do with its creatives, which deserve a thorough examining 🙂

Since we have decided on the app, let’s first see its app campaign metrics on the high level.

Mr Bullet seems to be using mainly Facebook SDK as its ad network along with Applovin, Unity, and Ironsource. 59% of its ads are available in the U.S. And its total creative count is 401, which is an average number. 214 of its 401 creatives are active currently, which indicates a very efficient use of ads compared to most of the top advertisers in the Game-Puzzle category.

The publisher count which shows the total number of apps publishing the ads of Mr Bullet is 4900, which is slightly above average. Finally, the bar chart called “Creative” shows the distribution of different ad types of Mr Bullet. As expected, videos comprise a large part (55%) of ads as showing the UI of the game always works better. But do you know what works even better? Letting the users experience it by using playable ads, and 12% is a high and successful number for this category 🙂

Now, it’s time to delve deeper into the creatives! You can continue to use Campaign Analysis to analyze the creatives. But if you’re conducting an analysis in a time window, you should check the creatives, using Top Creatives tool.

As shown in the video above, we first select the store: iOS or Android. Then, we move on to country selection and set the time window. Lastly, we search for our app in the search bar below. The creatives appearing are the active ones in the month of October and sorted based on impression score (from the highest to the lowest). We haven’t chosen a specific network, but as most of the ads are on Facebook, the ones with the highest impression score came out to be Facebook ads.

Now that you have everything you need, all that is left is to analyze these creatives by clicking on them. When we click on the first creative on the list above, a pop-up like the one below comes out:

Apart from the basic information about the creative such as its type and properties, you can find other types of data such as the title and the subtitle used for that creative. The best part is that you’ll see the percentage share of the impression for each title and subtitle and the countries contributing to that. For example, the first one in the list got 85.94% of the total impressions. When you click on the country name, you’ll see all the countries besides the one you chose. At the bottom of the pop-up, you can see all the apps publishing this ad.

If you’re the type who likes to break down the data into smaller parts for better analysis, hit on “Export as zip” button. Everything visualized above will come as a bunch of categorized CSV files 🙂

Let us remind you again that you can watch the videos and play the playable ads just as you do in the Campaign Analysis:

Other than spying on your competitors’ creatives, Top Creatives has many other uses. Wondering about the trending apps in a store or in any ad network? Curious to see the ads with the highest impression in a storefront? You can find all the answers to those questions, using Top Creatives.

We believe Top Creatives is going to be an invaluable step in your ad strategy building process. Hope our article will be useful on how to use this new tool for your analysis. We’ll come up with new updates soon. But in the meantime, check out the Top Creatives in Ad Intelligence here to discover millions of creatives.

Interested in our Ad Intelligence product? Schedule a demo with us to try all the features!