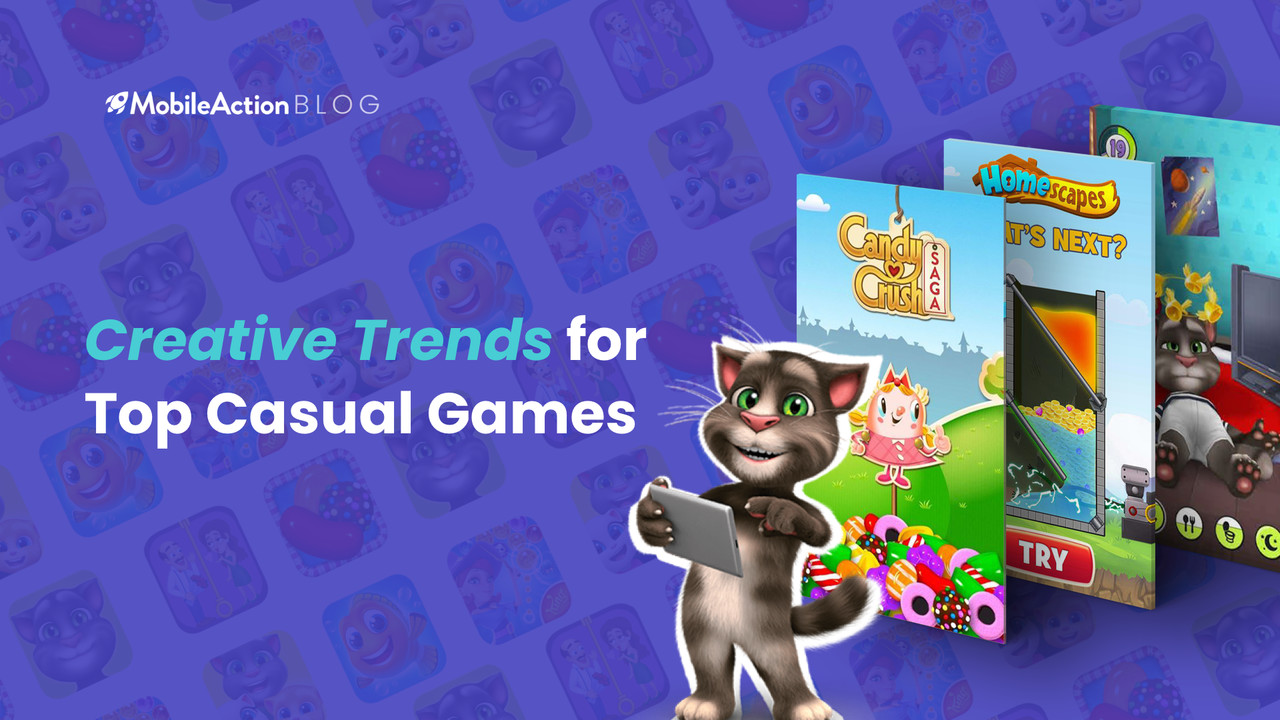 Amongst all games, casual games might be the easiest to love and get addicted to because of the simpler game-play and narratives they offer. They target a wider audience. Anyone from a bored kid to an adult on their way to work can play them. Just kidding, please don’t game and drive 🙂

Unless you’ve been living under a rock for the past couple years, you’ve surely heard of Candy Crush Saga, My Talking Tom, or Homescapes. You probably even know their publishers. Surely they didn’t become a-class games overnight but have applied certain marketing and ad strategies to reach success.

The success of big names doesn’t have to be a mystery, it takes a quick creative analysis, and you can already get a clue about what they’re doing right and implement to your own UA strategies. In this detailed ad analysis report, we will be comparing Playrix, King, and Outfit 7’s data for both Android and iOS to see what approaches they’ve applied.

Here’s a list of the publishers and their games in the casual category analyzed. While deciding which publishers and games to analyze, we took into account whether they were in the Top 10 App Publishers with 5 or more games and if they made casual games.

Creative types: Currently on our platform, we support the viewing of 8 media types. These are video, image, interstitial, banner, interactive, rewarded, endcard, carousel.

Another interesting point here is; even though Outfit 7 has the least number of creatives, its active creative to total creative percentage is higher than the others. And since their total to active creative ratio is high, we can come to the conclusion that they’re making use of their creatives more efficiently.

One of My Talking Tom Friends top video creatives, a good example for a casual game ad. It looks attractive and easy to play, just what you’d want from a casual game 🙂

Here we can see that the average category rankings of Playrix games seem better than King and Outfit 7.

Playrix games averages are better on Google Play Store again. However, the difference is negligible.

As seen in the graph above, Playrix uses more Ad Networks than the others. This helps in distributing their ads widely.

On Google Play Store, King and Playrix seem to be head to head, while Outfit 7 is less aggressive than the two.

Total averages show us that Playrix is the most aggressive with using Ad Networks, it’s above the average (of the 3 publishers) on both app stores.

Which Ad Networks are being used mostly

What to Takeaway From Top Publishers like Playrix, Outfit 7 & King