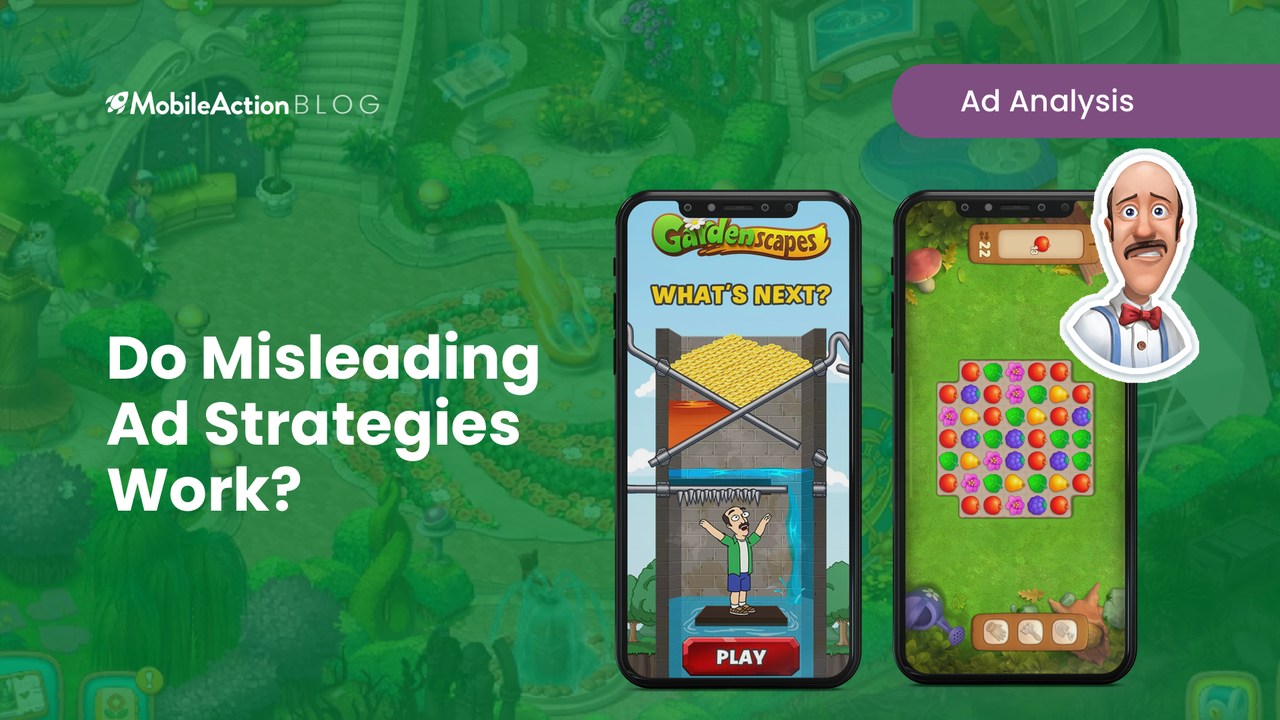 In the cut-throat world of games, it is definitely challenging to get your ads to be seen everywhere. If you are on any social media platform at all, you probably have come across Gardenscapes ads, more than once. If you couldn’t resist their constant ads and decided to download the game, you would know that it looks a little different than how it’s advertised, or a lot different actually 🙂 This is part of Gardenscapes’ ad strategy.

A mobile ad strategy is your plan to reach users in hopes to get them to download and install your app and in return boost your revenue. With mobile ad strategies, there are so many routes to take, possibilities are endless. The end goal and core of advertisements, however, are “being noticed”. After this first step, it is up to how attractive your ad is to the users and getting them to want to download your app. The last and arguably the most challenging part is to retain users. This is the reason why some mobile games might choose to do “misleading ads”.

Gardenscapes by Playrix isn’t the only one to follow such a strategy. Though it might seem like an inconvenient one to follow, for the averages a strategy like this would be expected to end with users uninstalling the app and that doesn’t sound like good business at first thought. Since Playrix continues to use this strategy, it must be seeing some kind of benefit from it. Let’s go over to Top Advertisers and try to understand their reasoning behind this unconventional strategy.

Gardenscapes as a Top Advertiser

Competition in the game world is fierce but despite this, Gardenscapes has never lost its place in the top 7 in Top Advertisers list in the past year. And for the past week, it’s been 2nd in overall advertising. Its total impression score from June 11th to June 18th is 172.221 and has a creative count of 1856. When we look at the numbers for the past year total impression score is over 3.6 thousand with a creative count of 5709. We can definitely say Gardenscapes has been following an intense and aggressive ad strategy for the whole of last year.

Above is the Campaign Analysis of Gardenscapes. We can see that it is active in a total of 13 ad networks. The list is in order of most to least used, Mopub being their main ad network. Having the number of ad networks they do, we can see that it’s determined on getting downloads through in-app advertising more than most of the games & apps in the market.

Its total publisher count is over 9 thousand, which is very competitive.

Just to give you an idea of how big that number is, TikTok, which is arguably the trendiest app on the market right now has around 10 thousand publishers count.

It is active in a number of different countries with its ads, the majority of the focus being on the United States and Korea.

It uses mostly video creatives, which is a common choice with games as its supposed to be reflecting of UX and gives the user a feeling of real gameplay.

However, as we have mentioned earlier in the post, Gardenscapes doesn’t exactly show real gameplay through its ads. Instead, their ads and games could almost pass for two different games. Some users might feel like they’re being fooled by these types of ads. But, it might be good to add here that users can always check the apps page on the app store before downloading, in which Gardenscapes actually does show real screenshots and short videos of the actual gameplay.

It’s like this; you see a chocolate glazed cake and you buy it without reading its label, thinking its chocolate-flavored because you were fooled by hungry eyes and its ends up being strawberry 🙂 You can’t be too mad at the baker for wanting to make their cake more attractive and the same goes for all businesses actually.

As we have already covered, Gardenscapes has been a top advertiser for over a year, which shows that they follow a very aggressive in-app ad strategy by pushing many creatives to users and trying to get as high impression score as possible.

Now let’s take a look at some of their different ads.

Let’s go over to the Top Creatives tab from our Ad Intelligence tool.

Here we can choose to filter out by app category or app title. After typing in Gardenscapes, we are able to see their top creatives (their ads with the highest impression scores). Their top creative types mostly include videos, images, and interactive ones. (If you haven’t read our recent posts covering all different ad types you can do that first.)

We see that Gardenscapes has tried different subtitles with different creatives as part of their ad strategy. Like “You’ll want to play 24/7” on one of their interactive ads. This isn’t the only one though, they’ve experimented with multiple subtitles. Other examples include “Think you can do better? Make sure you’re up to the challenge” and “gorgeous gardening game”. You can also see here which apps the ad appears in and their shares.

This is the window where you can see all the different subtitles and titles of each top creative and their given impression share contributions for each combination. You can also see the countries the creative is available.

Top 3 creatives of Gardenscapes are all images and Facebook is their ad network.

What do users think?

Surely users have something to say about a game they downloaded after seeing its advertisement. Let’s go over to our Review Analysis tool and see some of them.

Most of the one-star ratings include users showing their dissatisfaction because of false advertising.

Some users, however, seemed to enjoy the game despite the false ads.

And some users simply enjoy the game for what it is, not seemed bothered by the false ads.

And when we look at the Review breakdown we see that 5 star and 1-star ratings are indeed the majority.

If you’re planning on applying such a strategy yourself, we suggest doing it at your own risk. It might also be good to keep in mind that negative reviews and possible uninstalls could result in negative retaining and ROI.

• Aggressive advertising. Misleading or not, Gardenscapes is aggressive and persistent with their ad strategy.

• Different title and subtitle combinations with their creatives.

• Using a lot of different ad networks to get the maximum out of in-ad advertising.

Gardenscapes is a game by Playrix, which has other games that are also aggressive with their ad strategies. We have covered Fishdom before.

Though Gardenscapes ads may come off as misleading, it is as the name suggests, a strategy. And one that works. Like all ad strategies, having a misleading one would come with its pros and cons, but having attractive ads brings traffic and a high impression score. It could also be increasing their DAU.

Entering and staying at Top Advertisers is no easy task, and one way or another, Playrix’s Gardenscapes has managed to achieve this by grabbing users’ attention and being constant & persistent with the ad strategy they have chosen to follow along with. The titles and images in in-app creatives they use, challenge and urge users to download the game somehow.

As we have said at the beginning of our post, any kind of strategy is a plan you make for success. And for that persistence is key.

For competitors, a bit of good advice could be to try different things. Albert Einstein is widely credited with saying, “The definition of insanity is doing the same thing over and over again, but expecting different results.”

If you need to change your ad strategy, think of using something different. We suggest you go in deep in what Gardenscapes is doing with its ad strategies. But take it with a grain of salt, as we have covered, misleading strategies can be a hit or miss.

We hope you enjoyed this blog post about Gardenscapes’s ad strategy. Let us know your opinions in the comments and don’t forget to subscribe to our newsletter for more actionable insights.

Interested in seeing more about Playrix and other big publisher’s ad strategies? Check out Campaign Analysis to find insights about user acquisition strategy for any app.

Schedule a demo and let us show you more insights about the in-app ads world.