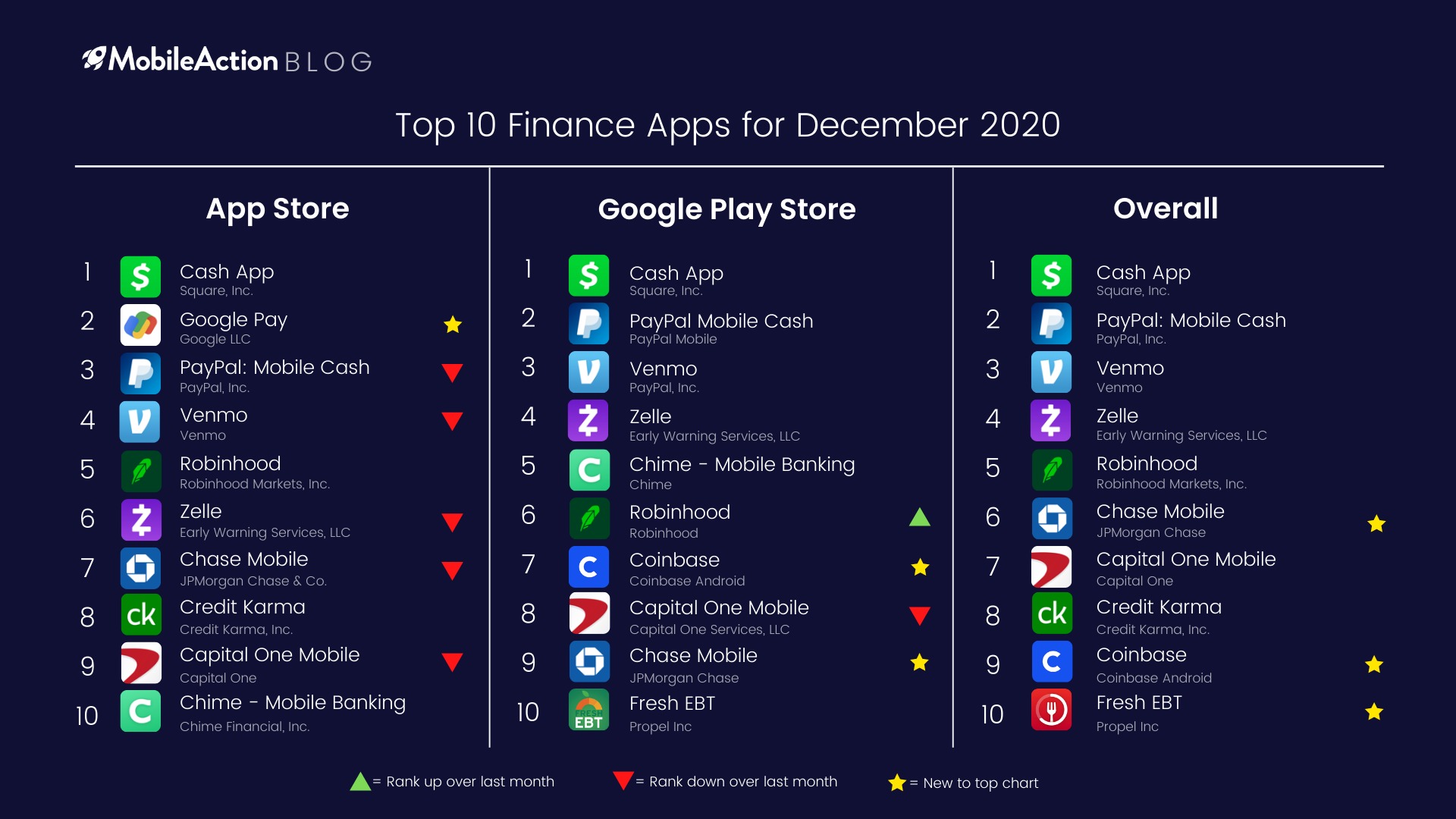 Financial Technology (FinTech) apps are rapidly increasing their popularity.  Any app that makes financial processes easier is considered to be a FinTech app. We have sorted the top 10 finance apps by downloads in the U.S Google Play Store & App Store. Additionally, we also looked at changes in these charts between November and December 2020.

PayPal, the payment processing app, is one of the strongest players in the category. CashApp is yet another powerful app that is regularly on the top charts. Users are able to use CashApp both for money transfer and investing.  When it comes to trading, perhaps there is no better-known alternative than Robinhood. Due to the pandemic, many people have started trading to pass time, helping the growth of the app. We have already covered the success story of Robinhood on our blog.

App markets are great places to observe human behavior. Another trend that seems to be getting traction is investing in Bitcoin. In case you missed it, the cryptocurrency reached a new all-time high, hitting 35,000$ as of January 6th. Consequently, apps that allow users to trade Bitcoin are also becoming popular.

Coinbase is one of those apps that is rapidly increasing its user base thanks to the popularity of cryptocurrency trading. Top 10 finance apps charts include apps that are relatively stable as they are major players in the field. Thus, Coinbase captured our attention by making an entry into these charts. So how did Coinbase manage to secure a spot among the top finance apps? Let’s take a closer look, using MobileAction’s app market intelligence tools.

Taking a look at Coinbase’s Category Rankings, we can see that the app is increasing its share in the App Store. Even though the app was already ranking high amongst the top free finance apps, recently they have been increasing their overall ranking as well. During the last month, they managed to increase their overall rankings by 38 spots, securing their place as the 51st app in the overall charts. This sudden increase in category rankings indicates that the popularity of the app is increasing. It will be interesting to observe the rankings of the app as Bitcoin keeps increasing its value.

As cryptocurrencies are increasing in popularity, apps such as Coinbase will naturally increase their organic downloads. In the next section, we will take a closer look at the ASO health of the app.

However, utilizing paid growth is important for growth is still important. Top Advertisers is the perfect tool to discover changes in paid growth strategies. In the case of Coinbase, we can see a dramatic increase. The app climbed 698 spots in the Top Advertisers chart, indicating that they are increasing their efforts in the paid growth aspect. Using the Top Creatives tool, let’s conduct a mini creative analysis on Coinbase.

As we always emphasize in our posts, keeping up with trends is crucial for your app business. These trends do not only include app store related factors, they also include the developments that happen in the real world. Coinbase certainly paid attention to developments, as they released this creative soon after Bitcoin hit an all-time high. “Bitcoin is at an all-time high” is a very clear statement with the potential to capture the attention of many people. Even those who are not even slightly interested in cryptocurrencies.

Yet another important practice for any creative strategy is diversification. By displaying different features of your product in creatives, you can potentially increase your tap-through-rates. Coinbase also includes resources and news for new-comers to increase their crypto-knowledge.  This way they can target both seasoned traders as well as people who are just starting.

When we look at its ASO Report, it is clear that Coinbase is an organically strong app. A visibility score of 90 is very respectable and suggests that it is rather easy to come across this app if you search for related keywords.

Coinbase is currently ranking for 2568 keywords. For 462 of these keywords, they are ranking first. To get a better understanding of the source of their organic downloads, let’s take a look at the Keyword Intelligence tool.

Some applications already have strong brand names such as Walmart. In our Top 10 Shopping Apps Worldwide for November 2020, we analyzed how such brand names can result in incredible amounts of downloads. Walmart was ranking for considerably fewer keywords, however, because people were directly searching for the brand name, their app was organically strong. Thus they did not need an aggressive paid growth strategy.

In the case of Coinbase, we can see a different situation. They are receiving approximately 29 percent of their organic downloads from their brand keyword. The rest of the organic downloads come from generic keywords that are used to search for apps in the category. By ranking on different keywords such as “bitcoin”, “blockchain”, “crypto” and more, Coinbase was able to increase its popularity. Once again demonstrating the importance of a solid ASO strategy.

Finally, let’s take a look at the user characteristics of Coinbase with our Market Intelligence tool.

As mentioned before, it is clear that Coinbase greatly increased its user base since the start of the pandemic. The estimated monthly active users for the app seem to be still in an increasing trend.

For now, it seems that most of the users of the app are from the United States. However, as crypto trading becomes more popular with new participants joining the market every day, it is likely for this distribution to get more evenly spread as the app increases the locations it operates in.

The increasing popularity of the cryptocurrencies paired with the pandemic certainly created a fruitful environment for FinTech apps. Coinbase, an app that allows users to trade cryptocurrencies has made it to the top of the US charts in December 2020.

The organic strength of the app allowed it to generate organic downloads. Recently the app is also increasing its paid growth strategies as we can tell from the Top Advertisers list.

Coinbase is ranking on a lot of different keywords, and they can draw in lots of users that are searching for apps in the finance category. Nearly 70% of the apps downloads are coming from non-brand keywords, which indicates the importance of an effective ASO strategy. If you want to use MobileAction tools to create your own effective ASO strategy, schedule a free demo now and let us show you the power of our tools!