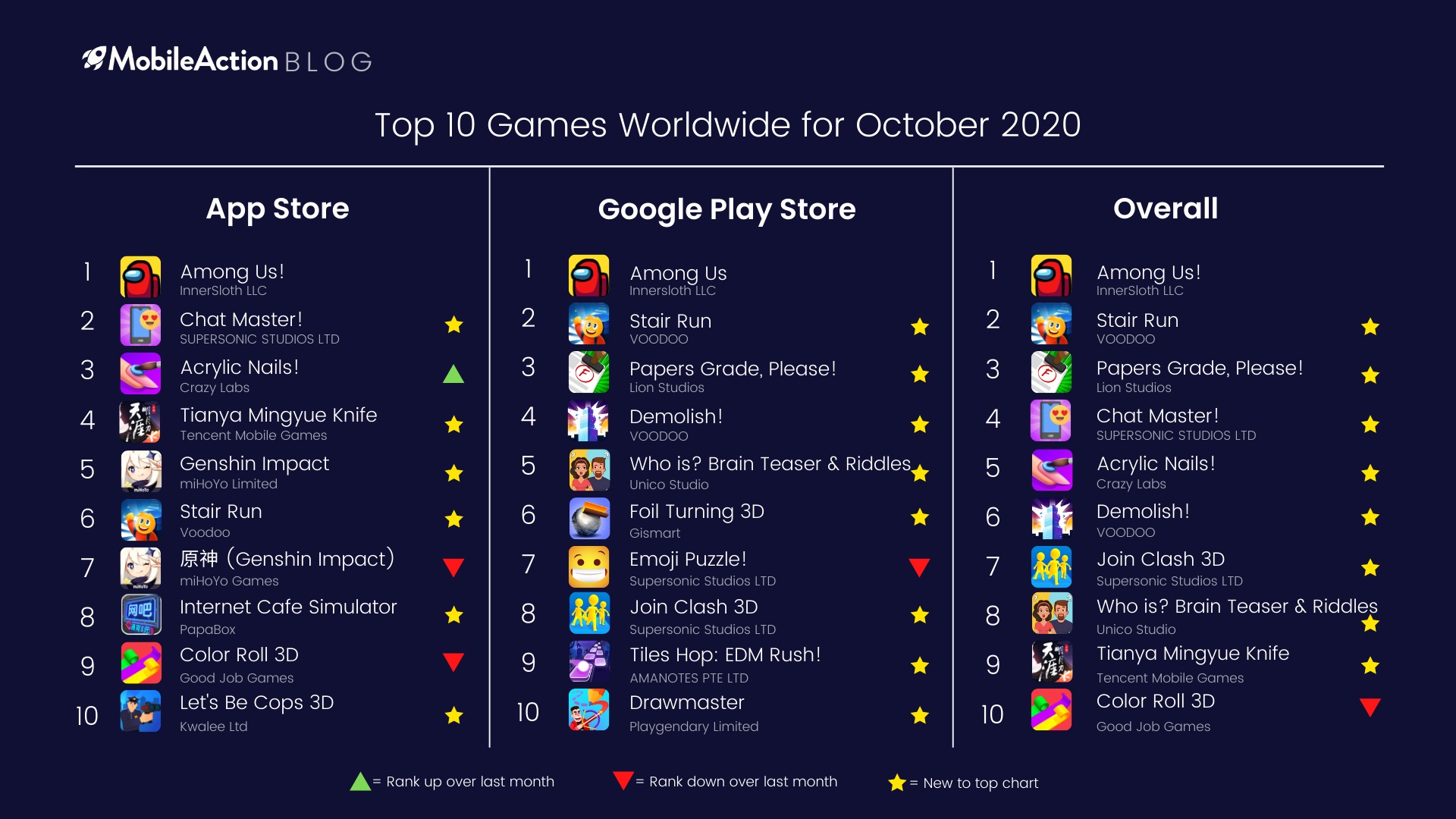 As the COVID-19 pandemic is still going on, mobile games have been a great distraction as well as a hobby for many. We feel emotions varying from being relaxed, engaged, interested, and excited all at once. Mobile gaming is and has been an industry giant and continues to dominate the market. We’re here to uncover the top 10 games for October 2020.

We’re very interested in the top 10 games every month of the year. Compared to other categories, the game category shows many fluctuations every single month. An aggressive advertisement strategy, creatives that blow people away, an interesting game flow are only some of the factors that affect the changing nature of the top 10 gaming apps.

The above chart shows the top 10 games worldwide for October 2020. We’ve got 8 newcomers to the top 10 charts when compared to September’s top 10 game apps. We analyze both top iOS games and top Android games to get an overview of the chart. The apps are sorted based on their download estimates.

Let’s check and see how they’ve gotten their organic downloads and their popularity around the world.

Among Us! has kept the crown as #1

Among Us! has managed to keep its title for being #1 during October 2020 as well. We’ve covered its success and what steps they took back in September and mentioned it in our Top 10 Games Worldwide for September 2020 blog post.

We can see that second place belongs to Stair Run by Voodoo, which is a hyper-casual game on the rise. Hyper-casuals are the gold mine of the game apps and are easy-to-play and usually free-to-play games. People love playing hyper-casuals for a lot of reasons. When you get the hang of it, there is no hyper-casual game you will not be able to play!

We’ll be focusing on this particular app to see how it has reached success and what strategies they might have used.

The first step we can take is to check the App Intelligence page, here we have a chance to see the Daily Review Breakdown.

I’ve specifically wanted to stress that there has been a change after the update made on October 6th, we can see that the graphic shows an extraordinary increase after that specific date.

Let’s check and see what they have changed.

Here we can easily see what they have changed since their last update. With this update, the app seems to have taken off! If we want to analyze what else has changed, all we need to do is click the small arrow on the left of the date above.

In the above video, we can see that they have changed quite a bit and played with the details. They’ve changed their App Icon, which is quite important. Check the above video to see how the old one was and how much more fresh and representative of the game the new visual is.

Sometimes the smallest details help increase the downloads of an app, especially game apps. They’ve also made bug fixes and added/removed from similar apps. Choosing the correct similar apps are extremely important! Imagine you have the one-and-only mobile game that you love and plan your life according to how much you dedicate time to play it – yes, this is extreme, but we know that it is reality – you would look for similar games to download and play. The game you love is like the portfolio of the games you search for!

Next, we can check to see the Top Charts. What we’ll do is we’ll first check October 6, the date the update was made and then we’ll check October 7, right after the update.

As you can see Stair Run has directly gone from #18 to #4 just after the update! Before the app update, they were a normal app that did not really stand out from the crowd.

Another important detail we have to focus on is their creative strategy. All the data and input we receive about the creatives is an important indicator of how they’ve played their cards.

When we focus on Campaign Analysis we can observe if they’re spending much on different ad networks, see which creatives they prefer to use, the number of impressions on these creatives, and basically their creative strategy.

Here we can see that their ranking is 342nd in overall advertising. There are a lot of ad networks which helps us understand that they’re spending quite a bit on different networks. Their ad publisher count is 4263 and we know that the majority of their creatives are videos, then images, interactive and last being Html.

Another guide that would be useful for us is definitely the distribution share:

We all remember that they had an update on October 6, we can also see that they have switched their advertising strategies, didn’t stick to Applovin and Facebook only, and started to utilize multiple ad networks!

We can jump on to the bottom of the Campaign analysis page and see which creatives they have benefited from and we’ll have a clearer understanding of which path they’re going.

Here’s an overview of how you can check further with these creatives:

Here it’s clear that the highest impressions are from Mintegral and the lowest scores are from Facebook Native, Instagram etc.

It’s important to keep in mind that there are numerous tips and tricks that will take an app from “just eh” to the top 10 games list. It’s not always as easy as it seems to maintain this success and when it comes to creatives, a mix and match of strategies will do magic. Especially the top free mobile games are always under the microscope. It’s such a competitive industry that no matter how many times you have changed your strategy, there is always a better performing game.

We hope you enjoyed this blog post. The data is sourced from our ASO Intelligence, App Intelligence, and Ad Intelligence tools. Utilizing different tools and creating a combination of strategies helps us understand how to spot an app’s growth paths.

Interested in learning more about our data? Schedule a demo with us!