From hammer attacks, to getting run out of San Francisco, to the use of ridesharing apps to find dates, it has been a rocky road.

…and there’s a lot more to come. 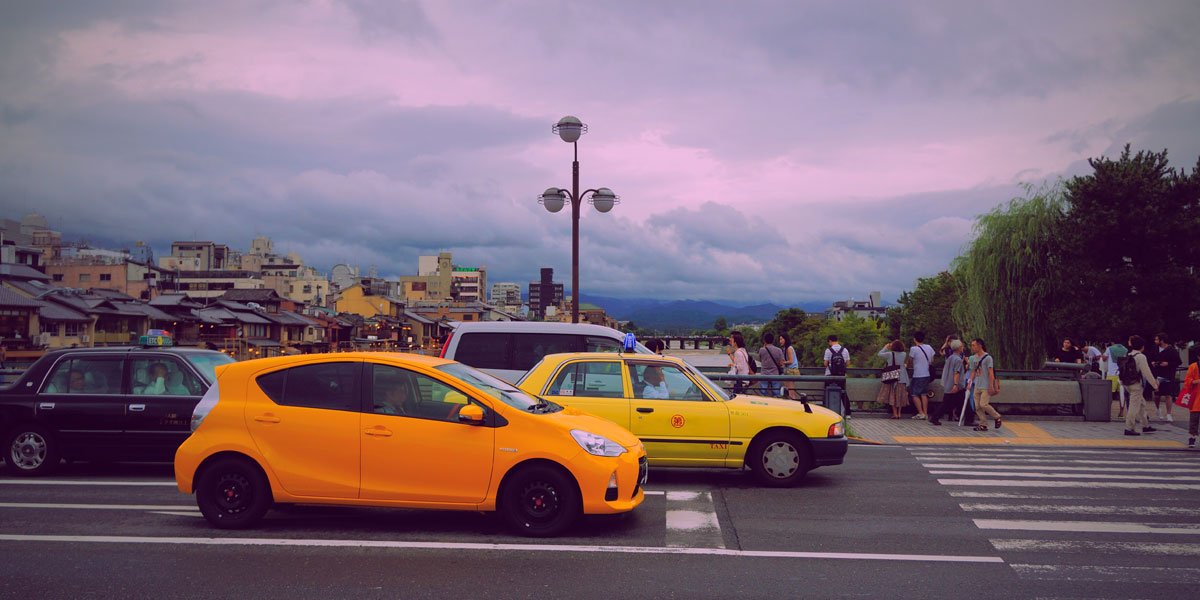 In light of President Donald Trump’s decision to ban immigration from seven countries, things in the ridesharing world just got a little more interesting. For the first time ever today, Lyft has passed Uber in estimated daily downloads.

Here’s a look at this historic event on the Apple App Store. 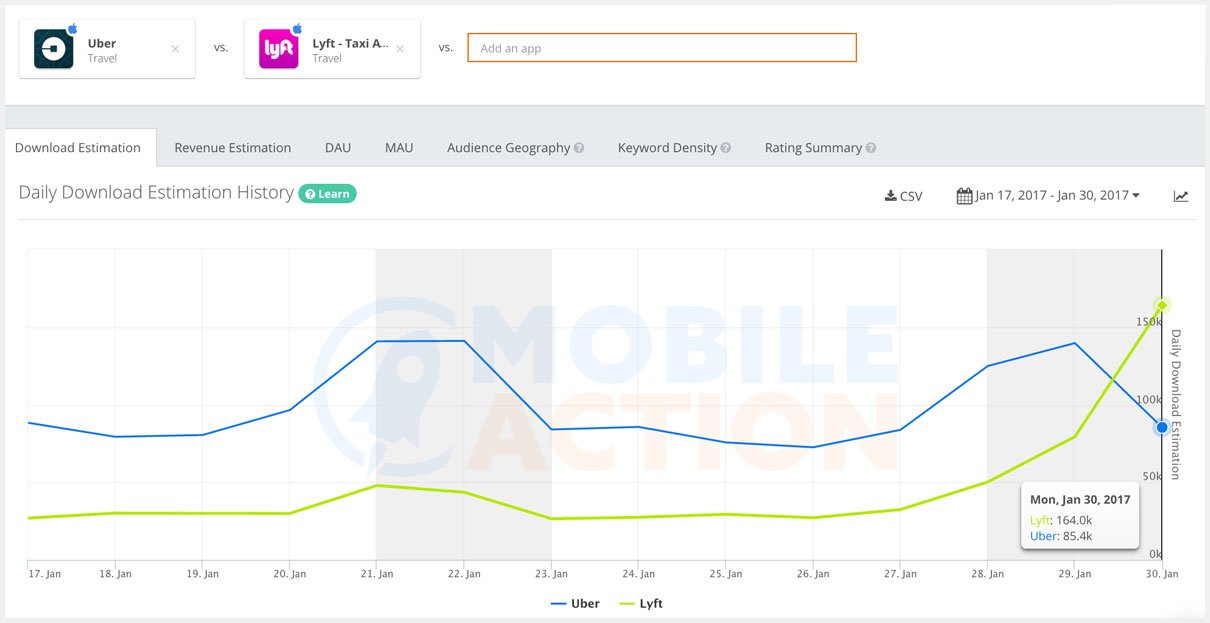 In this post, we will take a closer look at how this happened and what this means for app marketers.

The Reign of Uber

Before we get into how this happened, it’s useful to understand the context of why Lyft overtaking Uber in downloads, is such a big deal.

Although Uber is burning through cash, they have raised more than four times what Lyft has raised. This has helped establish Uber internationally, while Lyft has had to partner with ridesharing companies in other countries to expand its international presence.

So it’s no wonder that the downloads of Lyft have always historically trailed Uber. The gap has usually been significant.

Here’s a one year history of estimated daily downloads of both apps, in the US. To compare these apps and other ridesharing apps, sign up for Market Intelligence.

Now let’s take a look at how this happened…

Support for the Protesters That Led to #DeleteUber

At the same time, the NYC Uber Twitter account announced that there would be lower prices on rides out of the airport. If this was intentional (to take advantage of the strike), or just a stroke of bad timing, is not clear.

Surge pricing has been turned off at #JFK Airport. This may result in longer wait times. Please be patient.

However it is clear how this event affected the downloads of the Uber and Lyft apps.

Since Uber CEO Travis Kalanick has agreed to serve on Trump’s Strategic and Policy Forum, people started to link him to the new Trump policy and accuse him of taking advantage of the situation. This led to the creation of the #DeleteUber hashtag and people posting their screenshots of their Uber account being deleted.

We can see this in the huge increase in negative ratings of the app on Sunday. 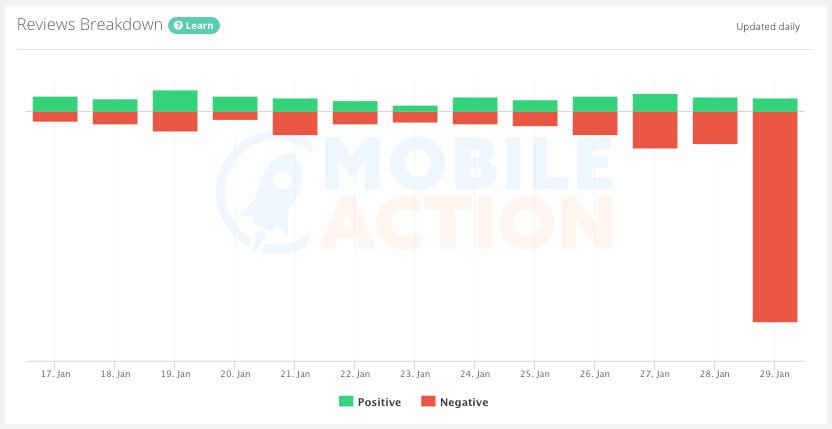 Searching the reviews of Uber also shows us that much of this negative sentiment is the direct result of Trump’s actions and the perceived allegience of Kalanick. 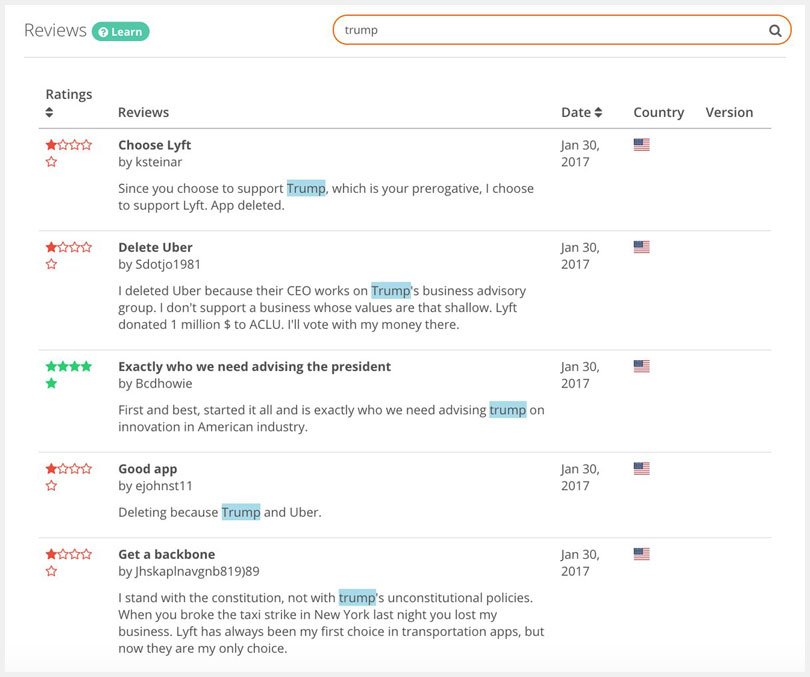 So in addition to thousands of Uber accounts being deleted over the weekend, thousands of people have decided to sign up with Lyft, as new users.

Of course, regardless of Kalanick’s actual loyalty to Trump, it is certainly in the best interest of Uber for its CEO to be an advisor to the President. But this is a perfect example of how public perception (of this relationship) can have a huge impact on why people stop using one app and start using another.

This resulted in a huge win for Lyft.

This adds much needed fuel to the momentum that Lyft has been building. While this download boost was not intentional on Lyft’s part, it is a perfect illustration of how PR can help the underdog overtake the market leader.

So think about how positive PR for your app (or at least avoiding bad PR) can help you with your app marketing strategy.

In the end, this competition is good for all of us. Ridesharing has become an integral part of our lives and it will only get better. Some people have even sold their cars and take Uber exclusively.

« Apple’s Next Update Will Finally Fix App Store Reviews
Tom Brady is the GOAT, but are His Mobile Apps? »