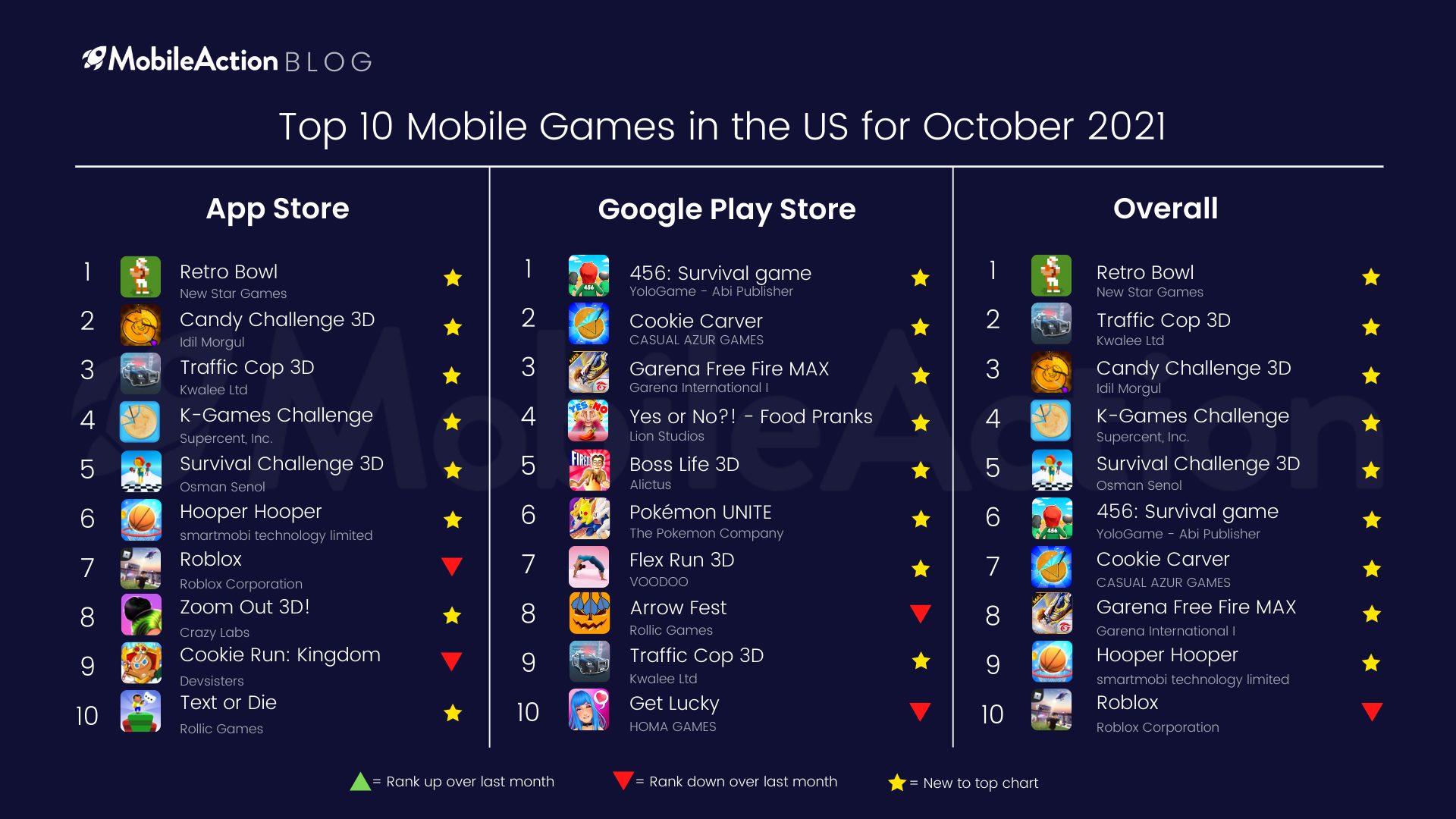 What is the one rule of Barney Stinson? No, the other one. The one that says, new is always better. Well, we don’t know whether it’s true but we know that the top 10 mobile games list for October is brand new. The only game that managed to stand its ground is Roblox and even they lost a few ranks.

So, what has caused this change? Let’s start with the most obvious one.

When we look at the list, we see almost half of these games have either “survival”,  “challenge” or “game” in their app titles. It is interesting because it shows how a trend can affect the mobile game industry.

Squid Game aired its first episode on September 17th and now they are literally everywhere. From the third to the sixth, all those games are about Squid Game. Because users are searching for Squid Game where people are challenged to play a survival game. These mobile game developers responded to this demand and now they are enjoying their success to the utmost.

But of course, a good game that cannot be found by users won’t bring any success. App store optimization and a solid app marketing strategy are a must. That is why we are going to analyze Retro Bowl, Candy Challenge 3D, and Pokemon Unite to enlighten you about their successful mobile user acquisition strategies.

Now, let’s begin by talking a little about the Google Play Store’s winner on the top 10 mobile games list for October 2021.

The first-ever Pokemon game was released in 1996 and it was a big hit. The success of this mobile game is a little bit related to their huge brand name. A brand name will get you somewhere but not to the top, not by itself. You also have to have a solid marketing strategy where you determine a target audience and a plan to reach them in the right way.

When we take a look at their campaign analysis, we see that they are trying to catch’em all. Especially the users in far east Asia.

It is also seen that Pokemon Unite is localizing their ad creatives for their target audience.

In the last month, they have only worked with three Ad Networks. In most cases, we see social media channels such as Instagram, Facebook, or Snapchat in ad networks. While most apps put more weight on social media platforms like Instagram or Snapchat, Pokemon United decided to go with Youtube. And,  according to the statistics, Youtube’s main demographic is females with kids. It seems like a good fit for Pokemon ads, doesn’t it? Although the percentage is low for now, the focus might shift to Youtube in the future.

Now let’s take a look at their ad creatives.

See how they localized the elements in this ad creative? Moreover, we see that they are utilizing a descriptive ad creative with real game footage. This type is always a good idea because it shows users what to expect from the game. In this way, the possibility of unsatisfied reviews will be pretty low.

Charizard and Pikachu? The two most popular pokemons of all time? I bet you guys still remember the scene where Ash and Charizard sleep under the rain. If you have this kind of opportunity where you can benefit from nostalgia and sentiments, you should definitely do it to connect with users on a more personal level.

Retro Bowl is number one on our Top 10 mobile games list for October. The visibility score speaks for itself. It means that users see Retro Bowl at the top of the search results for highly popular keywords.

As our ASO Report shows, they are ranking in the top three for 1300 keywords. Moreover, most of these keywords have extremely high search scores.

When you are ranking in the top three for keywords that have search scores over 70, you can expect to get a good amount of organic downloads. Therefore, we can say that New Star Games did the pre-work by making their app visible to the users. The next step of user acquisition is, as you know, conversion. On this subject, their user base plays a significant role.

The user base is extremely happy with the game and they are showing their appreciation in the reviews section. They have over 15k five-star reviews compared to only 143 one-star. Meaning that when users search for a game and come across Retro Bowl, they see nothing but positive comments.

App Reviews and ratings can be beneficial in many ways. Firstly, as mentioned above, they increase conversions. Secondly, you can find some bugs that went unnoticed and new ideas to improve the game.

Our App Intelligence tools allow you to find out the most mentioned keywords in an instant. You can filter the search by keyword and ratings. In this way, you can easily locate problems and complaints about your app. By the way, you should try to respond to these negative comments as often as possible because it shows that you care about your user base, which can convert those negative comments to positive ones in the future.

As mentioned above, people were crazy about the Squid Game in the last month. They searched for the keyword “Squid Game” so much that it became one of the most popular keywords.

As our Keyword Trends feature shows, its search score went from 16 to 80 in less than a month. And, Candy Challenge 3D was the most downloaded game among the other Squid Game apps. The most significant reason for this success is their use of Apple Search Ads.

As you can see, Candy Challenge 3D is not ranking in the top three but is the game that gets the most impression share for this keyword. Although K-Games Challenge is organically ranking the first, their effort was not enough to overtake Candy Challenge 3D who benefited from Apple Search Ads.

These are some of the best-performing keywords for the Apple Search Ads campaign of Candy Challenge 3D. As we can see, they get the most impression share for “k-games”, a competitor brand keyword. This paves the way for Candy Challenge 3D to take some impressions from K-Games. However, we can also see that Candy Challenge 3D defends its own brand keyword with Apple Search Ads although they organically rank the first. Moreover, for some keywords, they appear at the top of the search results even if they don’t organically rank.

Not running Apple Search Ads is not an option, anymore. And for a successful campaign, a holistic approach as Candy Challenge 3D is a must. Monitoring and managing every keyword can be challenging without a management platform. Our SearchAds.com allows you to use automation tools and benefit from keyword auction insights to get the best results. In this way, you can save time and money while maximizing your growth.

Well, we have come to the end where we take a glimpse of the mobile user acquisition strategies of Candy Challenge 3D, Retro Bowl, and Pokemon Unite but if you wanna be the very best like no one ever was, you should schedule a demo with our experts now! Let’s lay the base of your Top 10 Mobile Games journey, together.

« The Grand Mafia: How to Build A Killer Ad Strategy
Track Your Mobile Ad Creative’s Journey with MobileAction »