Blog How Do App Reviews and Ratings Affect Your ASO Strategy?

How Do App Reviews and Ratings Affect Your ASO Strategy? 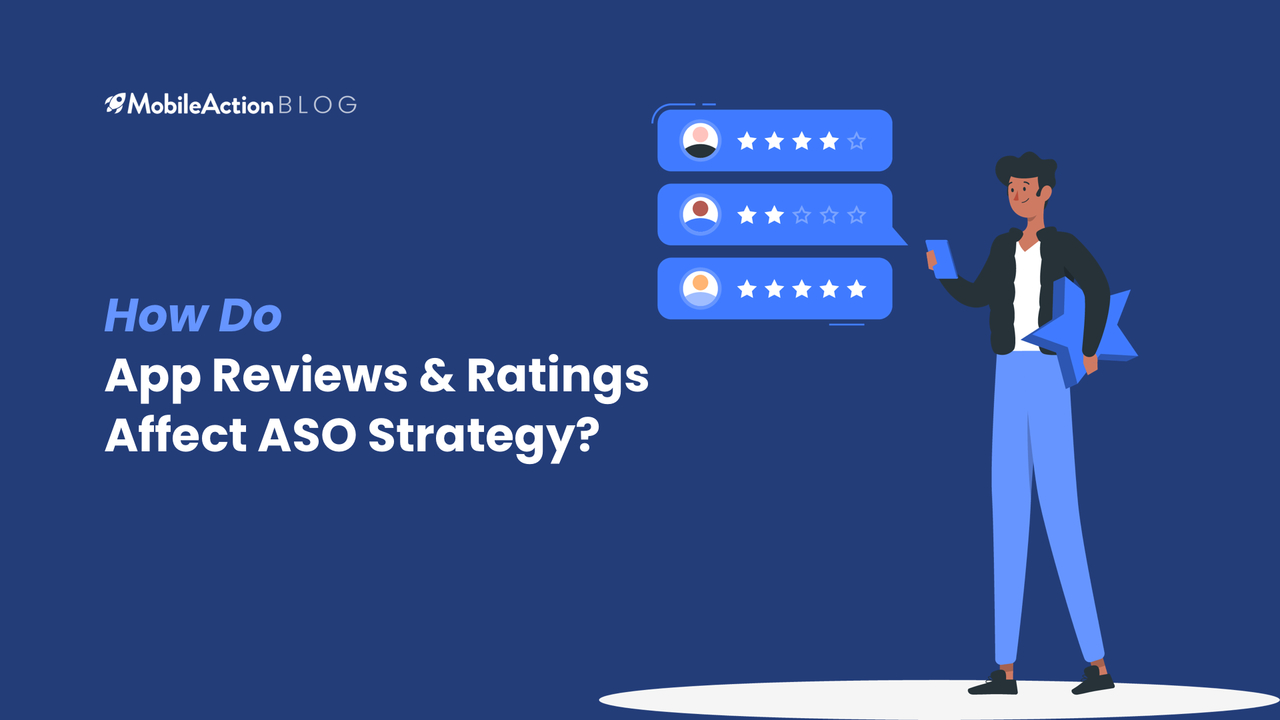 The number of apps in both of the two major app stores are up to six million and increasing day-by-day. When both Google Play Store and the App Store were announced to the public back in 2008, of course, they didn’t have so many apps under their wings, but today it is a different story.

There are more apps added to each app store every day and the level of competition is higher than before. Therefore, app reviews and ratings play a key role in the success of the apps available in stores.

If you’re producing an app there is usually at least 1 app that is similar to yours, so in this battle where every aspect makes the difference in winning the user’s attention, you need to win the attention.

People need to decide which app to download. But what are the factors that potentially might influence the decision? The answer is; “other people’s opinion”, for sure.

Certainly, the “social proof” plays the role of a decision factor. It is the time when App Reviews & Ratings come into the play.

Ratings & Reviews are one of the important factors in ASO (App Store Optimization), yet many developers keep neglecting it.

On this blog post, we are going to highlight the main points on how useful reviews and ratings are and in what ways they do affect ASO.

An app review is generally an independent, objective way of describing the dichotomy of views through the user’s eyes.

Basically, it is a form of marketing that is trusted by people. It shows what to expect from the app as a future buyer. App reviews can be either positive or negative.

Below is a screenshot from Uber technologies review breakdown in the period from March 1st to April 1st, 2020, Reviews by MobileAction Chart: 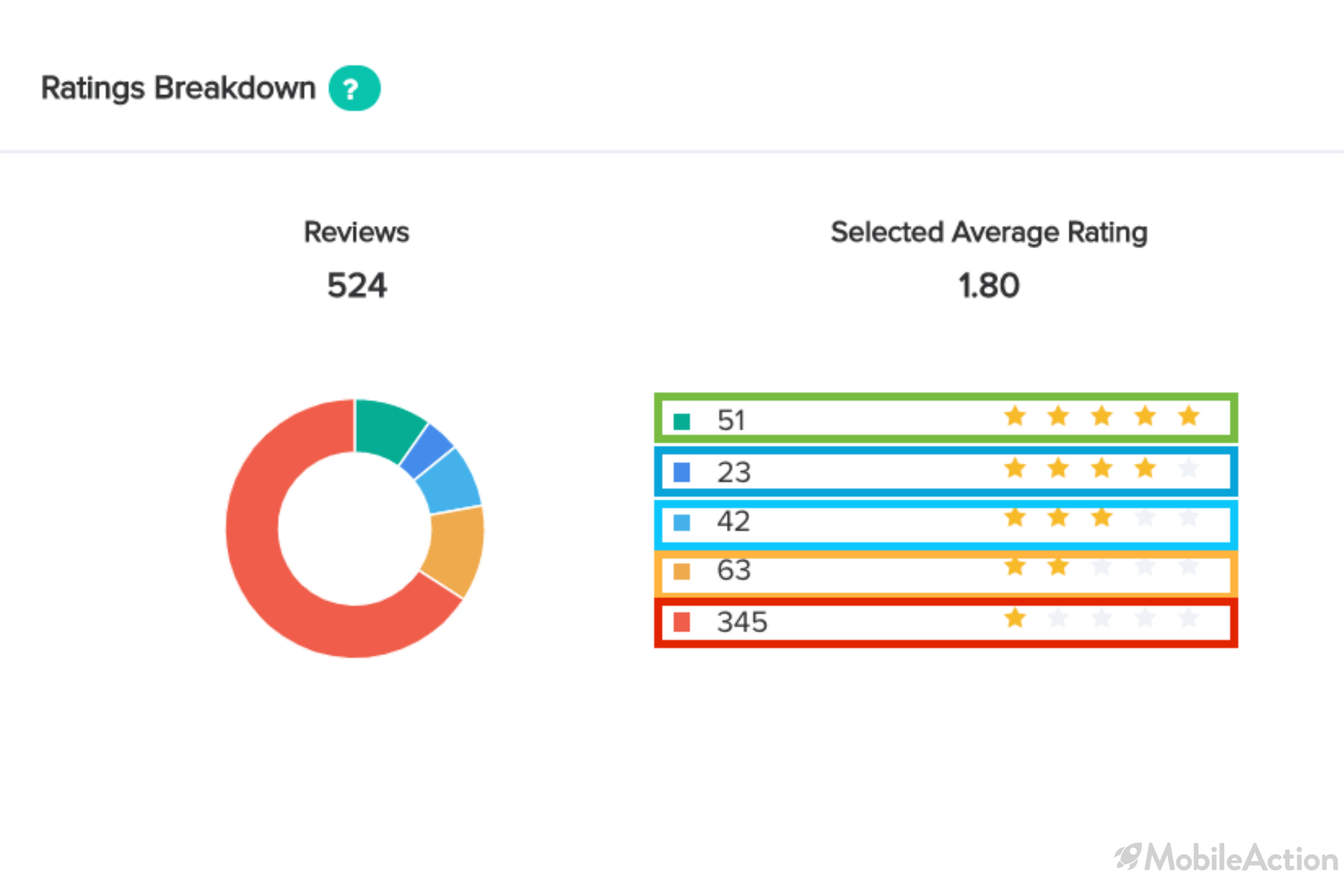 To see a deeper review analysis we can take a look at Most Mentioned Keywords Analysis next to Review Analysis tab. With its graph, you can see the patterns for the most mentioned keywords in reviews and the average ratings with these keywords. You can use filtering for the keywords in the red area to identify potential disturbances in your app. And also, learn what your users truly love about your app by filtering keywords in the green area. You can use this breakdown of the ratings to understand user sentiment. 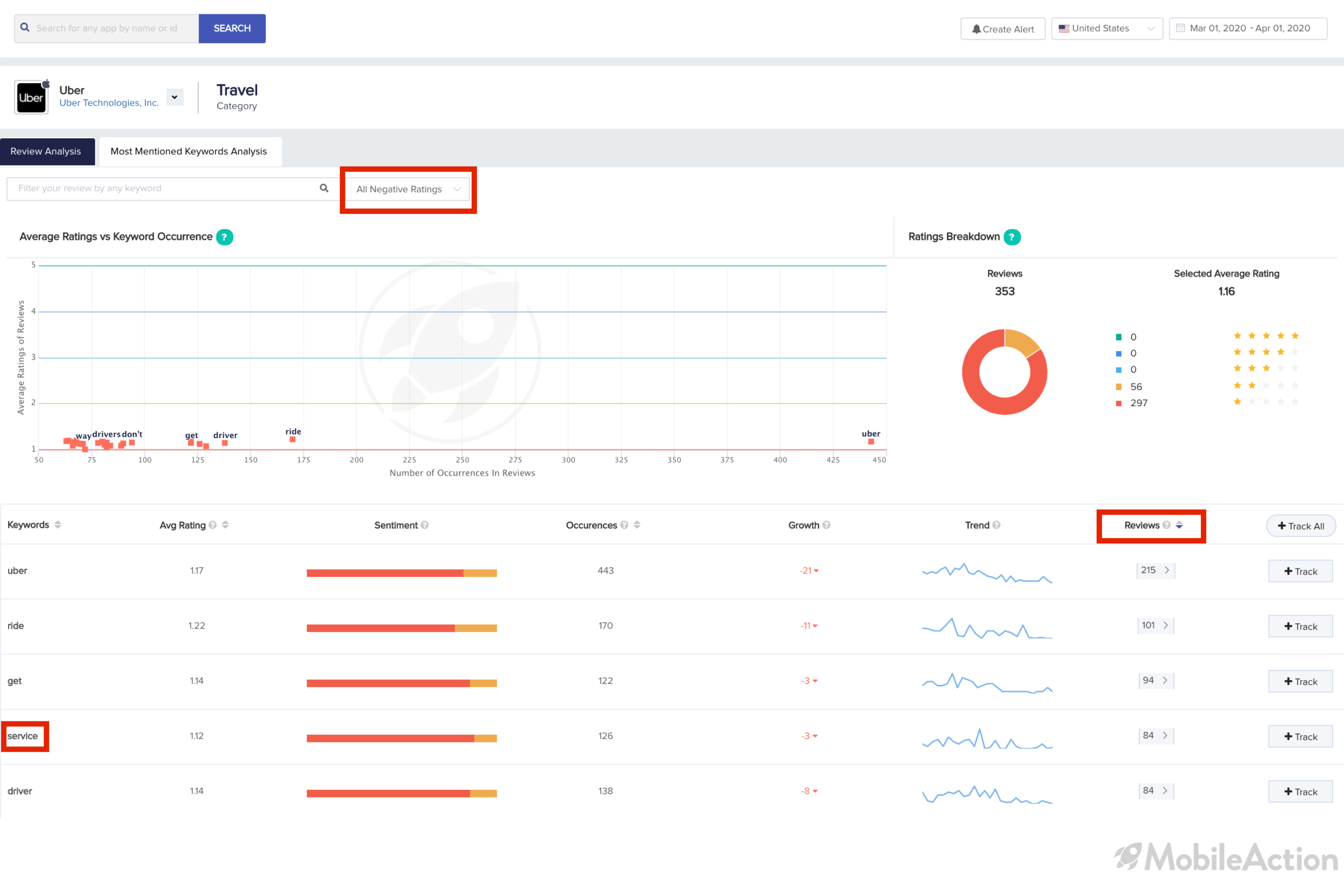 Here you can choose the date and type of reviews, let’s choose the past month (March 1st to April 1st, 2020) and choose All Negative Reviews first. Above are the keywords most used for 1 and 2-star ratings. We can sort the reviews from most used to least used and track them individually in reviews to get a better understanding of their contexts.

One of the most used keywords for 1 and 2-star ratings is “service”. When we look at the reviews with this keyword we can easily see what the customers were bothered by.

When we sort it to see positive reviews here are the most mentioned keywords we got.

We can again choose to track these keywords individually and see them in reviews written by customers.
As you are able to see all kinds of reviews with ease, this tool is very helpful. If you want to improve users’ satisfaction you should be keeping track of the reviews and to not get overwhelmed during this process, MobileAction is ready to help. Schedule a demo with us. 🙂

App reviews are a good source for improvement, meaning that not only positive reviews have an impact on your app, and its category but also the negative reviews do have a contribution to your app.

You might have a question in your mind: How can a negative review positively contribute to your apps’ improvement?

Let me tell you, people put negative reviews when they come across to a certain bug, or when they are disappointed with a specific feature, or when it crashes way too often, while happy end-users just keep using your app.

App reviews that have an average below 3, are considered to be the negative ones. These ones can signal that your app has serious issues or should be stayed away from, resulting in scared users who won’t download your app or won’t even try it.

Ratings and Reviews in App Stores

Make sure to have a look at Apple’s Review Guideline and Google Play Store support to get in-depth details on the importance of app reviews and ratings for mobile apps.

New users: Will have an insight into the app, as what to expect from it.

Developers: Will find out the pros and cons of the app, the general overview of customer satisfaction, the bugs that need fixing.

Current Users: Will have an opportunity to direct access to the developer and give their independent point of view that plays a significant role in this marketing.

Having reviews is also crucial for new businesses as it is the only source of credibility. The keywords in app reviews contribute to the ranking of your app in Google Play Store.

Google Play Search is key for ensuring users meet the relevant and popular apps they’re looking for. Make sure your app makes it in the store listing. This is important to get discovered by Google Play’s users.
A combination of factors is important for this, including; your apps name, description, keywords, reviews and ratings, and previous downloads.

Fixes and updates made to an app especially become important for Google Play Store as recent users’ ratings are used to decide an app’s average rating.

Pro Tip: Try to make yourself available, so that the users can reach you. Answer to negative reviews as fast as you can, and answer individually. Because when you answer, you show to your customers that you do truly care about them, that you are here to fix the bugs, to work out the issues that didn’t go well. This way, you will gain a certain level of credibility as a developer.

App ratings are very related to the reviews, of course. Some users don’t want to spend their time to put a review, but they do rate the app in order to show their feelings. So for the app’s visibility and credibility both the reviews and ratings count.

Rating Count: A number that shows how many times the app was rated.

Bear in mind that the number of ratings and their average, as well as the number of app reviews, has a quite good contribution to the rankings of your app in app store search results.

How to Get Good Reviews

The key point in prompting the user to rate your app is in doing it at the right time and in the right place. As you want your app to get good reviews and ratings, it is crucial to know when to ask for them.

Let’s look at some of the key factors of your app and how they’re going to affect your reviews first.

Besides asking your users to rate you at the right place and the right time (which is crucial to master if you want better reviews) there can be other things to get your app to rank higher. These might cost you extra, but it might be worth investing in. So here are some additional tips:

Replying to your reviews. Even the bad ones, and especially the bad ones! This shows that you care about user experience and are willing to change. Being able to stand behind your own app is, of course, important.

Curious to see reviews of other apps? Schedule a demo with us and dig in the reviews! Learn about your users and competitors.

Why are reviews so effective?

Because it influences other people’s decision making too.

What is considered a bad rating?

Any rating below 3 is considered to be a low rating.

What is the best way to improve my ratings?

Improving your ratings and keeping them that way requires effort and consistency. So, a tool like MobileAction would ease the process.

For whom the app reviews are important?

What’s the first thing to do if I receive a bad review?

Answer as quickly and politely as possible. Make sure to give them a real solution/explanation instead of an empty comment if you want to gain users’ trust.